Evangelizing through our Pastimes and Hobbies

I have a confession to make. It may not be so much of a confession to some of you because you’ve gotten to know me so well, but for the rest of you, I confess to you this: I am a gamer geek. I enjoy playing video games from time to time, I also frequent the gym to keep fit (I love lifting heavy things!), but form of escapism  for me at the moment is miniatures gaming, a game called “HeroClix” which is the perfect union of my appreciation for tabletop games and comic book superheroes. I love strategy games and any opportunity to exercise my brain is a welcome opportunity, but on with some background information … 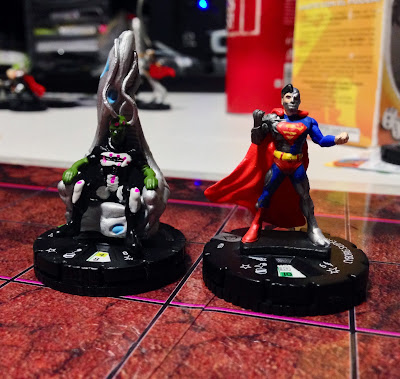 There would have been a time in my life when I would have thought that hobbies and faith/spiritual life should be kept separate. When I was younger – long before I looked deeper into my Catholic faith – I would wear different masks depending on what I was doing. When I was living at home with my mother, going to church every Sunday and going to prayer meetings, I was the “good Catholic boy”. When I was playing competitive sports with my friends or my brothers, I was the highly competitive, win-at-all-costs sportsman with the colourful vocabulary to boot. There was also “gamer Steve” who played online games, chatted with friends online whilst doing so and discussing things and behaving in ways that were very, very contrary to what my saintly Catholic teachers and mentors would expect of me. I eventually came to a realisation that I was hiding my Catholic faith from others when I wasn’t doing “churchy” things. It’s fair to say that I was a timid Catholic and lukewarm; Christ was not at the centre of every aspect of my life.

“Why not make Christ the centre of every aspect of my life? Why not bring Christ into my hobbies?” I thought to myself. There were certainly some hobbies and pastimes that I was participating in that were unnecessary time sinks and that I could very well leave behind. There were, however, hobbies and pastimes that got me out of the house and interacting with people. I was raised in a very cloistered environment where the only people I knew outside of my family and school were church people; other Christians. I don’t regret that one bit but it wasn’t until I got to university that I started meeting people of other creeds, backgrounds, religions, people who lean to the left on the political spectrum, those who lean to the right, etc.

I was annoyed at myself for not being so open with my faith and, at times, hiding it. Yes, my closer friends knew I was a Catholic and had what they described as “traditional values”, but when I was introduced to new people or within certain social groups, I did my best not to discuss my faith. I wasn’t denying my Catholicity, but I was definitely making it very hard for myself to witness and evangelise. Suffice to say I chose my moments very carefully when it came to discussing matters of faith and morals.

Thankfully, as the years have gone on, I’ve been able to speak more boldly and openly about my faith and I love telling people about how much my Catholic faith means to me. So again, “Why not use everyopportunity to share my faith?” So I made a decision: at every moment, give witness to Christ, whether by word or action. There’s a way of evangelising which won’t seem too “preachy” to your secular friends and that is, of course, through your actions and behaviour. As scripture tells us:

“Let your light so shine before men, that they may see your good works and give glory to your Father who is in heaven.” – Matthew 5:16

Let me give you an example…

I mentioned the game HeroClix earlier. It’s a superhero themed miniatures game, and I was never really into miniatures before I got into HeroClix. The person that got me into the game was a a friend of a mutual friend (let’s call him “Clark” just for convenience) who also happened to be Christian but of the “born again” variety. We were playing a game one afternoon where, out of the blue, he said, “Stephen, you’re probably the most Catholic Catholic I know”. Puzzled I looked back at him and asked, “What do you mean?” and he said, “Well, I know a lot of people that say they’re Catholic, but they don’t really do the Catholic ‘thing’ if you know what I mean”. Clark then went on to ask me, “So explain to me this then because I’ve never met a Catholic that could explain it in a way that makes sense: why do you guys worship Mary?” Suffice to say the conversation went on for a quite a bit after that. We finished our game somewhere between 1:30 and 2:00am  (two hours of actual play; three to four hours of impromptu Marian Dogma catechesis) and as Clark was showing me out he said, “I think I understand the Mary thing better now. I don’t agree with it, but I get why you guys do it now. ‘Hyperdulia’, right?”

Sometimes you don’t even need to say a word to start a discussion; you don’t need to start with words to evangelise. For me all it took was for someone to know that I was Catholic and by the grace of God I was about to give them the answers. For the times I do not have the answers, in humility I tell them, “I don’t know, but I will find out for you”.

Granted there have been times when some pretty heated discussions have arisen because someone has “discovered” my religious affiliation (e.g. “You’re a practising Catholic so therefore you must be a bigot”), but the key is to never be the aggressor and to take your ego out of it. Evangelisation is not about you or any effort you make. As scripture tells us:

“… but in your hearts reverence Christ as Lord. Always be prepared to make a defence to any one who calls you to account for the hope that is in you, yet do it with gentleness and reverence; and keep your conscience clear, so that, when you are abused, those who revile your good behaviour in Christ may be put to shame.” – 1 Peter 3:15-16

Your actions must also match what you believe in. This is key. We know how each other think; it’s in human nature to judge the behaviour of others to a certain benchmark. My friends and my gaming buddies know that I am a practising Catholic and therefore I am judged according to that standard; even they have certain expectations of me! Ponder this: what would my peers think of Catholicism if I was speaking and behaving in ways contrary to what our faith teaches? People are not stupid. How can others begin to take the Catholic faith seriously if its faithful are not behaving in ways indicative of the One True Church of Christ? While St. Paul says that we must “… become all things to all people” (1 Corinthians 9:19-23) and this is very important to consider when evangelising no matter what we are doing, we must also bear in mind this for ourselves:

“Beware of false prophets, who come to you in sheep’s clothing but inwardly are ravenous wolves. You will know them by their fruits. Are grapes gathered from thorns, or figs from thistles? So, every sound tree bears good fruit, but the bad tree bears evil fruit. A sound tree cannot bear evil fruit, nor can a bad tree bear good fruit. Every tree that does not bear good fruit is cut down and thrown into the fire. Thus you will know them by their fruits.” – Matthew 7:15-20

Yes, become all things to all people, but do not suppress Christ. The Lord will give you the opportunities to share His goodness; do not be afraid to take them no matter where you are or what you’re doing. I love being a nerd and doing nerdy things, but not nearly as much as I love Christ and my Catholic faith.