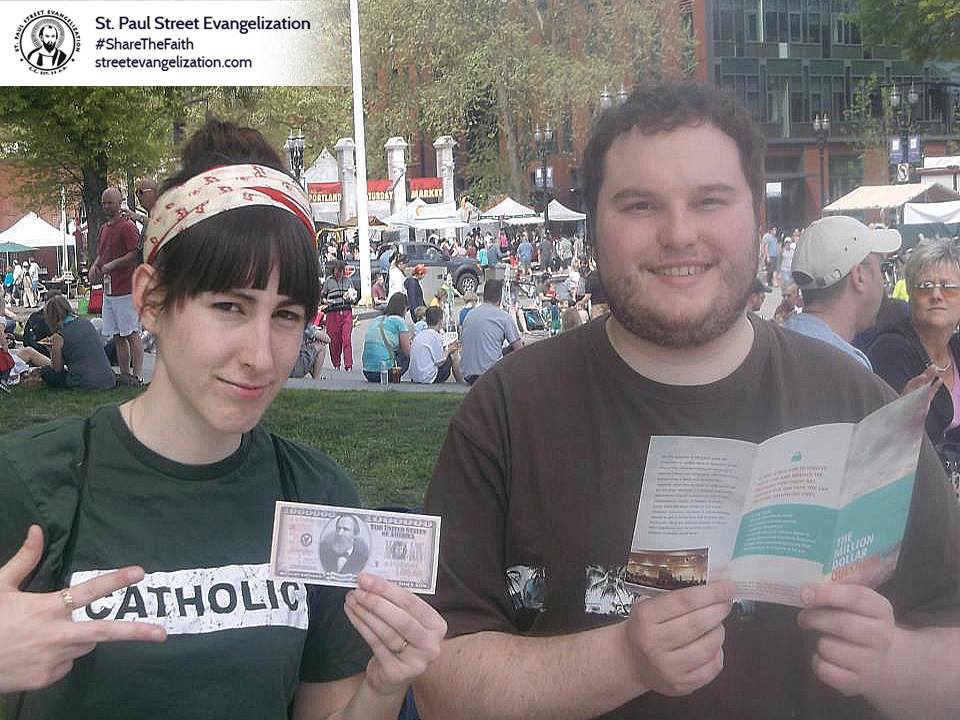 Some evangelical protestants like to pass out creative looking tracts to catch people’s attention and plant seeds about their understanding of the Gospel. While their efforts are commendable, they almost always contain teachings that do not capture the whole truth about how man is saved. Saint Paul said such people are “zealous for God, but their zeal is not based on accurate knowledge” (Rom 10:2). Since the Catholic Church was founded by Jesus and holds the fullness of truth, we have many sources for attaining “accurate knowledge” about the truths of the Gospel.

The pamphlets in this picture were given out by some Protestants walking by. The “million dollar question” the pamphlets ask is, “If you died tonight, do you know if you would go to Heaven?” The pamphlets state that all you must do is say a simple prayer and you’re saved and assured a spot in Heaven. While this message might sound appealing, it’s a serious error that many people fall for.

How would you respond to this widespread error which states being saved is as easy and effortless as just believing and saying a one time prayer?

From the Catechism of the Catholic Church (The sure norm for teaching the faith):

1987 The grace of the Holy Spirit has the power to justify us, that is, to cleanse us from our sins and to communicate to us “the righteousness of God through faith in Jesus Christ” and through Baptism:

But if we have died with Christ, we believe that we shall also live with him. For we know that Christ being raised from the dead will never die again; death no longer has dominion over him. The death he died he died to sin, once for all, but the life he lives he lives to God. So you also must consider yourselves as dead to sin and alive to God in Christ Jesus.

1988 Through the power of the Holy Spirit we take part in Christ’s Passion by dying to sin, and in his Resurrection by being born to a new life; we are members of his Body which is the Church, branches grafted onto the vine which is himself:

[God] gave himself to us through his Spirit. By the participation of the Spirit, we become communicants in the divine nature. . . . For this reason, those in whom the Spirit dwells are divinized.

1989 The first work of the grace of the Holy Spirit is conversion, effecting justification in accordance with Jesus’ proclamation at the beginning of the Gospel: “Repent, for the kingdom of heaven is at hand.” Moved by grace, man turns toward God and away from sin, thus accepting forgiveness and righteousness from on high. “Justification is not only the remission of sins, but also the sanctification and renewal of the interior man.

1990 Justification detaches man from sin which contradicts the love of God, and purifies his heart of sin. Justification follows upon God’s merciful initiative of offering forgiveness. It reconciles man with God. It frees from the enslavement to sin, and it heals.

1991 Justification is at the same time the acceptance of God’s righteousness through faith in Jesus Christ. Righteousness (or “justice”) here means the rectitude of divine love. With justification, faith, hope, and charity are poured into our hearts, and obedience to the divine will is granted us.

1992 Justification has been merited for us by the Passion of Christ who offered himself on the cross as a living victim, holy and pleasing to God, and whose blood has become the instrument of atonement for the sins of all men. Justification is conferred in Baptism, the sacrament of faith. It conforms us to the righteousness of God, who makes us inwardly just by the power of his mercy. Its purpose is the glory of God and of Christ, and the gift of eternal life:4

But now the righteousness of God has been manifested apart from law, although the law and the prophets bear witness to it, the righteousness of God through faith in Jesus Christ for all who believe. For there is no distinction: since all have sinned and fall short of the glory of God, they are justified by his grace as a gift, through the redemption which is in Christ Jesus, whom God put forward as an expiation by his blood, to be received by faith. This was to show God’s righteousness, because in his divine forbearance he had passed over former sins; it was to prove at the present time that he himself is righteous and that he justifies him who has faith in Jesus.

1993 Justification establishes cooperation between God’s grace and man’s freedom. On man’s part it is expressed by the assent of faith to the Word of God, which invites him to conversion, and in the cooperation of charity with the prompting of the Holy Spirit who precedes and preserves his assent:

When God touches man’s heart through the illumination of the Holy Spirit, man himself is not inactive while receiving that inspiration, since he could reject it; and yet, without God’s grace, he cannot by his own free will move himself toward justice in God’s sight.

1995 The Holy Spirit is the master of the interior life. By giving birth to the “inner man,” justification entails the sanctification of his whole being: