Take a look at the story below. As Catholics we all to often forget the power of prayer. I know, we pray all of the time, but how often to we offer to pray with someone else? People rarely turn down an offer of prayer. And the more you offer to pray with people the more you will become known as someone who is willing to listen and help. Our evangelists report over and over again how often people come back to Church because they prayed with someone. If we want to grow disciples, we need to make prayer ministry central to our relational ministry. We build relationships not only from one person to another, but we seek to bring that person into a relationship with Jesus Christ. 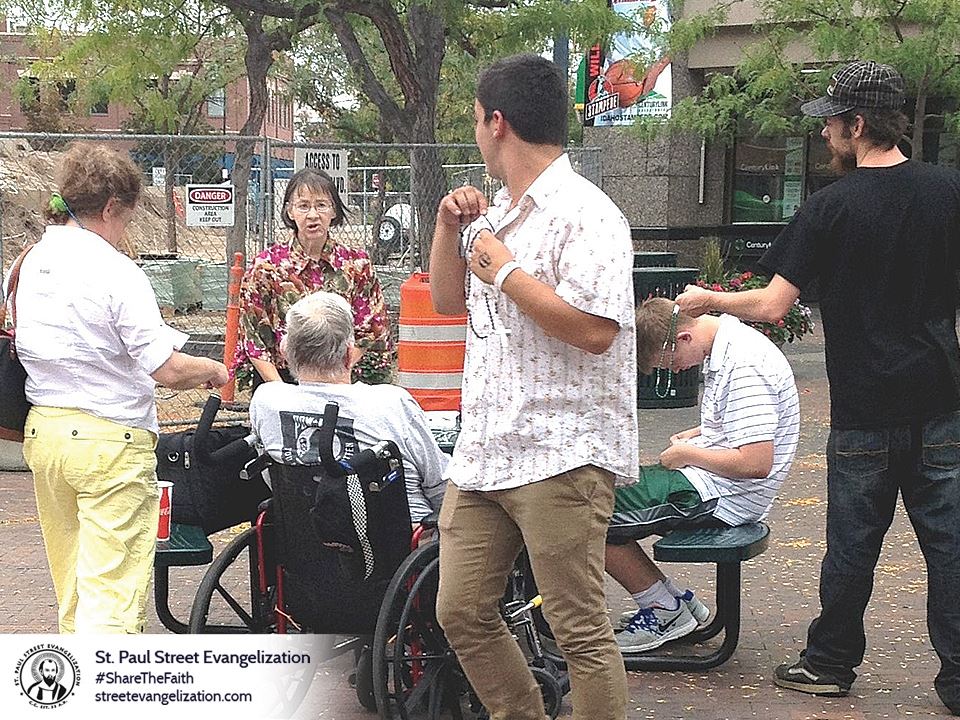 The age of healings ended, didn’t it?

A recent outing brought the Boise, ID, team a non-stop stream of people interested in hearing about the Rosary, the Catholic Faith, or how to re-connect with the Church after a long absence. Two of the people who stopped by were a woman and her elderly father in a wheelchair.

They stayed near the team’s table for quite a while, the evangelists reported. The man did not look at all well to them, and had a great deal of difficulty communicating with the woman. But he evidently wanted something displayed on the table. The woman offered him a couple of different colored Rosaries, but he didn’t seem interested. Then one of the evangelists offered a blessed Miraculous Medal. The man lifted his head slightly and gave a positive grunt.

A few minutes later, when there was a lull in the activity, the woman asked the evangelists if they would pray for her father. And they did. At the end of the prayer, the daughter, who was not Catholic, tried to make the Sign of the Cross with them. The evangelists then took a moment to teach her that powerful prayer.

Catholics begin and end every prayer by saying, “In the Name of the Father, and of the Son, and of the Holy Spirit” (cf. Mt 28:19) while tracing the Cross on themselves. There are layers and layers of rich meaning in the words, the gesture, and—of course—the Cross itself. Too much to cover in this short post, it’s worth every minute it would take you to look it up if you don’t already know. For one thing, it shows trust in Jesus when he promises, “And whatever you ask in my name, I will do, so that the Father may be glorified in the Son. If you ask anything of me in my name, I will do it” (John 14:13–14).

After the prayer, both evangelists noticed a marked alertness in the man. To God be the glory! “And by faith in His name, this man, whom you see and know, His name has made strong” (Acts 3:16). Please pray for continued healing for the father and that both father and daughter continue their journey all the way into the fullness of the Faith in the Catholic Church.