Too Young to be Baptized?

Beginning with prayer in the park, Team Enterprise, AL, set up supplies and prepared to talk with anyone not staying home to watch Saturday college football. One man they encountered brought along his English Mastiff.

The man had been baptized Catholic but was raised as a Baptist. He told the evangelists that he actually prefers attending Mass to other kinds of church services. The evangelists, in turn, explained to him how Jesus Christ is truly present in the Mass under the appearance of bread and wine (see John 6, CCC 1068). They also explained that Jesus Christ is not only the object of our thoughts and our symbols, but that He actually does things for us in His Sacraments. And what He does is, in a word, salvation. “Christian liturgy not only recalls the events that saved us but actualizes them, makes them present” (CCC 1104). Christ is not merely remembered, like some dead man who existed long ago, but He is encountered as He really is, “alive and kicking” like a stallion. 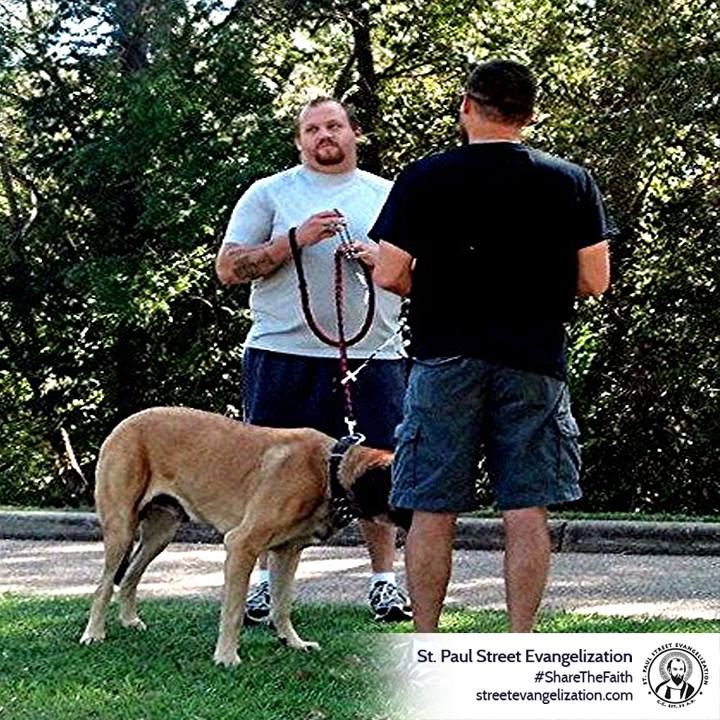 The man very much liked what the evangelists explained to him about why he felt an attraction for the Mass. However, he had an overriding objection about the Catholic Church herself. He spoke about his own Baptism and stated that he thinks people should have waited until he had made that decision on his own.

The evangelists in turn asked the man to think about how the Jewish law required that all male babies be circumcised when they were 8 days old (Gen 17:11–13) and how that was the only way that they could enter into the covenant with God (family relationship, with its accompanying blessings).

Evangelist Mikey Torres then asked the man, “Do you think the babies wanted to be circumcised?”

The Catholic Church has many reasons for infant Baptism, a tradition dating back to its beginning. There is also much other Scriptural support for infant Baptism. For example, whole “households” received baptism (cf. Acts 16:15, 33; 18:8, 1 Cor 1:16, CCC 1252).

Infant Baptism also honors the nature of God’s love: God loves us before we love Him; even our desire for Him is a gift from Him. Infant Baptism shows our faith in God’s initiative. “The sheer gratuitousness of the grace of salvation is particularly manifest in infant Baptism” (CCC 1250).

Infant Baptism shows the wideness of God’s grace. God withholds His love from no one. Intelligence is not a qualification, only openness. Who is more open than an infant is? There is no actual sin, no guilt, and no refusal (cf. Mt 18:3). Besides, Christ told His apostles to let the children come to Him (Mk 10:14–16).

Infant Baptism also fits with the fact that loving parents want to give their children the very best of everything. Nothing is better than God’s grace, and nothing is more necessary for a good life. Were they not to confer Baptism shortly after birth, “the Church and the parents would deny a child the priceless grace of becoming a child of God” (cf. Jn 1:12-18; 17:3, Rom 8:14-17, 2 Pet 1:3-4).

Evangelist Mikey Torres then reminded the man about each parent’s responsibility to instill the Faith in their children (see, e.g., Deut 11:18–19). God deals with us not only as individuals but also as families. Throughout Scripture, covenant (marriage) and kinship (family) are central (e.g., Is 2:3–5, Ps 7:8–8, Ps 9:8–9).

He also pointed out that Baptism is a Sacrament, instituted and commanded by Christ Himself (Mt 28:19–20). In Baptism, we are actually regenerated though water and Spirit (John 3:5, CCC1215) and enter into Christ (Rom 6:3) as a Christian.

Finally, since we simply cannot understand how God’s grace works, we cannot limit it.

The gentleman thanked the Enterprise, AL, team and was very happy to take literature. He also received directions to the team’s parish. Please join us in praying that God will direct the man back Home.