The Beauty of Catholic Evangelization 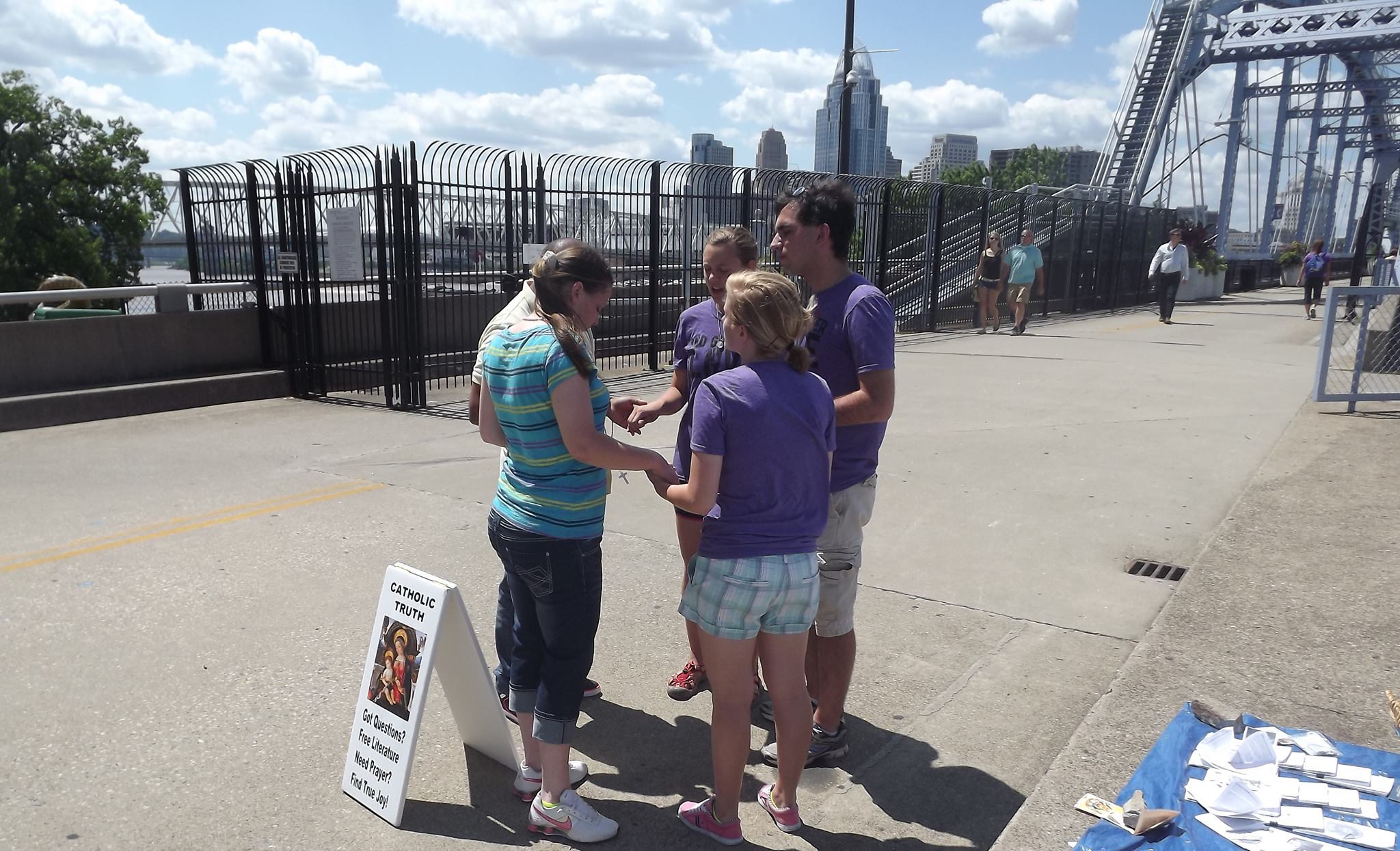 The past two years I have been honored to witness thousands of ordinary Catholics engaged in the extraordinary work of evangelization through St. Paul Street Evangelization. Through its small beginnings on a board walk in Portland, Oregon to an international apostolate of the Catholic Church it continues to maintain its “smallness”. Evangelization is done through the little way of Catholics sharing their faith every day by sharing their lives with others, be it in a doctors office, grocery store, street corner, or at church.

Miss no single opportunity of making some small sacrifice, here by a smiling look, there by a kindly word; always doing the smallest right and doing it all for love. St. Thérèse de Lisieux

In December 2014 my evangelization team was asked to be present at a Christian nativity at the state capitol in Michigan. Nearby a local satanic group had erected an inverted nativity which glorified “knowledge” as the greatest gift (a lie going all the back to the garden of Eden). It was the only time I had gone to evangelize with my team that I had hoped we would not see or speak to anyone – that the satanic display would not draw curiosity or controversy. Our team was there in case people did show up so we could answer questions and share the Gospel.

For the first hour our team was present near the Christian nativity there was very little activity. The couple of dozen people that walked by prayed at the Nativity and thanked us for being present. Only a few people showed interest in the satanic display and we did our best to dissuade them from any kind of unhealthy curiosity in it. A few of them had children with them and we were usually able to convince them not to visit.

Unfortunately a group of fundamentalist Christians holding large signs about judgment showed up, walking directly to the satanic display, they started to yell at the people who were there to keep an eye on the display. The controversy only blew up from there and a large crowd starting drawing close to see what was going on. The screaming continued even after our group left. The local priest who was with us, Fr. Steve, noted that instead of evangelizing anyone, the fundamentalist group had accomplished the opposite of their intended effect. They had intended to call down God’s judgment on the satanists and seek their conversion. Instead satan relished in the controversy that was created. I’ve seen this type of evangelization happen several times now, the latest when a group tried to convert Catholic students leaving the National Rally & Mass for Life in Washington DC. I’ve been on the receiving end at college campuses as well. It never works.

“Every person has the right to the Good News, and we should leave no stone unturned to announce it to them.” Cardinal Hyacinthe Thiandoum

Evangelization takes place through our charitable works – especially through the corporal and spiritual works of mercy, including on the street. Our evangelists try to listen and build relationships with the people they meet, as well as provide a bridge between the street and the charities of the church when they are unable to fulfill the charitable needs people have in their own team. They do not scream at or condemn anyone.

Many Christians mistakenly believe that Catholics are not Christians. I was a part of a baptist community for several years and was taught that Catholics believe they are working their way into heaven, worshiped Mary, sought after the saints intercession instead of asking Jesus for salvation, and did not know Jesus Christ as their savior. Little did I know that with a little searching, and an open heart to the Bible and God’s will, our family would be received into the Catholic Church on Easter Vigil of 2005. That did not negate the growth I experienced in my baptist church. There I fell in love with Jesus Christ and He came into my heart. They taught me how to read the Bible, and they taught me the value of a good potluck. By being open to the possibility that everything I was taught about the Catholic Church may not be true, I embarked on a long journey with Catholics who I had been trying to evangelize out of the church. Knowing that the Lord Jesus desires one faith (Ephesians 4:3-6) and founded one Church (1 Timothy 3:15) which He desired and prayed to be undivided (John 17:17) I was willing to challenge the claim of the Catholic Church that it is the one, universal, apostolic, visible church Jesus founded and modeled after the Davidic Kingdom (Matthew 16:18), a claim not made by any Protestant church. In that challenge I discovered that the Catholic Church is guided by the Spirit into all truth (John 16:13) and by testing the spirit of the Catholic Church found it to be true. 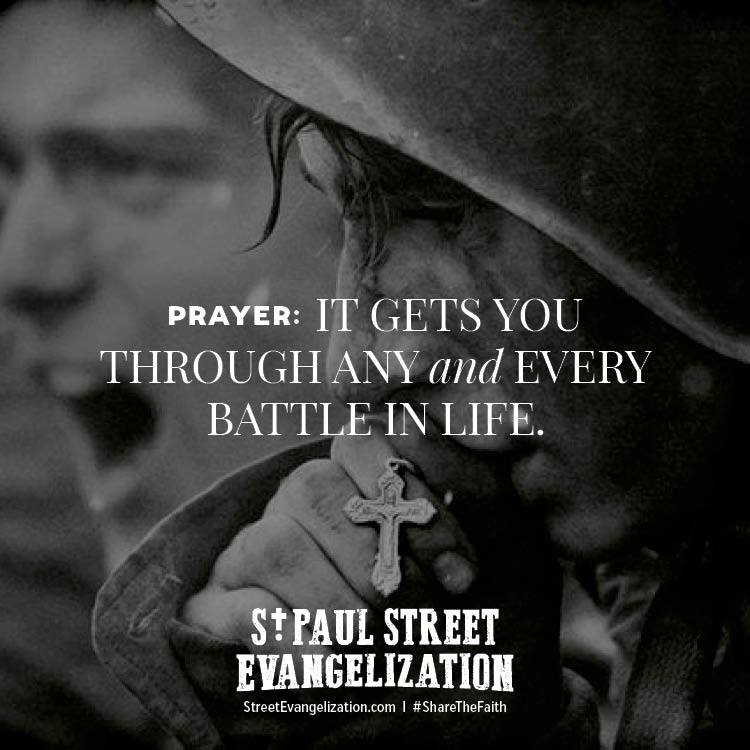 I was led into the Church through the quiet, persistent friendship, work, and prayers of those close to me who invested in me. There was no glamour in it, and at times my persistence in avoiding what I knew in my heart to be true was frustrating for the Catholics who were doing the evangelizing, but they persisted anyway. It was ultimately not apologetics that won me over (though the apologetics gave me intellectual permission to become Catholic) but the little works of ordinary Catholics who spoke about their faith to me and showed me what it looks like to live as a Catholic (and the peace, joy, happiness, and holiness that came with it, even through suffering). They knew that my conversion and entrance into the fullness of the faith was not their work, but the work of the Holy Spirit. They could only watch. When I became Catholic I did not reject my Protestant faith so much as fully embrace all of the graces God had for me. Along with the Bible, along with prayer, along with Christian community I gained the Eucharist (John 6:53), I gained the sacraments, I gained the intercession of the saints (Hebrews 12:1), and so much more. Evangelists need to be equally as persistent. Our work takes time.

That is the power in true Catholic evangelization. Every Catholic is called to it (Catechism of the Catholic Church, 905). Through St. Paul Street Evangelization our teams are able to build a bridge of trust from the public square to the local parish by their regular presence. Through their regular, quiet presence they become a fixture of the community, listening to those who want to speak, offering counsel, praying with those who need it, proclaiming the Gospel, sharing their testimony, and drawing people closer to Jesus Christ. Our evangelists have witnessed tears of sorrow and joy and built relationships with strangers that have led all the way to the baptismal font. That simple work of public presence has born many fruits that I am sure we will never know about. So, please join us and expect miracles because we get to watch them happen every day. Even if you don’t think you can start or join a street team (you can!) please become a member, pray for us, and support us so we can continue supporting our teams.

As Steve Ray said “Street evangelism is as old as the gospel itself. The Apostles of our Lord Jesus Christ were the first street preachers announcing the good news of salvation and the Church in the streets of the Roman Empire. This tradition was practiced by the great saints throughout history and is alive again with and spreading across the globe. The faithful Catholics who make up St. Paul Street Evangelization live up to their name. Support them, follow them, join them!”

Will you join us?