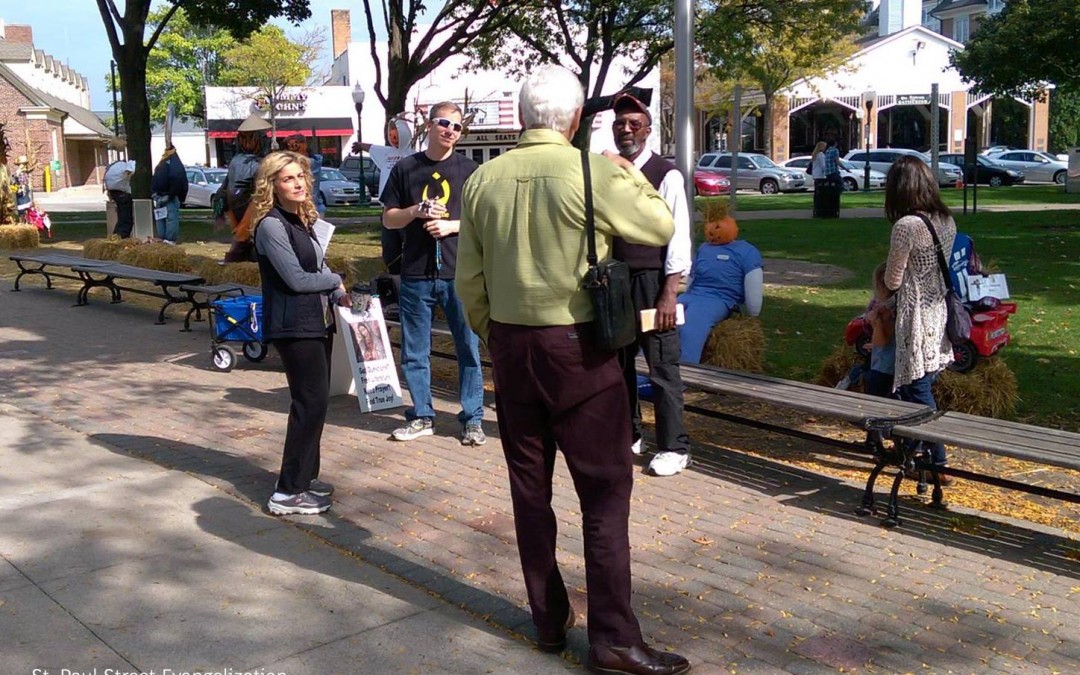 Plymouth, MI. Often, the encounters our evangelists have on the streets strengthen the conviction that we (the Church) have sadly failed to transmit the faith to recent generations. It always seems like they are meeting Catholics or former Catholics who are greatly ignorant of the faith. Many times, it is clear that something else has come in to fill in the “empty space”left by a lack of meaningful religious teaching. As we often hear it said, the second biggest “denomination” in the United States is fallen-away Catholics … The Detroit, Michigan team had an interesting encounter in Plymouth recently with a man who identified himself as a non-practicing Catholic. As they put it, he was “all over the place.” For over a half an hour, they talked to him about a lot of things; they said that he was “really into” matter, physics, new age, and other related topics. He also wanted “proof” for everything they told him.

Though it was a very positive, friendly conversation, they did not make a “revert” out of him. However, they were able to get him to turn his mind to consider what is true, good, and beautiful. He needed to leave, so they prevailed upon him to take some CDs for the road, though he would not take a rosary. He left thanking them for the conversation and for being out there on the street.

Please pray for this man, that the seeds the Detroit team planted will bear fruit in his heart and lead him back home to his Savior, Christ Jesus. And pray for us – for our whole apostolate and the evangelistic work we do in cities and towns all over the country, and even internationally. Join a team, start a team, support us financially. May Christ bless you abundantly!