Pendergrass, GA. Our evangelists don’t only evangelize on the streets. We’ve had teams set up at festivals, conferences, airports, parish events, homeless shelters, and more. Team leader Pablo of the Prince of Peace SPSE team in Atlanta recently sent us a report on his team’s first full day out as a parish ministry. They set up their evangelization table in a Flea Market. 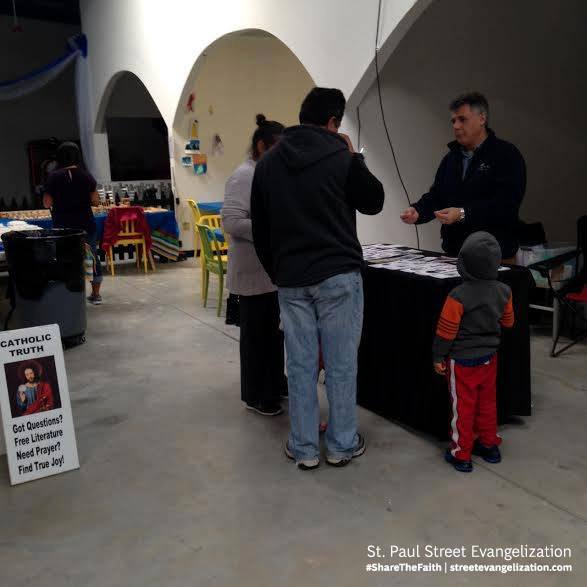 “We had a quite busy time at the Flea Market on Saturday. We were assigned a place at the end of the food court, and traffic was slow at first. However, Leo suggested we walk around the food court and other areas of the building. Doing this, we met a good number of people.”

One of these people was Maria, who works at one of the restaurants in the food court every weekend. She has an 8 year-old boy. Maria wanted to know about what she needed to do to get her boy baptized. The team is committed to helping her with this, including giving her some longer-term support. Maria accepted a rosary and was very happy to meet the team.
In the picture, we see Leo talking to a Salvadorian family. This family approached the table interested in rosaries for the whole family – parents and children. They go to St. Patrick’s Catholic Church in Norcross, GA.

The team also talked to a gentleman, Dave, who works at the Flea Market. He was involved at a parish in New York, and was even an altar boy. However, a series of events in his life caused him to distance himself from the Church. During what was a rather long talk, the team could sense that he really longs to come back home to the Church. They intend to keep in touch with Dave, and plan on getting to know him better, hoping to become instruments of God’s grace and love, so that he eventually finds his way back to full communion with the Church.

The team plans to continue to go to this flea market in the future and become a familiar face to some of the people who work and shop there, so that they might be more open to ask questions and continue their journey in the Catholic faith.