Prayer and Free Will

Phoenix, AZ. Does praying for someone disrespect their free will? That is what one person suggested to the Phoenix, North West team during one of their recent outings.

The man’s name was “Nick.” The team actually met him at the “First Friday Artwalk” on a previous occasion a couple of months earlier, and were now encountering him for the second time at the same event. The First Friday Artwalk draws a mixed crowd of, as the team reports, “young, old, hipster, teen, families, loners and musicians.”

Nick was baptized Catholic but now professes himself to be an atheist. The last time the team encountered him, he was urging the team to prove to him that God exists. When the evangelists offered to pray for him, he asked them not to do so; because that, he said, would be an assault on his free will.

The team did not honor his wishes – they prayed for him. Were they wrong to do so? Does praying for someone put some kind of unfair pressure upon their free will? 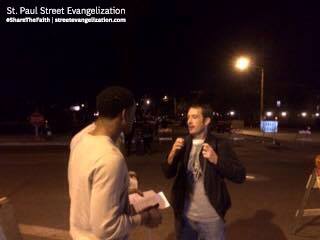 When the team met Nick again this time, evangelist Susan told him the truth: “My Mom and I have been praying for you ever since you visited us last time.” Nick looked stunned and asked, “Why would you do that?” She answered, “Because we love you and want you to know the joy we have through Christ.”

She told Nick that the prayer she and her mother had been praying for him was that God would prove His existence to him. In the course of explaining herself, Susan mentioned that she knows that Nick was a baptized Catholic – to which Nick stridently responded, “I am still a Catholic!”

But Nick still thought that his free will was being disrespected by all this prayer. Susan assured him that God respects his free will. It was probably clear to him at this point that Susan and her mother weren’t going to stop praying for him. Before he left, then, as if in revenge, Nick said that he would be praying for Susan and her mom as well.

So does praying for someone put unfair pressure on their free will? Absolutely not. By prayer, we enter into cooperation with God, who does not force himself upon us in the manner of a rapist, but strives by his grace to win our hearts, us as a young man strives to win the heart of the girl who has captured his affections.

The team says, “Who knows what will become of Nick? We hope and pray to see him again. … The Holy Spirit is in control. … To God Belongs All the Glory”

Praised be Jesus Christ! Thank you, Susan and team Phoenix NW, especially newcomers Fiona and Angelica!! And thank you, dear reader – Will you join our efforts to evangelize?