“That they may all be one”

Bloomington, IN. Each person on earth is created and redeemed by and for Jesus Christ. Furthermore, each person is meant, in Jesus, for the fullness of the life of grace. So when we go out to evangelize, we generally find out where a person is at, and then seek to help them take whatever next step would put them in greater contact with the mystery of Christ. For atheists, we try to help them acknowledge the existence of God. For non-Christians, we introduce them to Christ. For non-practicing Catholics, we exhort them to take their faith seriously. For practicing Catholics, we encourage them to grow in prayer, and in the practice of the corporal and spiritual works of mercy.

So far, we haven’t mentioned non-Catholic Christians. But they are no exception. We’re not ashamed to invite our separated brethren, especially Protestants, into full union with Christ’s Church. We wish to share all the great means of salvation and holiness which are found in the full unity of Christ’s one body, the Church he founded in his shed blood. 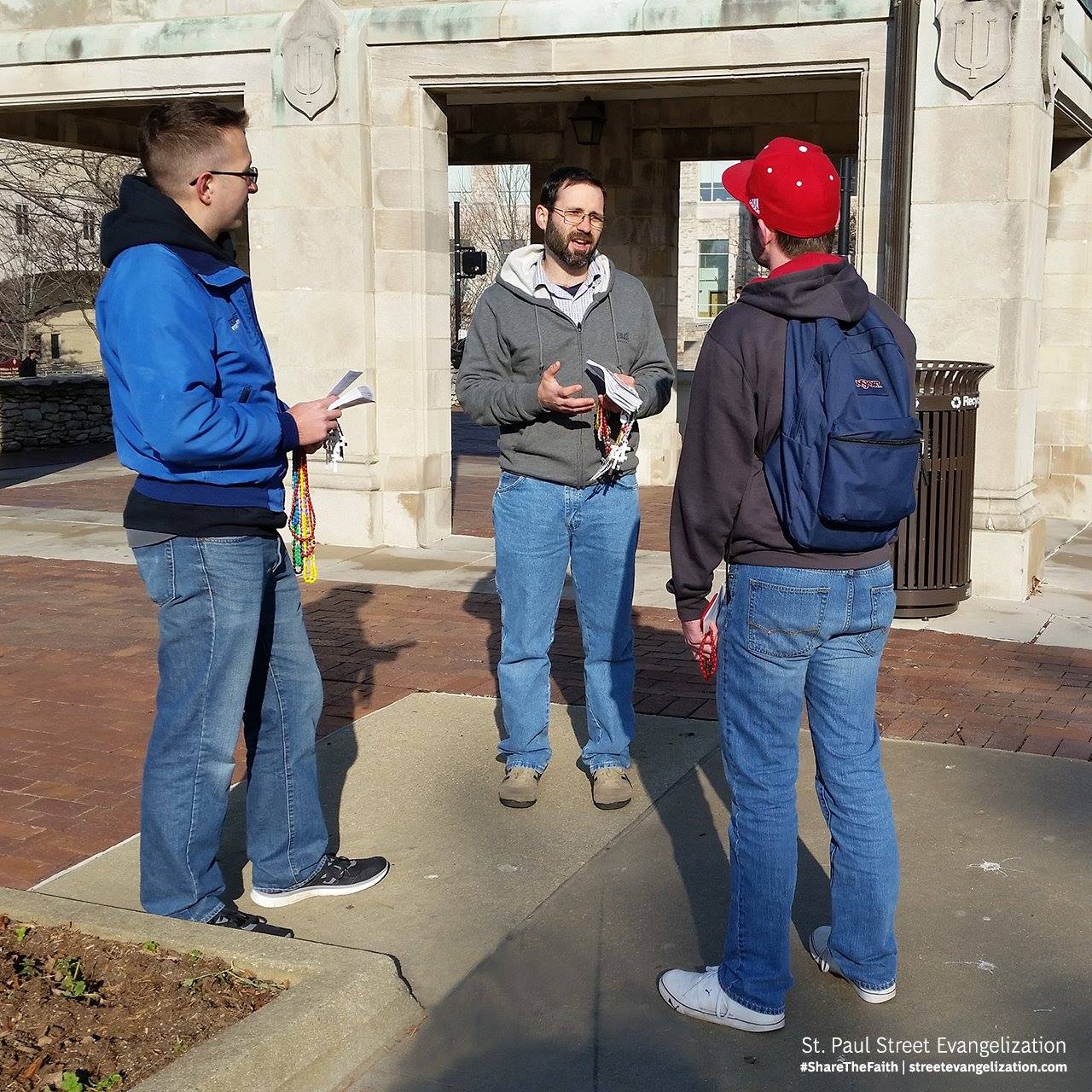 That is the way the encounter pictured here began. Joe and Mark shared with this Indiana University student and non-denominational Christian reasons to consider entering into full communion with the Catholic Church. But the student was not interested. So before the student had a chance to leave, Mark changed gears and began to speak to him about the ecumenical movement.

But what is the ecumenical movement? Parallel to the activity of seeking directly to bring our separated brethren into the unity of the Church, is the activity of ecumenism: cooperation, fellowship, dialogue, and common prayer, aimed at overcoming our divisions in a more gradual way, and on a larger scale. (Both kinds of activity, by the way, ought to include a certain aspect of mutuality, respect, and a willingness to learn as well as to teach.) Since the Second Vatican Council, the Pope and bishops have encouraged this movement properly understood, and have given guidelines for how Catholics can engage in it in acceptable ways. For example, in 1995 Pope Saint John Paul II wrote an encyclical letter, “Ut Unum Sint,” about this topic.

So Mark began by explaining to the student how many non-Christians are scandalized by the division among Christians, and how important it is to work for Christian unity. He then spoke briefly about the ecumenical movement – what it is, and some of what it has accomplished – and encouraged him to consider what he can do to promote reunion of all in one Church. The student was clearly more open to this idea.

Praised be Jesus Christ! That all might be one in Jesus, let’s all do the work of evangelization! Have you thought about joining one of our teams, or starting a team of your own? It’s not hard to do!