San Diego, CA. Let’s admit it, many people are simply afraid to evangelize. (You may even be one of them!) … Why are they afraid to evangelize? Primarily, it seems that they are worried that their efforts to share the faith with others will receive negative reactions. They fear that their words will be taken as an imposition; as pushy, as awkward, or as offensive. Most of the time, they (… including you?) need only to be encouraged: For where would the faith have spread, if not for the public preaching of the Apostles and their coworkers? How long would the faith have survived without the great missionary efforts, as well as the everyday witness, of the men and women of the first centuries of the Church? What would have happened if the “Great Commission” of Jesus Christ (cf. Matt 28:18-20) had not been obeyed?

And what will happen if our generation of Christians refuses to bear witness to the Christ of God, whose name is the only one given to man that he might call upon it and be saved? … For “how are men to call upon him in whom they have not believed? And how are they to believe in him of whom they have never heard? And how are they to hear without a preacher” (Rom 10:14)?

The alternative is no alternative at all. We must preach the Gospel; we must share the faith. No amount of fear should prevent us from fulfilling our call. 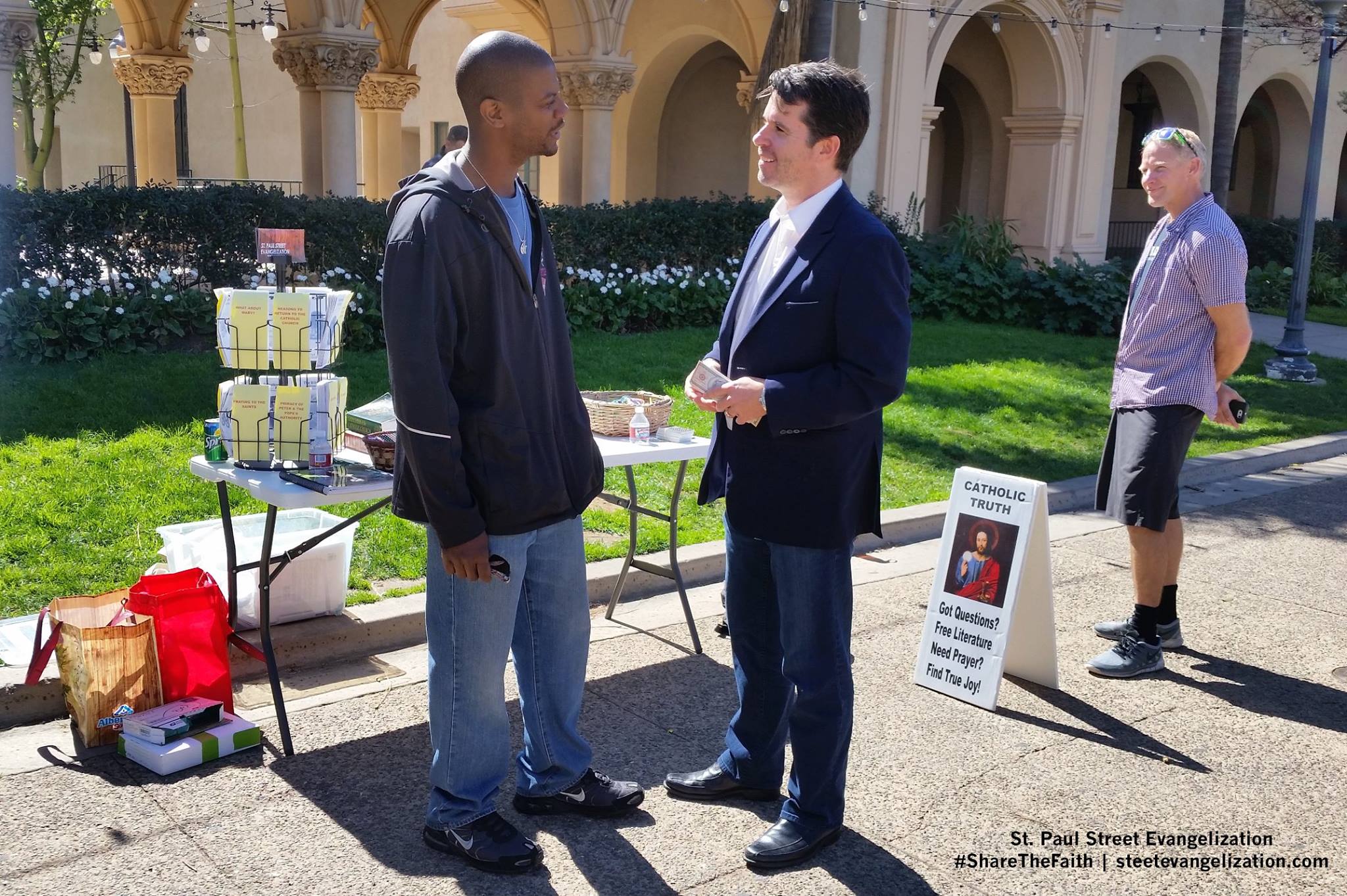 Recently, our national director Steve Dawson was in San Diego visiting the SPSE teams nearby, as well as the folks at Catholic Answers, to fulfill our call to evangelization in that city. In the picture, you see Patrick Coffin, of Catholic Answers, talking to a gentleman about the Catholic faith. During this outing Patrick, Steve, and others spoke many people. One of them was “Jose”: a fallen-away Catholic experiencing some personal troubles, and was feeling lost and confused. Steve talked to him for about 30 minutes and he committed to returning to the faith, getting to Confession, and to Holy Mass on Sundays. Steve and Patrick both spoke to a woman, also fallen away from the faith. By the end of the conversation, she too committed to go to confession and to take her faith more seriously. They also talked to an atheist, and gave him “one good reason” to believe in God’s existence. Again – by the end of the conversation, he said that he now believed in God.

How did Steve, Patrick, and the others manage to help these three people? Ultimately, of course, by the grace of God. But they had to obey God’s call to evangelize. Despite their fears, they had to just do it. When you think about it, there is no real alternative. … Evangelize. Just do it.
Praised be Jesus Christ!