Phoenix, AZ. Sometimes, evangelists need to be on their toes, ready to respond with tact to sensitive questions and other awkward situations. The Phoenix Northwest team set up recently in front of the downtown library to evangelize amongst a mixture of book lovers and homeless people, and Susan was called upon to respond prudently in a situation that could have ended with a frightened child and an angry mother! 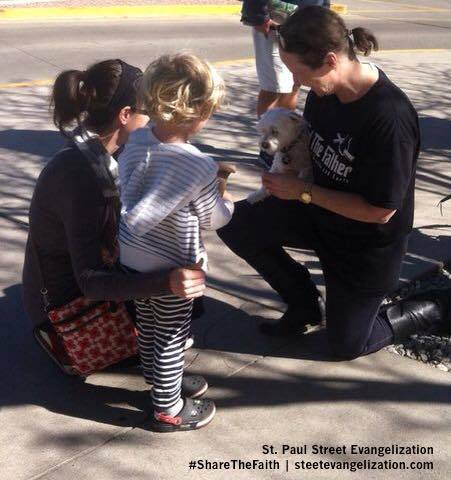 Pictured here is Susan, who was approached by this young mother and her son. Inside the library, the mom asked her little boy to think of a good question for the evangelists. On exiting, she then asked Susan to field the question, which she did not pre-screen. The child asked, “How did Jesus die?” Immediately, at hearing the question, his mother looked alarmed. Before rising from the dead, as we know, Jesus died a horrible, gruesome death: very arguably not a matter to discuss with small children. Susan wisely answered that Jesus did not die until He was a grown up, that he did not die as a child. She further explained that Jesus was told by God that He would be on earth for a time, and then would get to go home to be with God His Father. This seemed to satisfy the youngster, and reassure his mother.

Evangelists Erin and Sharon had opportunities to talk to several former Catholics. One, Roxanna, took a free statue of Jesus and Mary, the SPSE pamphlets “Reasons to Return” and “Confession,” and a rosary. She even seemed open to going to Confession and Mass and was given information on a nearby church.

Another man, Anthony, said he was raised Catholic but is now non-denominational. He mentioned he does not agree with “praying to the saints,” and that he goes to only Jesus with his prayers. A short conversation about that ensued, and he was cordial, but seemed hurried and closed off to talking much more. He did let his children have rosaries and said he respects Catholics as many in his family remain in the Church. Please pray for Anthony and his family that they might all one day be united in the Church.

Praised be Jesus Christ! Does street evangelization sound like something you may be called to do? Join us!