“I just can’t believe how lucky I am … This ministry is such a blessing!”

Berkeley, CA. Recently the Berkeley team had four evangelists at El Cerrito Plaza. They worked at the plaza because of the threat of rain and because a wide open space could accommodate that many evangelists. Here is the account of one of the evangelists, Dave:

“I met with a woman who said she was Baptist and said her daughter had become Catholic. She expressed that she was so grateful that her daughter was involved in some form of Christianity. She took a rosary and a rosary manual. I later met her husband – not knowing they were together till she came by to fetch him. He started the conversation praising Jesus with a warm smile, Christ in his eyes, and a handshake. He took a rosary as well.” 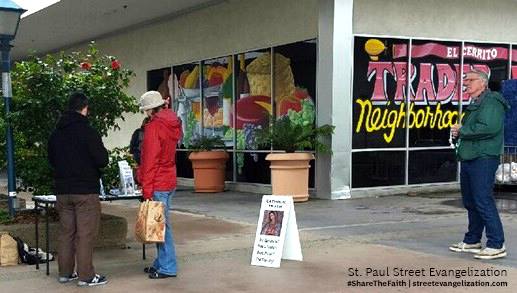 “A young lady while passing by mentioned that she was a ‘recovering Catholic,’ a label that I have some issues with. … I had Paul standing right next to me, so when she made her comment I immediately turned to Paul and said, ‘I hear that a lot: what exactly is a “recovering Catholic?”’ She immediately stopped, and responded by explaining that she had been all the way through Catholic School, and had an uncle who was a priest that she had had extensive discussions. Her conclusion: ‘It’s just not for me.’ My response was, ‘Do you consider yourself an open minded person?’ She answered yes immediately. At this point I gave her a “Good News” and “Why be Catholic” pamphlets. I hope she reads something in there that can spark her mind or heart. Please pray for her.”

“Finally, I met a woman who accepted a Rosary and explained how she used to go to Mass but does not go any more. I asked her what she missed about it. She looked up as if gazing at a stained glass window and said, ‘The beauty.’ I just nodded with a big ‘Hmm … Would you mind if I gave you something to read?’ She said she didn’t mind, so I gave her a “Reasons to Return” pamphlet and a beautiful prayer card with a picture of Jesus knocking on the door. I just can’t believe how lucky I am to be able to be in the position to do this for people. This ministry is such a blessing.”

Praised be Jesus Christ! Also, thank you Dave for your faithful service to Our Lord!

Dave is right. The evangelizer is “lucky” to be given the grace of sharing the Good News. Evangelization is a great blessing. Indeed, as the Scriptures say, “Blessed are the feet of those who bring good news!”