“I WILL DRAW EVERYONE TO MYSELF”

The Fifth Sunday of Lent marks a point of acceleration towards Calvary, towards the saving death of Jesus Christ on the Cross for us. Next Sunday we will celebrate what the Church calls “Palm Sunday of the Lord’s Passion.” I don’t know about you, but for me one of the most curious references Our Lord makes to His approaching crucifixion occurs in John 12:32, when Jesus says, “And when I am lifted up from the earth, I will draw everyone to myself.”

The question the text raises for me is this one: What can Jesus mean by saying that when He is raised up on the Cross He “will draw everyone” to Himself, when it seems so obvious that not everyone has drawn close to Him? When many even appear to spend their lives running away from Him?

In order to answer this question, we need to think a little bit about God’s grace. I’m sorry to say that I hear far more Catholics talk about “karma” these days than grace. It’s become kind of a trendy word, but it’s really an unfortunate substitution in our vocabulary, since “karma” has absolutely no power to save us, and grace is something we absolutely need if we want to be saved, to avoid hell and to go to heaven.

The Catechism of the Catholic Church defines grace in the following way:

1996. Our justification comes from the grace of God. Grace is favor, the free and undeserved help that God gives us to respond to his call to become children of God, adoptive sons, partakers of the divine nature and of eternal life.

1997. Grace is a participation in the life of God. It introduces us into the intimacy of Trinitarian life: by Baptism the Christian participates in the grace of Christ, the Head of his Body. As an “adopted son” he can henceforth call God “Father,” in union with the only Son. He receives the life of the Spirit who breathes charity into him and who forms the Church.

1998. This vocation to eternal life is supernatural. It depends entirely on God’s gratuitous initiative, for he alone can reveal and give himself. It surpasses the power of human intellect and will, as that of every other creature.

1999. The grace of Christ is the gratuitous gift that God makes to us of his own life, infused by the Holy Spirit into our soul to heal it of sin and to sanctify it. It is the sanctifying or deifying grace received in Baptism. It is in us the source of the work of sanctification

Grace is not “karma”, it’s not “the Force” from Star Wars, and it’s not just a feeling. Grace is the gift of God’s life, freely given, so that we might become holy as He is holy and live with Him forever. Bringing this back to our question about the text I referenced from John’s Gospel, we need to see that when Jesus is “lifted up” on the Cross and dies for us, there is what we might call a supernova of grace, grace radiating out through the whole world for our salvation. And when we think about what the crucifixion of Jesus really is—the Son of God choosing to die for us out of love—how could the effects of such an act not be that dramatic, that powerful, that explosive?

Still, we have the problem of those who do not seem to be drawn to Jesus by this explosion of God’s grace in the world. Here I think there are at least three ways we can understand what Jesus’ meaning is when He says that He “will draw everyone” to Himself: 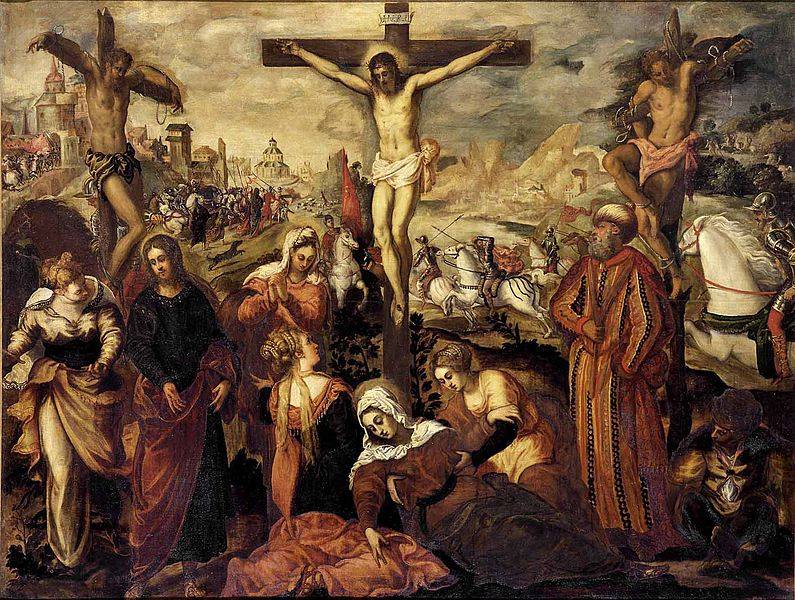 First, I think that one legitimate way we can read this Scripture text is to say that Jesus draws all the peoples of the world to Himself in His death on the Cross. Christmas seems like it was a thousand years ago now that we’re moving into spring, but it was really less than three months ago. At Christmas, we see this theme developed even at the very beginning of Jesus’ life. The announcement of the angels of “peace to people of good will”, the visit of the Magi from the East, and the prophesy of Simeon that the Christ Child would be a “light for revelation to the Gentiles”, all speak to Jesus’ universal mission of salvation.

The universality of Jesus’ lordship and mission becomes clearer throughout the New Testament. And in fact the Gospel has spread to all the nations of the world. There are people everywhere who by God’s grace have been drawn to the crucified and risen Lord Jesus. It’s one of the most remarkable things about the Catholic Church, that you can go anywhere in the world and find people who share our faith, who worship at Mass every Sunday, and receive the same Bread of Life with the same hope for heaven, no matter how different the circumstances of their lives might be from ours.

Second, in the way I phrased the question earlier, I made a distinction between two ways of using the verb “to draw”. Jesus speaks of drawing all people to Himself, and I asked why it’s the case that “not everyone has drawn close to Him”. So there is, on the one hand, Jesus offering the gift of grace to all, drawing all people to Himself, and, on the other hand, the element of human free will. To use another Star Wars analogy, grace does not work like a “tractor-beam”, which gets you into its grip so that there is no escape from being pulled towards whoever is trying to catch you. No, grace is a freely given gift that needs to be freely accepted. As Jesus draws us, we must draw near to Him.

Third, we need to remember that we don’t know how the lives of other people will end. G.K. Chesterton once wrote, in a quote featured in the novel Brideshead Revisited, about the way in which the Lord can draw people to Himself even when it seems that for most of their lives they have run away from Him: “I caught him, with an unseen hook and an invisible line which is long enough to let him wander to the ends of the world, and still to bring him back with a twitch upon the thread.”

There is a deep mystery about the way God engages each individual person. We don’t know what kind of drama might unfold in the last moments of any person’s life, what final gift of grace God might pour into his or her soul, what last chance there might be before death to share in the death of Jesus.

At every Mass, Jesus is “lifted up” on our altars. All the power of His dying and rising for us is presented to us, and He does all He can, short of forcing us, to draw us to Himself. May our hearts draw close to Him, especially as Holy Week quickly approaches. And each time we say “amen” at the end of the Eucharistic Prayer and when we receive Holy Communion, may it signal our desire to share in His Cross and His Resurrection.