“He was Muslim and was curious about the rosary” 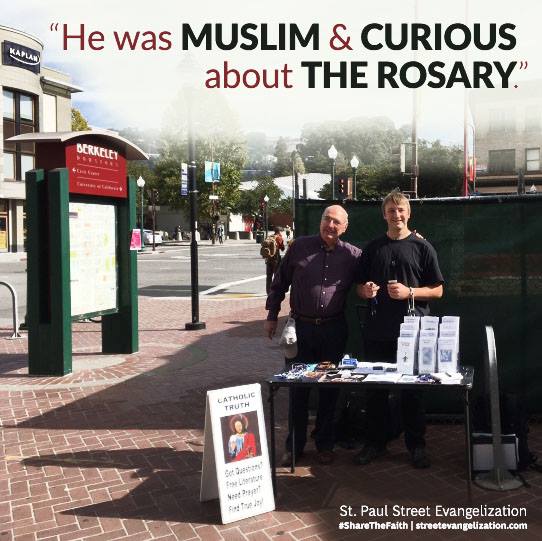 Berkeley, California. We had a four man crew working in Downtown Berkeley yesterday, Eddie, Chuck, Rodney and Dave. Normally, when we work downtown on Shattuck Avenue, it is at the plaza outside the Berkeley BART station. Because we were now directly outside the BART exit, we would get these waves of people exiting the station after getting off the underground train. We probably gave out 50 Rosaries. They were moving like hot cakes. We also collected a lot of prayer intentions.

I saw a group of young ladies who were all dressed to have a good time somewhere. They stood in a circle outside the entrance to the BART station chatting and joking loudly among themselves. I walked up and asked if any one of them would like a rosary. Most of the group initially acted like they were politely going to say no, when the most outspoken one said, “I want a pink one.” I immediately dashed to the table and grabbed a couple of pink rosaries. Then each young lady chose the color they wanted. I then gave them “The Rosary Album” cards so they could learn about it. They accepted them enthusiastically and expressed gratitude.

I saw this tall, young man with who must have been six foot four. He had a full beard and appeared to be of Persian decent. He was leaning up against a pillar as if he was waiting to meet someone. I approached him and asked if he would like a rosary. He informed me that he was Muslim and was curious about the rosary. I told him it was a meditation on the life of Christ through the eyes of his mother and about how each bead had its own prayer. I talked about how each decade represented a new mystery and how fruitful I had found it to meditate on these mysteries. He was very intrigued and said Muslims have something similar. I asked him, when during his traditional prayers, does he feel closest to God. He really lit up talked about meditating on the “prophet” Mohamed and the prophet Jesus. Now I was not going to debate with him about Christ since Christians believe Christ to be priest, prophet and king. I brought him over to the table to give him the rosary brochure. At this point his friend showed up. He introduced me. I kept talking about the mysteries and mentioned how God’s understanding is so far above ours. His friend agreed with me by nodding and tapping his fist on his breast, as the two turned and headed off.

Are you curious to see what its like to do Street Evangelizing but are a little scared? One non-threatening way to see for your self is to come along with us on an outing with the intent of observing and praying for us and those we meet. You might be moved by the Spirit to join us in approaching people OR you may find that praying for us while observing is something you are called to as well. Either way, you are evangelizing.