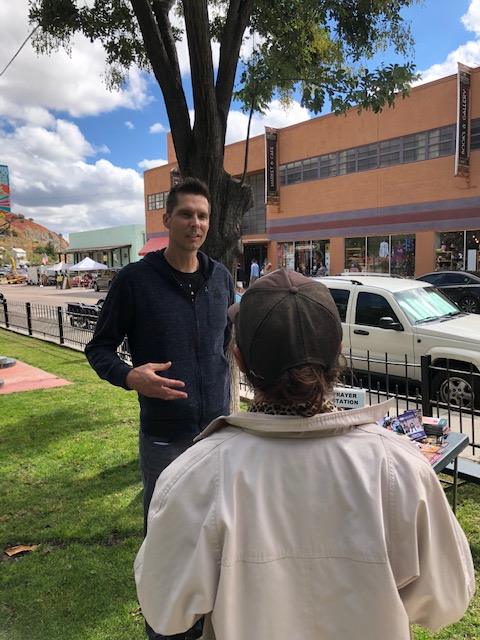 Bisbee, Arizona. “So much must the Protestant grant, that if such a system of doctrine as he would now introduce ever existed in early times, it has been clean swept away as if by a deluge, suddenly, silently, and without memorial.” These are the words of the late John Henry Cardinal Newman. As a convert, Newman knew that the early Church fathers held a key to the insight of what makes the Church Catholic. This is because the Catholic Church has maintained that continuity with the early Church, the roots of which can be traced back to Christ himself. “To be deep in history is to cease to be Protestant,” he famously stated.

This report comes from evangelist Ed of the Sierra Vista, Arizona SPSE team:

“Ed and Robert went to Bisbee AZ to the park by the Museum to Evangelize.

That day was a busy day for Bisbee as they had their 1000 step climb for thousands from Arizona and beyond. Ed and Robert handed out about 100 Rosaries and 50 Miraculous Medals and 75 cards with the 27 talks on them.

Ed and Robert both spoke with Merry who was Catholic but had not been to church in awhile. We spoke to her about why she needed to go to Church, and how from Scripture we hear in Acts 20/7 that they gathered together on the first day of the week to Break Bread. She decided after listening to us, to go to Mass on Sunday – Robert told her he would be singing in the choir at the 9:30 AM Mass. Merry said she would meet him there.

Dave came by and said he was a Christian. But he did not believe in everything that the Bible said, nor what any church said. Ed explained to Dave that Jesus lived for 33 years and the last three years he preached the Gospel to His disciples. He told them after He rose from the dead to preach the Gospel to the entire world then. But not everything that Jesus did is in the Bible because the Bible tells us so in John’s Gospel – the last sentence – that is everything Jesus did was put in the books of the world, the books of the world could not contain it. Dave agreed that not everything is in the Bible.

Ed went on to tell Dave that after Pentecost, the Apostles went out to the world. And they had men who lived with them and wrote down everything the Apostles preached, because they KNEW it came from Jesus. Ed told Dave that it was wonderful to read what these men wrote – men named Ignatius of Antioch,, Clement of Rome, Polycarp and others because when you read it, it helps you understand the Bible much better. Reading their writings proves a few things – such as what the Church is called – “Catholic” according to Ignatius of Antioch, that there is the Real Presence of Christ in the Eucharist, that there was baptism of infants, that you confess your sins to a ministerial priest, and the list goes on Everything we do today can be found in that first century. Dave said he would think about what Ed told him.”

Praised be Jesus Christ! The early church fathers believed in the Real Presence, Confession, the necessity of baptism for salvation, the role of Mary, and many other things that we still profess today as Catholics. Maintaining that tradition is important! The “depositum fidei” (deposit of faith), the body of saving truth entrusted by Christ to the Apostles and handed on by them to be preserved and proclaimed, must be carefully preserved and protected, because by it we learn what it means to be saved! It is a pearl of great price, that we too must pass on to others. Join us!