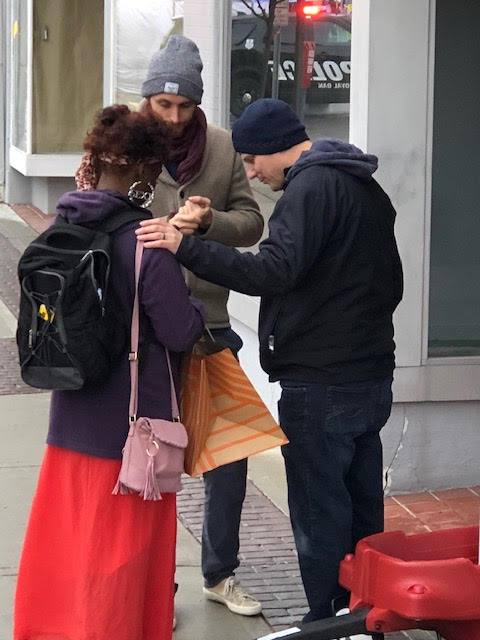 Royal Oak, Michigan. America is a religious country. The United States was founded on religious principles and many Americans have roots in the Judeo-Christian tradition. This is not always the case in many parts of the world, such as Europe, where religious practice is the minority. We tend to assume here in America that most people hold a belief in God, even if it is general deism. But as we will see from this report, that is not always the case everywhere!

“We evangelized a woman we met and gave her a Miraculous Medal, and I also felt inspired to give her my personal rosary, which she was stunned by. It turns out she was Catholic, and I asked her if she needed any prayers for anything. Her husband, who she was civilly married to, was living out of the house as if he was a single man. We started praying for her, and I felt inspired to ask God to enlighten her as to what she was supposed to do about this situation. I could see understanding come over her face. She said that God told her to leave the person, since he was abusive. She was crying and crying, and we prayed for her.

We talked to a security guard, who was looking for a church. I asked him, “Can I give you one good reason why I’m Catholic?” We told him about authority and infallibility, how the denominational splits were never Jesus’ intention. He was very interested, we gave him some audio talks and we exchanged numbers and will be going to lunch in a week.

A third person we talked to, whose name was Monique, was suffering from migraines. We offered to pray for her, and the migraines went away.

Dr. Mary Healy, who was accompanying us, had brought out some people from France who did street evangelization over there. In France, only about 2% of the population believes in God or has religious faith. So, they were very surprised when here in America, you would ask someone “do you believe in God?” or “do you go to church?” and they would say, “Yes!” So, they didn’t have to spend as much time leading people to a place where they simply believed in God. They were amazed!”

Praised be Jesus Christ! Part of evangelizing is learning where people are coming from, their background and exposure to faith, and responding according to that. If someone has no belief in God, we start there. If they are a non-practicing Christian, we meet them at that level. If they are a fallen-away Catholic, we encourage them to come home to the Church. We meet people where they are–if they are in need of healing, we pray for their healing by the Holy Spirit. If it is apologetic information they are looking for, we provide it. If it’s simply to ask questions, we respond. Thank you Lord for sending us your people to minister to! Join us!