“The Brother of the Lord” 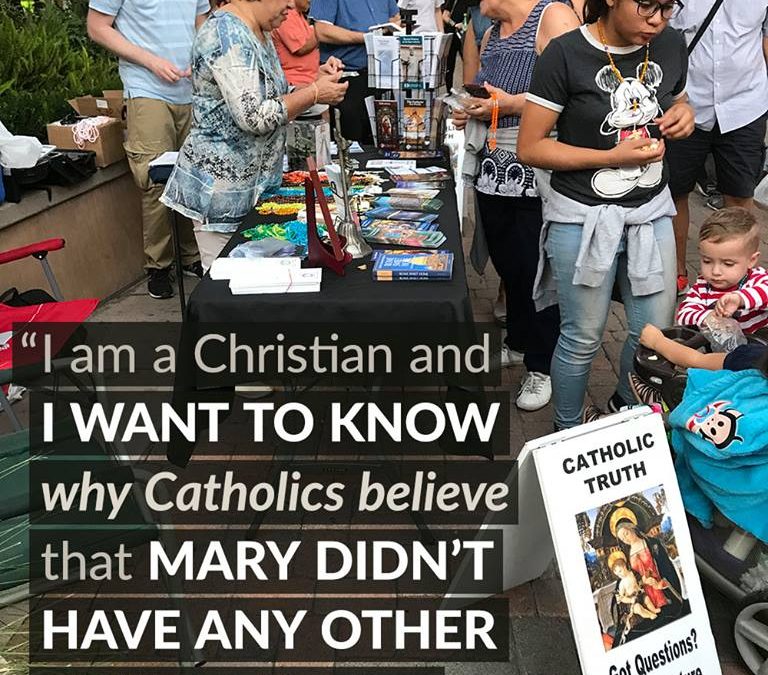 Riverside, CA. This story comes from Art: While at the Festival of Lights Friday night, a man and woman approached our table. The woman was looking through our brochures and I asked her if there was a topic she is interested in learning about. She said, “Yes: Mary. I am a Christian and I want to know why Catholics believe that Mary didn’t have any other children when the bible says she did.”

I mentioned to her that she must have in mind Matthew 13:55-56 where it mentions James, Joseph, Simon and Judas as “brothers” of Jesus. She said “yes.” I pointed out to her that is is by no means clear, from the bible alone, that Mary definitely had other children.

I started out by observing that if you look throughout the New Testament, you will never find a place that says these men are “children of Mary.”

Next, I observed that best explanation is that they were cousins of some kind. I pointed out that in the language they spoke, there wasn’t a word for cousin but rather “brother” was used in reference to “kin.” An example was Abraham and Lot. The King James Bible says that Abraham and Lot were “brothers” (Gen 13:8 and Gen 14:14-16). I pointed out to her that if you back up to Gen 11:26-27, it says that “Terah was the father of Abram and Haran” and Haran is said to be the father of Lot. I asked what relationship was Abraham and Lot? The gentleman said, “They were cousins.” I told him “no they were uncle and nephew, but the bible calls them brothers.”

I then went back to Matthew to explain to her that at least two of the four men mentioned are not Jesus brothers. If you look at the foot of the cross you will find something very interesting. In Matthew 27:55-56 it says, “There were also many women there, looking on from afar, who had followed Jesus from Galilee, ministering to him; among whom were Mary Magdalene, and Mary the mother of James and Joseph, and the mother of the sons of Zebedee.”

So, I pointed out that at the cross, there is a woman named Mary who has two sons (James and Joseph) who are said to be brothers of Jesus. “Who was this Mary”? I asked.

If we look at St. Johns version of the same event, John tells us who she is: “Standing by the cross of Jesus were his mother, and his mother’s sister, Mary the wife of Clopas, and Mary Magdalene” (John 19:25).

I then pointed out what St. Paul wrote about the “brother of Jesus” in Galatians 1:18-19. St. Paul tells us he went up to Jerusalem and “I saw none of the other apostles except James the Lord’s brother.” I asked her, “Would you say this was Jesus brother?” She didn’t answer so I pointed out, “This ‘Lord’s brother’ is also said to be an apostle, correct?” She said yes. I mentioned to her that if you look at Matthew 10:2-4, it gives us a list of the apostles and there is only two that are named James, one has a father named Zebedee, and the other James father is Alphaeus, neither of them has a dad named Joseph. With that, I could see in her face that it had clicked. I told her “I would like to give you this book ‘Why We’re Catholic’ – would you like to read it?” She said yes. I told her that many people have a misunderstanding about what the Catholic Church teaches, and that this book will help. She said thank you and went on their way.