Our Car Wouldn’t Start, So … 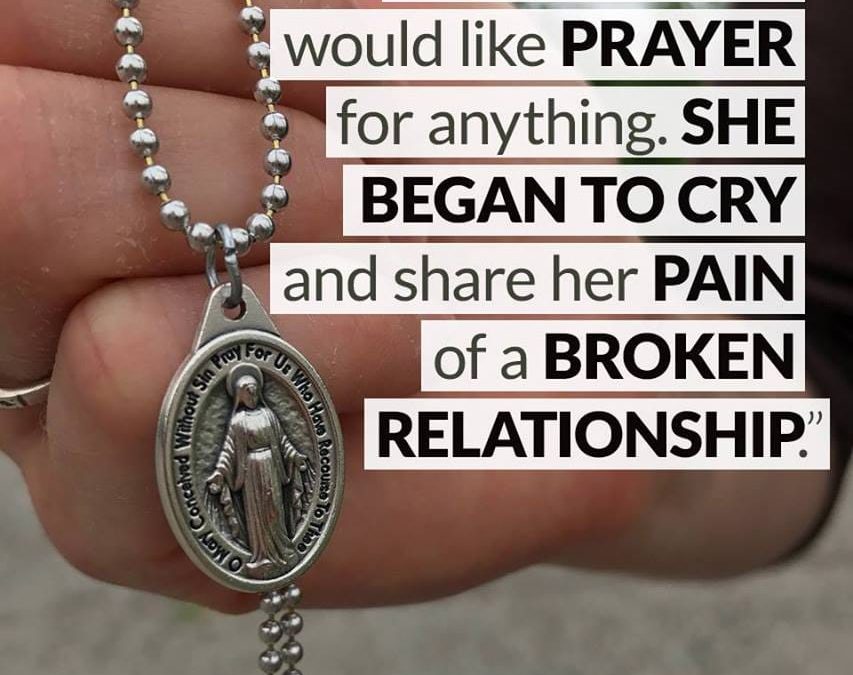 “Hometown,” IL. . For those who make themselves available to God, God periodically gives them special opportunities to do good to others. This recently happened for Pamela, who sent us this story:

Dave and I were in my Illinois hometown picking up some groceries Sunday afternoon at a local store. We parked next to a car where a woman and young girl were sitting. I didn’t think much of it until we came out after a good half an hour and they were still sitting there. Dave turned the car key and the car wouldn’t start. The lady and the girl got out for a bit and returned, and we were still sitting in the parking lot. I kept thinking that perhaps I should go talk to lady, but it is always hard for me to just strike up a random conversation. Since neither of our cars were leaving our spots, I gathered up a couple of miraculous medals and chains and went over to talk to them. I introduced myself and asked their names and offered them miraculous medals. I asked the mother if she would like prayer for anything. She began to cry and share her pain of a broken relationship with her boyfriend of three years. There were so many issues that needed to be addressed, but the best I could do is share the story of the miraculous medal, that Jesus and Mary loves and cares for them, and they would take special care of her if asked. I was also able to pray with her. Though her teenage daughter did not want a medal, the woman did and was appreciative of the offer. I told her I was from Indiana and probably wouldn’t see her again, but as we parted, she seemed a little happier and sent me off with wishes for a safe holiday. When we returned that evening to try getting our car started, it not only started, but we haven’t had any more problems with it since then. No coincidence: I just think Our Lord wanted this woman and her daughter to know He was thinking of them.