“Getting Creative in Evangelization” 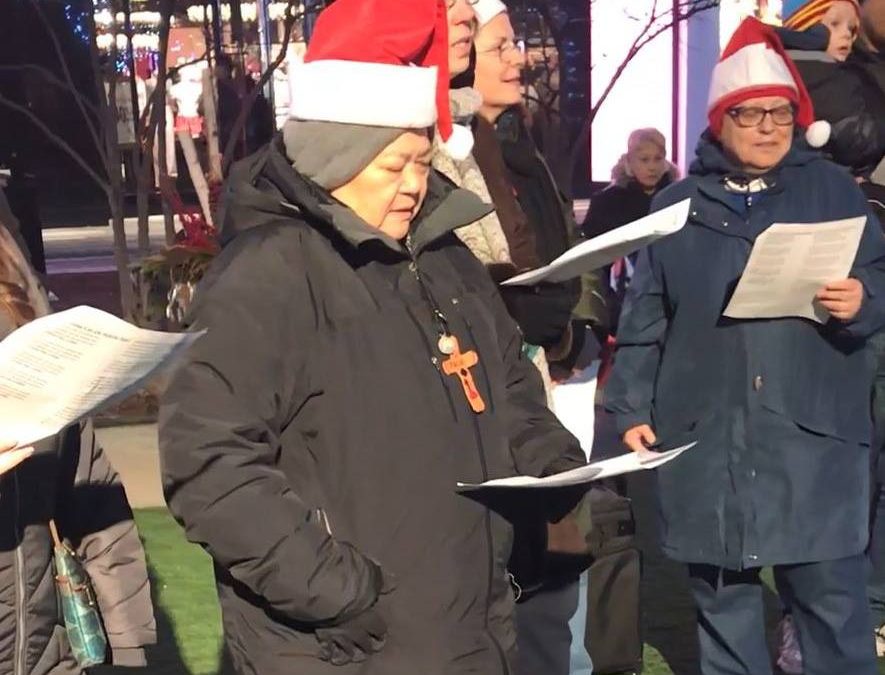 Joliet, Illinois. Evangelism is not an exact science. It takes prayer, intuition, adaptability. It also provides great opportunities to get creative and adapt to situations on the fly and meet people where they are. The Holy Spirit is always right there when our hearts are centered on the right things, to make a way for us!

This report comes to us from evangelist Nick of the Joliet, Illinois SPSE team:

“I wanted to take the opportunity to recap our most recent outing from December 22nd, just before Christmas. An awesome idea came from on of our Station Leaders, Chris. He’ll tell you that all the credit goes to our Lord Jesus (which, yes, ultimately it does go to Him!), but without Chris’ action and organization, the event would not have been possible.

If you’re unfamiliar with a flash mob, what it consists of is a group of people coming together in a public place, and then surprising all the people there with something unexpected. In our case, we descended upon one of the biggest malls in the Chicago suburbs, in Oak Brook, and started singing Christmas carols for the glory of our Lord Jesus. However, there was one snag we hit.

Apparently, security was made aware of our plans, and even though we were outside, we were still on what was considered private property. Originally, they were not going to allow us to pass out any literature or sacramentals, nor were they going to let us sing. After some negotiation, we were still unable to send out our prayer teams with resources for the public, but we were allowed to sing about half of the songs we had planned to sing.

In order to make us stand out, Chris brought some Santa hats for us to wear. About 35 of us or so all lined up and started off with a secular song (Frosty the Snowman), before we ramped it up to glorifying our Lord through such hymns as Silent Night.

As we were right in the middle of the main square outside the mall, many people gathered to watch us sing praises to our Lord, taking their own videos and cheering us on as well. When all was said and done, the head of security, who had not wanted us there originally, came up and told us that it was really nice what we did. We hope to change hearts one step at a time! Although we didn’t get to do everything we wanted to do that night, we hope that we were one step on the road to conversion for some of the people there. Perhaps someone there realized they haven’t been to Mass for a while, and that maybe they should this year. We won’t know this side of Heaven. But if it takes someone 1,392 steps to come into union with our Lord, and we can be step 847, then we will gladly be step 847!

Below is one anecdote from one of our team members as she was leaving the main square:

We had an opportunity to evangelize a young man working as a valet at Roku.

As we were walking by I asked him how business was going for the night. He said “good” then said “hey I like your hat. “ I told him about our caroling and asked him if he wanted to wear my hat to make better tips. He asked if it was free and I said “yes”. After he put the hat on I asked to take his picture. He allowed it but covered his face because he was working.

Then I asked him if he was going to church on Christmas. He is a member of St James and will be attending Mass. I asked if he owed a rosary and he reached for his pocket then looked up and said it was in his car. Then I asked if he was familiar with the story of the young French nun, visionary of the miraculous medal. He was not. When offered him a medal, he hesitated. I said “ it’s free!” “Sure”he said and took the medal and the pamphlet.

I asked him to please read the story to his family on Christmas Day because the story is so beautiful. He said he would. We left then because technically he was working and I did not want to get him in trouble. I attached his picture. Thank you for the Santa hat! Turned out to be a great talking point.”

Praised be Jesus Christ! Way to go team, in getting creative with spreading the Good News message in the midst of a secular setting! We should never be ashamed of the Gospel, but we should also not be afraid to use what is profitable in being able to spread what Christ taught in a language the culture can understand, whether it’s caroling or something else. When we are centered on the Lord and doing His will, He will provide the opportunities! Why don’t you join us?