“These signs will accompany those who believe…” 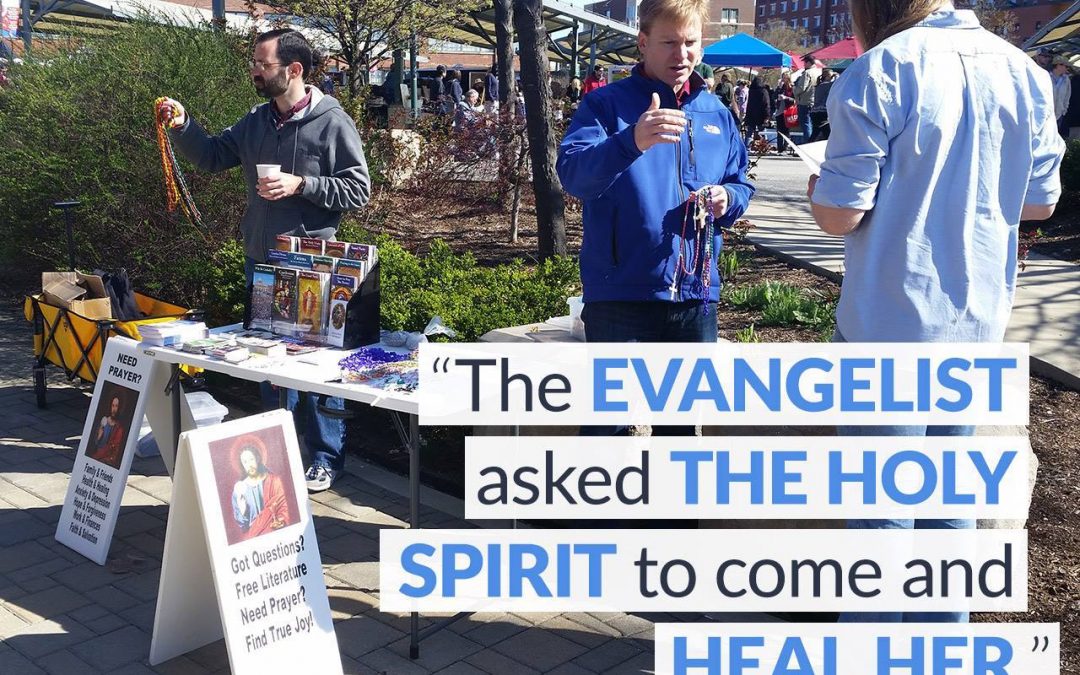 Bloomington, IN.  Praised be Jesus Christ! A team of evangelists visited the local Farmer’s Market to share the Gospel on a recent Saturday. There were a handful of remarkable encounters on this outing, but one of them, in particular, stands out. One of the team’s evangelists met a young couple. They were Protestants striving to live their lives for Christ, but not strongly committed to one denomination. The evangelist gave them “One good reason” why he chooses to be a Catholic: That Jesus Christ founded the Catholic Church, and promised to remain with it until the end of time. As he explained this to them from the Scriptures, the couple were very responsive, and truly interested in discovering the truth of this for themselves. They accepted the tract, “Pillar of Fire, Pillar of Truth,” and the books “Rome Sweet Home” and “Made for More,” and promised to read them. They also exchanged contact information with the evangelist, planning to meet him on another day for lunch.

As they were walking away, the evangelist had a thought, “I should pray with them!”, and he ran to catch up with them, asking if they would like to receive prayer. They accepted, and he prayed that the Holy Spirit draw near and fill them all. The couple was visibly moved by the prayer. Now, this evangelist had discerned in the past that he had been given a gift for prayers of healing, so he asked the couple if they needed prayer for any physical ailments. The young woman said that yes, indeed, she suffered from lymphedema, an incurable condition effecting the lymphatic system. She said that her pain-level was currently “20 out of 10,” and that her ankles were swollen.

The evangelist asked the Holy Spirit to come and heal her from the condition, and commanded the pain to leave and the condition to be healed in the Name of Jesus Christ. The woman stood up, and was amazed, saying that the pain was 100% gone! She started crying as she wiggled her ankles which were no longer swollen!

Praised be Jesus Christ! Please give thanks to God for His kindness to this young woman and her boyfriend, and pray for them and for the evangelist, as he follows up with them.
____