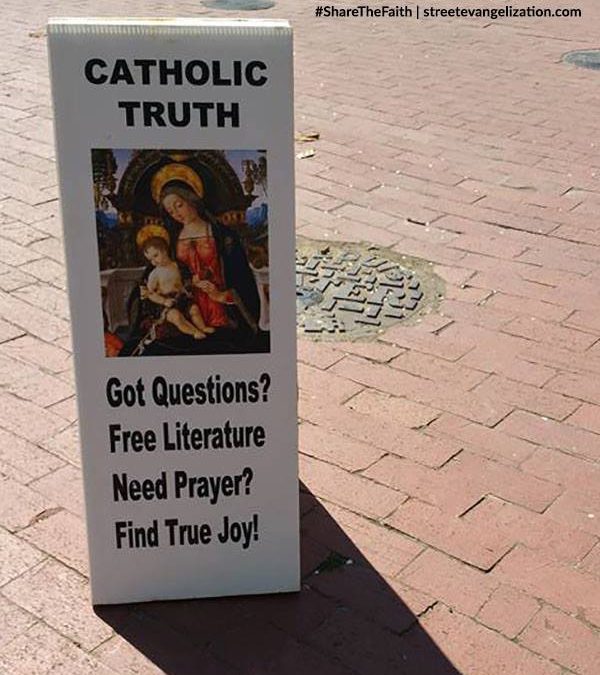 Just as St. Paul wrote different epistles tailored to different communities, we don’t use the same approach with everyone whom we encounter. Those who claim to be atheists and non believers will have different difficulties with belief than, say, a Christian of another denomination, or a person of another religion. Saint Paul Street Evangelization’s non-confrontational approach to addressing such issues as they arise is an effective way of engaging in discussion.

“Today’s outing was very fruitful as Deacon Mike and I encountered many people who needed prayer. One person in particular who really needs prayer is Nick who originally from the U.K. but has lived in the U.S. for a while. As I approached him, he quickly told me he was an atheist. I shared with him my witness and he kept on saying prove that what you are saying is true. I think he was expecting me to spout all this scripture at him as I did not want to get into an intellectual discussion with him, but mainly just stuck to my experience of God’s love and how God has worked miracles in our family. I think he let down his guard and after a while I asked if I could say a prayer asking God to reveal His love to him personally, and to my amazement, he agreed. Unfortunately he would not take any information, so pray that God would open his heart to the truth and that a seed has been planted.

Also pray for Cathy, for peace in her family situation; Julia and Randal, young adults who are seeking direction for their lives and took a lot of information; Robert whom I prayed with, for God to heal a valve in his heart; Nathan who is desiring to be baptized and took information and the list of churches as well as Doris who also has never been baptized and also took information and the list of churches; and Joshua whom we prayed with who needs prayers for his family and direction for his life.

May God continue to bless our little chapter and Our Lady guide us to bring the good news to his people and bear much fruit for His kingdom.”

Praised be Jesus Christ! We do not win converts by arguing or demeaning, but through love and humility. We should be able to answer people’s objections of course, and do so in a calm and reasoned way. But we must never forget that hearts are transformed by prayer and witness, not arguments. Join us!
____