“The Ministry of Just Showing Up” 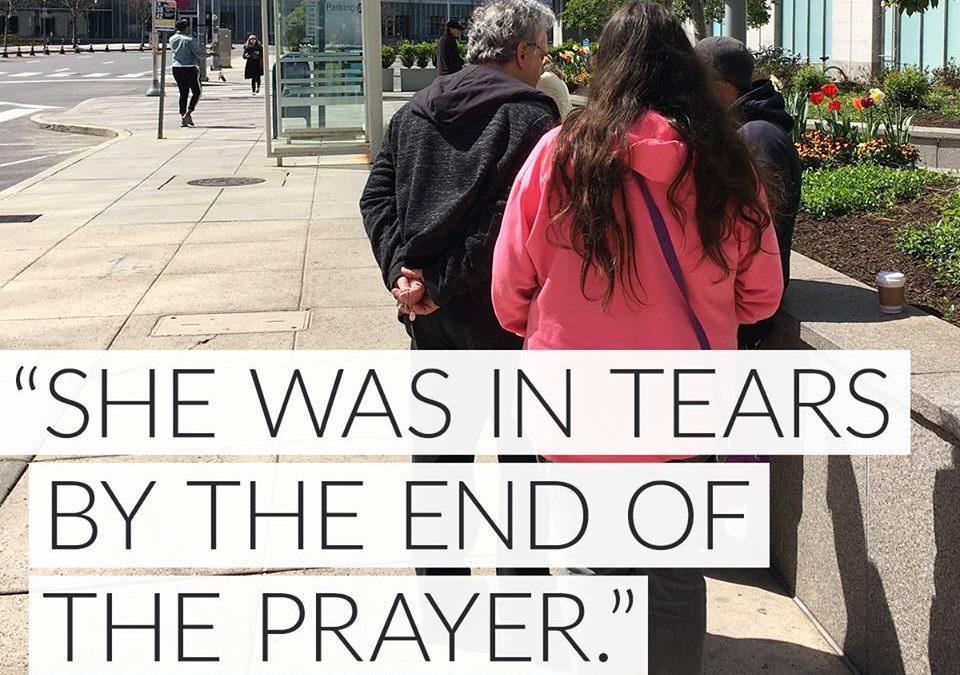 Philadelphia, PA. It’s always great when newly trained evangelists who have joined a team get to experience faith in action as evangelists for the first time. Nothing fully prepares you for street evangelization, but the most important part is the first step of just getting out there and doing it despite any fears and hesitations one might have. It’s the “Ministry of Just Showing Up”…and the results can be transformative!

“On this beautiful Saturday morning, our newest SPSE member Vincent and his daughter Isabel, who live across the Delaware River in New Jersey, volunteered to meet up with us and get some on-the-job training in street evangelization. Vince and Isabel had attended a six hour training workshop with us in February 2017, but had never had a chance to actually engage in our ministry. They agreed to come to Philadelphia and work with us, and we decided to meet up in Philadelphia’s Cathedral Basilica and then head out. After a bit of a hiccup at the Cathedral parking lot (which was packed with people attending a weekend retreat), followed by an unexpected detour near the Art Museum for a walkathon, we managed to wend our way over to West Philadelphia’s hospital area on 34th Street.

Within a minute of setting up our stand (indeed while we still stringing religious medals onto chains) a man outside Children’s Hospital spotted our sign and unhesitatingly approached us. His name was Ken (name changed), and we soon learned that his 9 day old son Ángel had been transferred shortly after birth in northern New Jersey for evaluation and treatment of his enlarged heart at Children’s Hospital. Ken also admitted that both he and his girlfriend have been in treatment for drug addiction for their son’s sake, and now struggling with Angel’s health problems. It was evident through his demeanor how earnest Ken was in overcoming his problem, and we lovingly spoke to him about God, reassuring him that the Lord wants nothing more than to come into union with all of us, most especially those suffering from the brokenness of addiction. He not only took a Padre Pio medal for himself, but asked if he could take a crucifix for his girlfriend. Ken also accepted a copy of the book Resisting Happiness, and after we prayed with him for a couple of minutes, he thanked us profusely before heading back into the hospital.

About 30 minutes later, Ken’s girlfriend came down with him, as he was so moved by the encounter that he convinced her to talk with us. She turned out to be a very loving and sensitive woman, and she poured out her story to us. She had been married for 15 years to a man who had died suddenly at the age of 38 in their home following several unsuccessful back surgeries. She and their 11 and 13 year old children have been struggling on many levels following the husband’s death, and to cope with her emotional trauma, became addicted to pain medication. She has to return to New Jersey in late April for addiction therapy, and is wondering how they will cope if Angel cannot be released from the hospital. We talked at length with them and prayed over her, and she was in tears by the end of the prayer. We offered her a copy of the book Everyone Needs To Forgive Somebody, and we were pleased to see that Ken was already delving into his book as well. Please keep this family in your prayers, as well as the following individuals that we also encountered:

Cody – young man in HUP with exacerbation of multiple sclerosis

Julio – for God’s blessing and assistance with his family.

Joseph – father of Dominic, a premature baby with a serious infection

Angel (baby) – for his excellent treatment healing and recovery.

Diah – mother of Diamond, a newborn girl who has heart problems

Anastasia – mother of Tyler, a young boy in CHoP

Amy – for healing from addiction.

Beth – whose boyfriend William is in HUP

Erica – whose husband Daryl is in HUP

Praised be Jesus Christ! Desperation will often bring us to our knees, and it is on our knees in prayer that we find the Lord! Thankfully such opportunities give us as evangelists the chance to pray for comfort and healing for those who are afflicted. Witnessing to Jesus Christ is always an exciting adventure–will you join us?