“Healing in the Name of Christ” 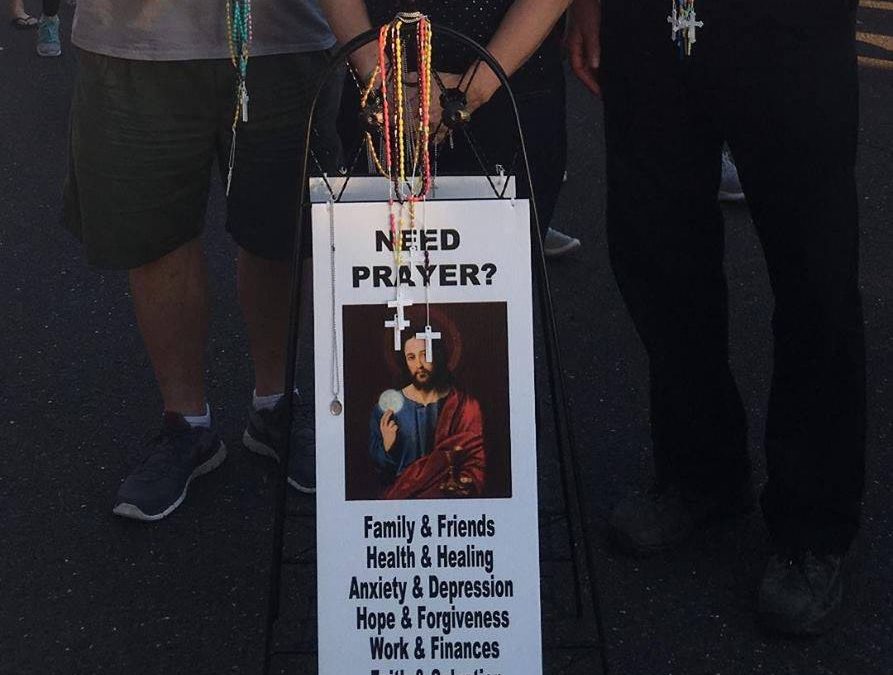 Port Huron, Michigan. Healing miracles can be a powerful witness to the power of the Holy Name of Jesus. Our Lord says that even if we have faith the size of a mustard seed, we would be able to move mountains (Lk 17:6). In our apostolate we are seeing ordinary Catholics becoming equipped to do the work of evangelization in Healing Ministry. A healing by faith may be dramatic or it may be quiet, it could be physical or emotional. But at the heart of it, the Lord longs to heal us of the things that stand between us and belief. As we will see from this report, God uses ordinary people of faith to accomplish His work.

I asked one woman who was looking at some holy cards if she wanted prayer for anything. She requested healing prayer because she’d been diagnosed with cancer of the brain a year and a half ago was given five years to live. I told her that I was on a healing prayer team and would be happy to pray with her. Myself and another SPSE minister prayed for her. We, as always, have faith that the Lord wants to heal her and that he will.

Another woman came up with tape and bandages wrapped all over her right forearm. I asked her what was up with her arm and she said she had torn ligaments from working with horses. She said her arm was in constant pain and she could not lift anything. My fellow prayer minister and I offered prayer. The woman reported she experienced a lot of warmth in her arm and she said it felt better. I asked her if she could test it out. She said she’d have to try to pick something up. We found a heavy duffel bag and she picked it up with ease saying that she could not do so before. Then we wanted to pick up something heavier so we found a wheel chair, which she was able to pick up with ease. We joked that someone should sit in it and let her try to pick it up. She was quite surprised that she was healed!

Next up a young lady (late teens) was looking at some of the medals and talking to one of the SPSE folks. I looked at her for some time felt that there was someone on her heart that she was thinking about and needed prayer for. I approached her and made some small talk. After a bit I said that I felt that the Lord had told me that there was someone who was weighing heavily on her mind and offered to pray with her for them. She started to tear up a bit and then began to tell us and I how her uncle had passed recently and they were very close. We prayed together for his soul and for consolation for her.

Next was a woman with a cane (I love people with canes!). She said she had constant pain and problems with her left side and sciatic nerve. I asked her what her pain level was on a scale of one to ten and she said “seven and a half”. I had her sit down, but this time I had a fellow prayer minister, who had never prayed for healing before, pray for her since God can (and does) use anyone to heal. I gave her suggestions on what to pray for and she took it and ran with it. The woman reported feeling a deep heat in her back and hip where my fellow prayer minister’s hand was. I asked her if there was anything she could do to try out the healing and she said she could can try to walk. I helped her up and we left the cane behind because I was holding her hand. We had walked about 25 yards and she seemed to be enjoying the stroll, but I didn’t know her or how much pain she was in so I asked her “how is it?” She said “Oh, I never could have walked this far this fast without a cane.” I asked her what her pain level was at and she said “zero”. She no longer needed a cane to walk.

Another woman came up who wanted prayer for her son who was an alcoholic. I told her how I used to do ministry at a rehab center so we talked about the problems he was facing and I gave her the name of an excellent rehab center and told about getting him a counselor, a sponsor and about insurance coverage for addiction – and of course we prayed for Jesus to intervene.

Another woman said her father had terminal cancer. We prayed for her father and, taking her hands in mine, I prayed for Jesus to impart healing into her hands and told her to go lay them on him and how to command healing in Jesus’ name (since I have done this in the past with some success). We both felt a lot of heat in our hands as we prayed.

Finally, I prayed over a man who had “lost his faith”. As he was a convert to Catholicism, I asked if he knew what “baptism in the Holy Spirit” was and if I could pray for him for this. “Yes, and yes – please”. Were his response. We prayed and he reported feeling a great amount of peace.”

Praised be Jesus Christ! What an amazing testament to God’s goodness and the power of faith in the work of healing. Jesus performed many miracles, as recounted in scripture, and he equipped his disciples to carry on his work of healing and proclamation. We are his disciples too, and are called to do the work even today! What a great gift and privilege, and what a good God we serve!