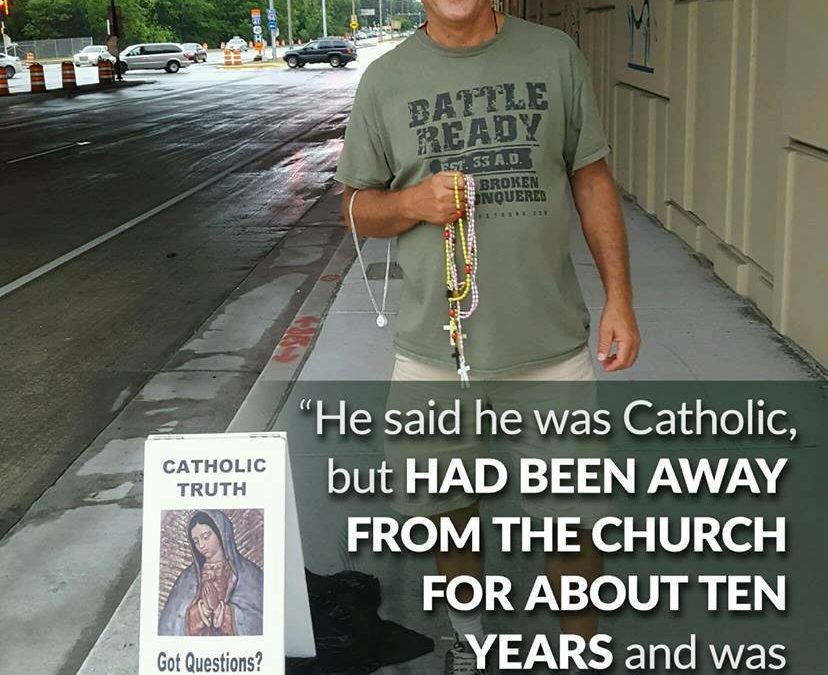 Kenosha, WI. Here’s a report from Dave: I set up near the lake front of Lake Michigan in Kenosha Wisconsin. The big event was an annual marathon with plenty of foot traffic. I was handing out rosaries, but couldn’t drum up a good conversation. So I did a quick prayer asking our Lord to send someone. Within about 2 minutes a young gentleman was running by me (he wasn’t in the race). I asked him if he wanted a free rosary, and he stopped in his tracks. He introduced himself as Alejandro and I offered him a rosary and asked him if he was Catholic. He said he was Catholic, but had been away from the church for about 10 years and was interested in coming back. So I shared with him, that this year was the year of mercy, and so it is great timing. I shared with him how important the Eucharist and the sacrament of confession was for me. We spoke for about 15-20 minutes. I felt good that I at least planted a seed. He actually came back with his girlfriend about an hour later, and I gave both of them a miraculous metal and gave her a rosary.

As the morning went on a young man named Joe stopped, and I offered him a rosary, and he also told me he was Catholic, but didn’t appear to be practicing. I asked him his age, and he was only 16, so I asked if he was confirmed, and it appeared he wasn’t, so I told him to contact his pastor at his parish and encouraged him to get more information. I shared with him the beauty of confession and the Eucharist. I also gave him a miraculous metal, and he went on his way. He also stopped back to see me and asked if I would give him a metal for his mother, and I joked with him that since tomorrow is mother’s day it get him off the hook of buying something for his mom. But I thought it was very considerate of him to get a medal for his mother.

I had a few other conversations with Catholic and non-Catholics. Most took a rosary, miraculous metal, or a pamphlet on confession, or why they should be Catholic. One gentlemen I spoke with was a marathon runner and used my shoulder to lean on while he worked out a leg cramp. He shared with me that he lived in the St. Paul area and he did some evangelization with another group several years ago. I shared with him that I was sure there was a St. Paul team up there and I gave him some information on how to contact SPSE.

Praised be Jesus Christ! Keep it up, SPSE teams! We are called to share the faith!