“Curiosity As A First Step” 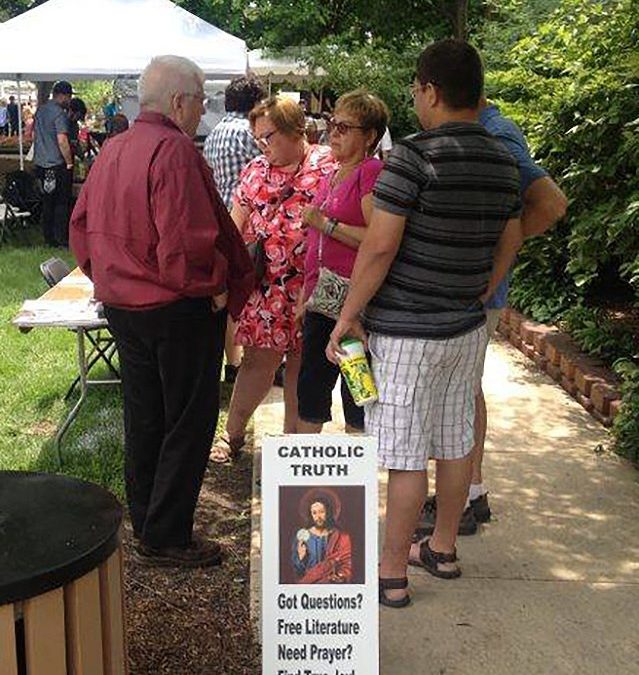 Joliet, Illinois. Many conversions to Christ and the Catholic faith often start with curiosity. What is it Catholics believe, and why do they believe it? Many people have gone through most of their lives without ever encountering a Catholic who practiced his or her faith, and when they do meet one, it can open the door to questions and a healthy curiosity. The Holy Spirit often uses this initial genuine interest to lead people ‘down the path’ a little farther, through encounter, books, and personal witness, to the Truth of the Catholic faith.

This report comes from evangelist Nick of the Joliet, Illinois SPSE team:

“One down in the books, and it seems to have been a great success! The Joliet Chapter of St. Paul Street Evangelization went out for the first time to the Taste of Wheaton festival in Wheaton, IL. We were out evangelizing on the streets for a little over 7 hours during this very well attended festival and many people were happy to see us! Of course, some people walked right by us and rejected our offers of prayers or rosaries, but no one was belligerent and we were able to talk with a wide array of people during our time there. We had 8 people come out and evangelize with us, so a big thanks to our station leaders, certified evangelists, and friends who came out to volunteer their time for this great apostolate!

We were able to pass out quite a bit of literature on a variety of topics from Petrine primacy to the divinity of Christ and from examination of consciences to copies of Trent Horn’s new book “Why We’re Catholic”. I think we probably gave away 7 or 8 copies of Horn’s new book, and we only did that for people that we were most engaged with. I honestly didn’t think we’d give that many away, but people were happy to learn more about a faith they weren’t too familiar with, or simply wanted to learn more! One young girl, Brooklynn, was out with her father and had just received the Sacrament of Confirmation the week prior. We congratulated her and told her we’d pray for her. But I related to her my own story of moving on to high school, and how, often, I wasn’t able to give a good explanation for my faith. I couldn’t tell others why I believed what I believed. I told her that I didn’t want her to be in the same situation, so I offered her a copy of Horn’s book which she gladly accepted. Her dad was overjoyed and thanked us for the gift.

She wasn’t the only one, though, who received the book. We also gave some to a few lapsed Catholics and an inquiring young man who will soon be baptized in an Evangelical church. This young man, a sophomore who is being homeschooled, approached our booth as his mom talked to another volunteer. He took one of the “Why Be Catholic” pamphlets and stood a ways off, but actually reading it! I wondered if it would be prudent to reach out to him again as he and another friend discussed and read the tract. After a few minutes, and his mother still talking, I asked the young man if he had any friends who were Catholic. He said that he did. I told him to feel free in asking me any questions, and he actually had some really good ones!

His first question was, “Do Catholics believe that they are saved by grace alone?” I could tell this was a smart kid! I told him that yes, as the Church has always taught, we are saved by God’s grace, but we must work with Him through our faith and good works, so that He may say to us at our judgment, “You have done well, good and faithful servant”. I gave him one of the “Salvation” pamphlets as well and we talked a little bit more about how faith and good works work into our salvation, and we got into a little exposition of St. James’ Letter. He also mentioned that his father reads quite a bit from Catholic authors, particularly on philosophical issues because, as his dad says, “Catholics know what they’re talking about here”. To my absolute shock, he mentioned that he (the teenager) has been reading Peter Kreeft and Dr. Edward Feser’s new book “Five Proofs for the Existence of God” for his home school! How awesome is that?!

I told him that I also had just gotten that book for Christmas and was starting to read it too, while also mentioning Peter Kreeft’s deep love for our Lord in the Eucharist, which led to a brief discussion of how our churches both understand our Lord’s words to “Take eat, and do this in remembrance of Me.” We talked more about this and about the differences between us, but we also focused on our commonalities. He told me that he was being baptized in a month, to which I told him that we are already brothers in Christ! While there are legitimate differences between us that cannot be swept under the rug by any means, I rejoiced with him in that he will be reborn in this great sacrament soon. We then prayed together, and I thanked him for his witness. He also took a copy of “Why We’re Catholic”, and soon after, following a visit to our website, he reached out to me again via e-mail, thanking me for the prayers and for answering his questions, telling me he’d let me know if he had more. Praise God for his willingness to learn more about the Catholic Church!”

Praised be Jesus Christ! What a great witness to the power of curiosity! Will you pray for these young people who are exploring and open, that our Lord Jesus Christ by the Holy Spirit may shower them with graces and lead them to Truth? And consider joining us in our work of planting the Gospel seeds in our world that so desperately needs witnesses!