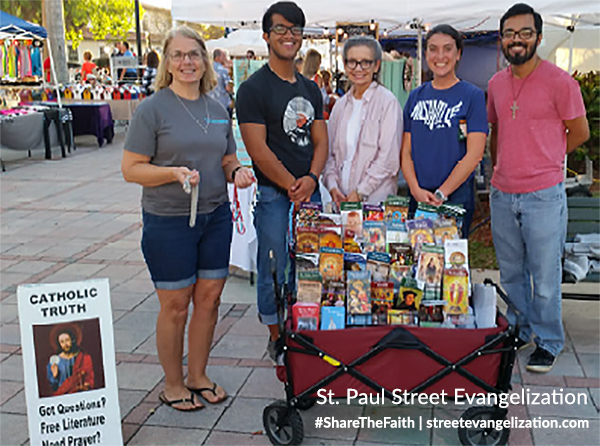 Fort Pierce, Florida. It can be easy for us to take our religious freedoms for granted. Many in other parts of the world face persecution and even death for following Christ. This is especially true for Muslims who convert from Islam to Christianity, who oftentimes are forced to worship underground. Our Lord Jesus tells us to “count the cost” of following him (Lk 14:28), and so their witness can be especially powerful.

This report comes from evangelist Janet of the St. Anastasia team in Fort Pierce, Florida:

“Antonio and I were the only evangelizers on the street this month at Friday Fest, but we had several really good conversations and encounters. We prayed and then set out handing out several Miraculous Medals and Rosaries on the way in to our usual sidewalk intersection. We met a young woman who walked up to the wagon of brochures. She had been wanting to learn how to pray, so we gave her a Miraculous Medal and rosary and the “How To Pray The Rosary” pamphlet and explained it. She wasn’t Christian or raised with any religion. I gave her a pamphlet on “Why be Catholic” and my contact information card if she had any questions at all, to feel free to call me anytime. We then asked if we could pray over her. She agreed and we asked the Holy Spirit to reveal himself to her. She was moved to tears and thanked us and appreciated that we were there at that time and place. I said with God there aren’t coincidences, he sent you to us, so we could give you the prayers to pray and the answers you needed.

We then met a couple that was very interesting. The gentleman was raised Catholic and loved the Church. Unfortunately his son was abused at the seminary here in Palm Beach and the Bishop did nothing but transfer the abuser to another state. He says he has forgiven, but there is still much hurt. We must pray especially for him and his son to receive healing from the Lord and to truly forgive those responsible. We let him know the Church has worked very hard on cleaning up the abuse, has apologized and has tried to make new policies so that will not happen again.

We were then introduced to his woman companion from Iran. She had been raised in a Muslim family but then Jesus appeared to her. Jesus told her who he was, that he was the Son of God and had died to save her. She became a Christian and moved to Switzerland. She had just been back to Iran for the past 5-6 weeks and her four sisters have converted to Christianity as well. They have to go to an underground Church to worship in secret. Muslims that convert to Christianity risk being killed. She was very courageous to go back and convert her family members. We then asked if we could pray over them and they said yes. After praying the gentleman asked if he could pray for my sister who is now Muslim. He prayed very charismatically and powerfully. He then informed us that he is a pastor at his own church. We will continue to pray for these separated brother’s and sister’s to come back to the Church that Christ founded with all the gifts, graces and sacraments to help us follow the Way, the Truth and the Life.

Overall we handed out over fifty Miraculous Medals and several rosaries in an hour. One woman received her Miraculous Medal and then came back a while later with her friend to get one for her. She then told me how she makes rosaries for many people around the area that request them and those that live in nursing homes. I thanked her for her service to those in need. So praised be Jesus Christ for allowing us to touch these people and for me to personally receive His word that the prayers, fasting and penance offered for the conversion of my sister and her nine children has been heard by God.”

Praised be Jesus Christ! The earlier missionaries like St. Francis Xavier and St. Francis of Assisi went boldly to foreign lands to bring the Gospel, risking much in doing so. Sometimes God calls us to foreign lands, but He also calls us to “find our own Calcutta” (in the words of St. Teresa of Calcutta) among our neighbors and to preach there. Saint Paul Evangelization Institute equips people to do the work of evangelization to lead souls to Christ and to His Church. The Gospel is a pearl of great price, let us not forget the precious gift of faith we have received, and work to share it with others. Join us!