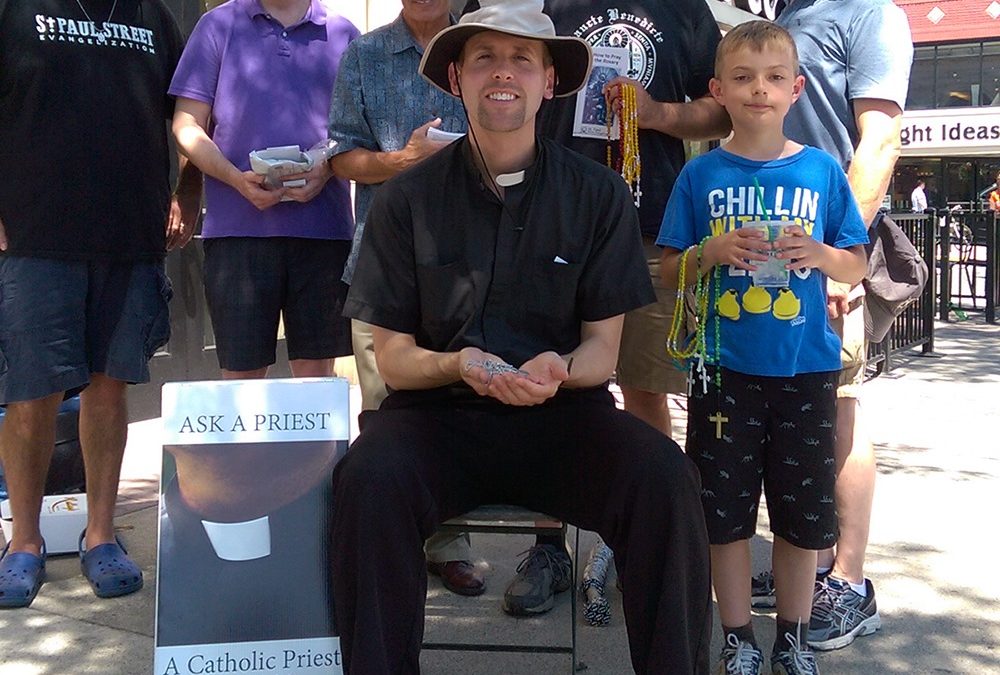 Royal Oak, Michigan. It is sometimes frowned on when Christian evangelists speak about the reality of Hell. But the fact of the matter is, if Jesus died on the cross to save us, just what was it that he was saving us FROM? We don’t have to be angry “bible thumpers,” but we can speak frankly that: a) there is a Hell; b) people go there; and c) you don’t want to go there! This may certainly drive some people away who do not have ears to hear. But for some, like the man in the following report, the reality of being in the torment of living an eternity apart from God can be just the wake up call one needs to turn to God and amend their lives.

“We had so many evangelists that we split up into a few teams, one on our usual street corner outside of Starbucks, another across the street on the adjacent corner, and another walking around two-by-two to pray and speak with whomever they might find on the street.

One man we met was a believing Protestant. He attends a local Protestant Church. “I believe in Jesus,” he said, “and I don’t want to go to hell!” I told him that we are Catholic Christians, that we believe in Jesus too, and that we don’t want to go to hell either! I began discussing what sets the Catholic Church apart from other denominations, such as the sacraments of the Church. I asked, for example, if he had been baptized. He said that he had not. I mentioned that at the end of the Gospel of Mark, Jesus sends out his apostles to proclaim the Good News to the whole world, and says that, “Whoever believes and is baptized will be saved”(Mark 16:16). According to Jesus, faith and baptism go hand in hand. In addition, after Pentecost when Peter is asked by a group of Jews what they need to do in response to the Gospel message, Peter tells them to, “Repent, and be baptized every one of you in the name of Jesus Christ for the forgiveness of your sins”(Acts 2:38). Baptism is the sacrament through which believers are forgiven of their sins and reborn as sons of God. The man said that he would go to the local Catholic Church this Sunday!

Our evangelists John and Patrick walking around the street met a man who considers himself an atheist. He refused the offer of a rosary, and said that he doesn’t believe in religion, but that he appreciates their views and does see good in religion. This led to a philosophical discussion. The evangelists discovered that this man has some very deep ideas about beauty, art, and nature. He was even inspired by the architecture in the Churches he visited during his time in Rome. In fact, his favorite movie is the Passion of the Christ, because of the beauty of the cinematography! John and Patrick shared how God has worked in their own lives, and the three had a fifteen minute conversation, finding much common ground.”

Praised be Jesus Christ! “Do not be deceived; God is not mocked.” (Gal 6:7). If our Lord Jesus spoke so often about Hell as a warning to us, should we not heed his words? We do not have to live in fear, but should be motivated by love, for “perfect love casts out fear” (1 Jn 4:18). And we should never forget the sacrifice God made for us, to “save us from the fires of Hell,” in giving His only begotten Son to die for us while we were still sinners (Rom 5:8). Join us in helping to proclaim the GOOD News to all!