“Jesus is there. That is the most important.” 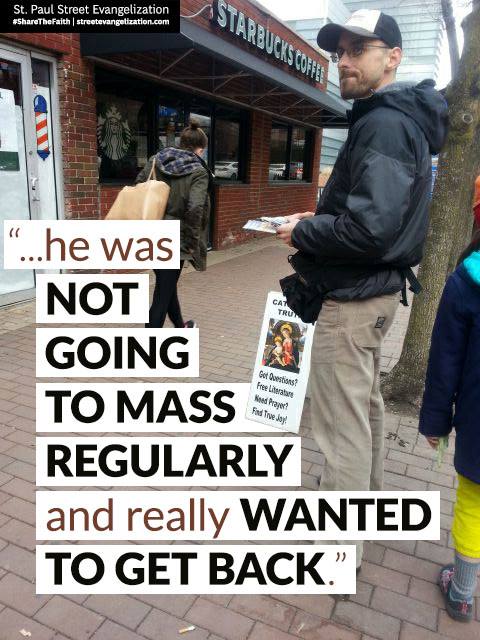 The following is an account of a short outing of the Cortland, New York team, from Caleb:

We spent about 45 minutes on Marshall St. near the SU campus. This was our second time there. We gave out 10+ rosaries, three of them in SU colors. Most people who received a rosary said “thank you” and walked on, however we did have meaningful (though brief) interactions with two:

A gentleman named Chris took a rosary. He immediately said he didn’t know what it was about, so I asked some basic background questions so as to better answer his question. He said he believed in God, was raised Pentecostal, and regretted that he was not regularly attending church. I told him I could relate to his Pentecostal background as I had also been there at one point. I explained to him the purpose of the rosary as prayer centered on Jesus Christ. He said he had a lot of questions but had to leave because he had to clock in, but asked if we would be around for a little while. I told him we would. He came by later. He then took some more information and said he didn’t have any time because he was working (he delivered take out for some local restaurants and had some bags in his hands) but that he saw the contact info on the card with rosary (we have a local team card) and was planning on sending me some questions. I told him he was welcome to ask anything, we would be willing to help. At that, I said I would pray for him, and he left.

Another young man named Henrik took a rosary. He said he was from Germany and was here playing on the SU soccer team. He couldn’t stay long to talk, but indicated he had been so busy he was not going to Mass regularly and really wanted to get back. He asked if the local campus Catholic chapel was good. I said, “What counts is that there’s a Mass, there is a priest; most importantly there is the Eucharist. … It’s Jesus … Jesus is there. That’s the most important.”

Praised be Jesus Christ! Are you interested in doing what Caleb and team Cortland does? All are called to share the Good News. Join us!