“The Eucharist is the Reason” 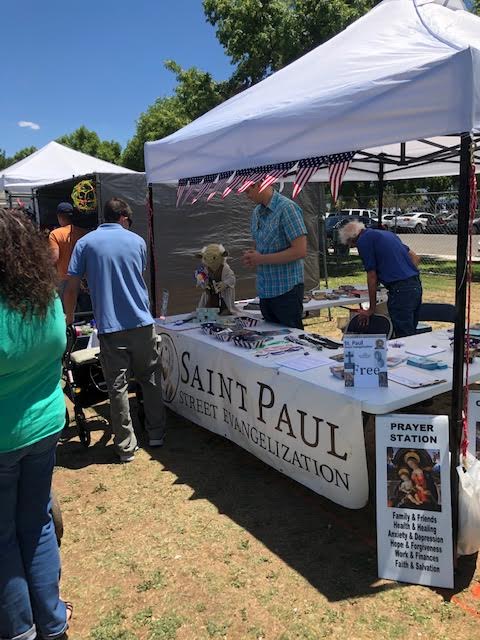 Sierra Vista, AZ. Many who’ve left the Catholic church don’t know what…or Who they leave behind. This story comes to us from evangelist Ed at the 4th of July celebration in Sierra Vista, AZ:

On the 4th of July, the City of Sierra Vista put together a fair of booths and food trucks and entertainment in the largest park in the city. St. Paul Street Evangelization had a booth that was decorated with patriotic flags and such.

Ed, Terry, Robert, Rachael, and Elizabeth were all there evangelizing. Ed spoke with many fallen away Catholics. One lady said she was no longer Catholic and Ed asked her why she left. Said she wasn’t getting filled. Ed said he gets completely filled with the Eucharist – which is the Body, Blood, Soul, and Divinity of Christ Himself. She asked, “how can that be?”  Ed said that in each of the Synoptic Gospels Jesus said to his Apostles to “Take and Eat, this IS MY BODY and the Cup to take and drink, for this is the Cup of my blood, the new and everlasting Covenant. Ed told her it was interesting that Jesus used the word Covenant because that word is how the world started. Adam and Eve were married in a Covenant – two people. Then it went to Noah and his family – Covenant of the rainbow, 8 people. Then Abraham and his Tribe – Covenant of Blood with Circumcision then Moses and the Covenant of the Law and his Nation – the Ten Commandments – and then David and his Kingdom  with the Ark of the Covenant and finally Jesus with the Cup of his Blood, shed for you and for many for the forgiveness of sins”    So it went from a Husband and Wife to a Family to a Tribe to a Nation to a Kingdom to everyone!
Ed told her that when Jesus said the words in John 6, about eating his flesh and drinking his blood, he used the word Trogo, which means to Chew loudly or gnaw, instead of using the world Eat Politely. He truly meant to EAT HIS FLESH! and DRINK HIS BLOOD and only Priests of the Catholic Church have the Apostolic succession where a Bishop laid hands on them to get this power and the laying on of hands goes all the way back to the Apostles.
She took brochures about the Eucharist, Confession, Salvation, and about Hell. She took Ed’s card too and said she would listen to the MP3 talks about the Eucharist on them.
Praised be Jesus Christ! When you know and understand the Eucharist, you never leave the Church.