“She had not been to church in 30 years” 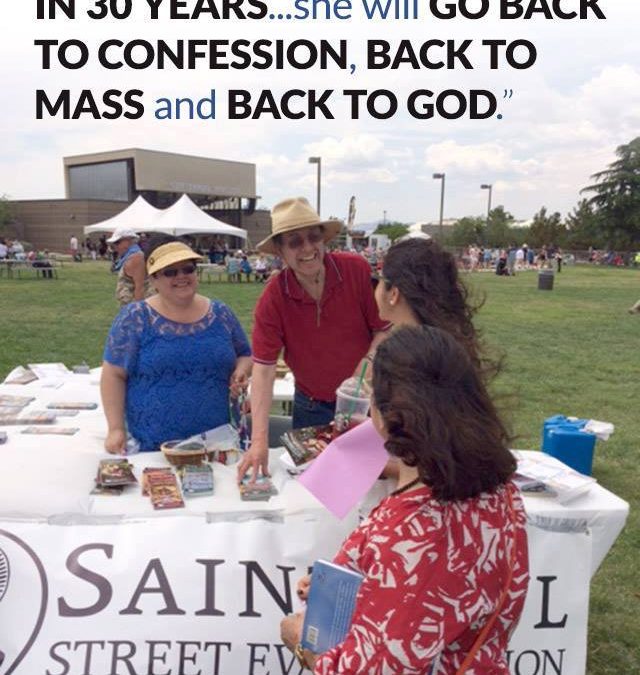 From our evangelist Ed:

On July Fourth, the Sierra Vista Team had a booth at the big park here. What a busy day it was. We gave out over 200 Rosaries, over 300 pamphlets and many medals and CD’s.
Some of the highlights are: Ed, Gert and Lydia spoke to a woman who had a son in prison. She had not been to church in 30 years and was turning to God for help. The three of us and Terry prayed for her son right then and there. Ed spoke more with this woman and she gave us her info to stay in touch. She told us she will go back to Confession, back to Mass and back to God. We showed her the healing power of God and she responded.

Ed spoke to a Mormon for half an hour and explained that the teaching of the Mormons of a “great apostasy” simply did not happen. He said he would go home and research that. Ed told him that when Jesus said “The gates of the netherworld would not prevail against his Church” and “I will not leave you orphans” and “I will be with you always even unto the end of the age”, Jesus was not joking. He was with us all through time and prevented such an apostasy from happening.

There was a man named Jeff, sent to us by his 85-year-old mother. Jeff was in need of a job. We all three prayed over Jeff to have the Lord send the right job for him. We prayed for his soul too.

It was a great day and we spoke with at least 25 people who had left the Church and are now thinking about or made commitments to come home to the Church.