“This Is My Body” 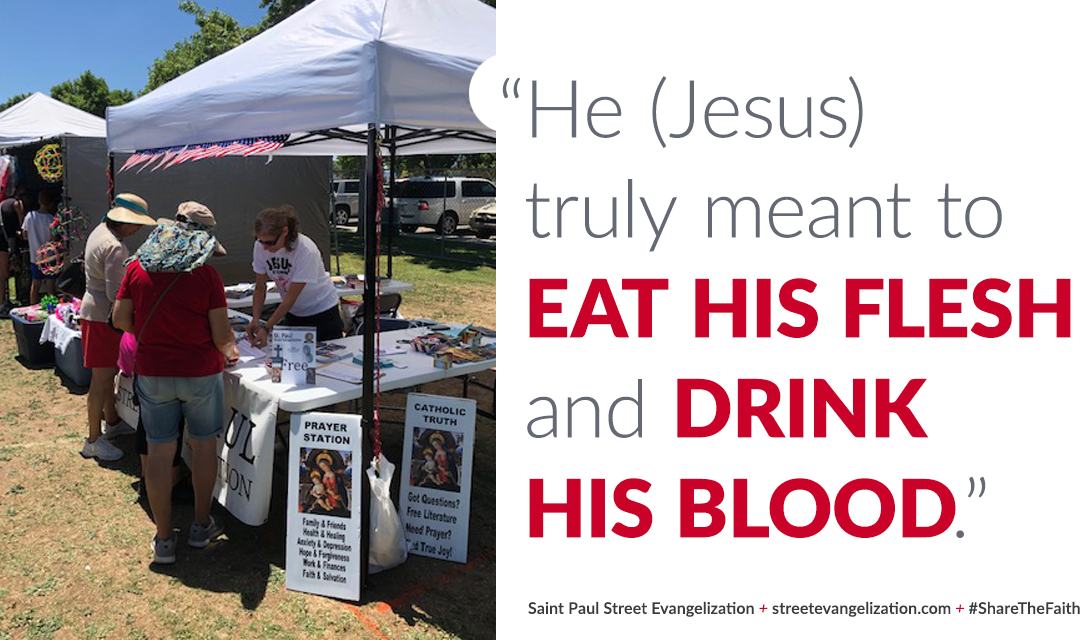 Sierra Vista, Arizona. The Eucharist is the source and summit of Christian life (CCC 1324). It is so central to our faith that many who leave the Church become impoverished, and those who stay (despite the abuse and scandal) do so because of the Eucharist. It is interesting to note that many did leave when Christ gave the teaching in John 6 on his flesh as food and his blood as drink, and the necessity of eating and drinking them to gain life eternal. It was a very hard teaching and repugnant for those of Jesus’ time to accept. Many left as a result (Jn 6:66). But Peter gives the worthy answer: “To whom shall we go, Lord? You have the words of eternal life!” (Jn 6:68).

The following report comes from evangelist Ed of the Sierra Vista, Arizona team:

“On the 4th of July, the City of Sierra Vista put together a fair of booths and food trucks and entertainment in the largest park in the city. St. Paul Street Evangelization had a booth that was decorated with very patriotic flags and Yoda had a patriotic pinwheel and a red, white and blue Rosary. Ed, Terry, Robert, Rachael (and her four-year-old daughter), and Elizabeth all were out evangelizing in this wonderful booth.

Robert on his way in stopped at a booth where a candidate was running for US Congress and spoke to him about the Faith. This young gentleman was knowledgeable about the Faith as he studied Catholicism and mentioned Thomas Aquinas and others. Robert gave him some brochures to study some more.

Ed spoke with many fallen-away Catholics. One woman said she was no longer Catholic and Ed asked her why she left. Said she wasn’t getting filled. Ed said he gets completely filled with the Eucharist – which is the Body, Blood, Soul, and Divinity of Christ Himself. She asked, “how can that be?” Ed said that in each of the Synoptic Gospels Jesus said to his Apostles to “Take and Eat, this IS MY BODY and the Cup to take and drink, for this is the Cup of my blood, the new and everlasting Covenant. Ed told her it was interesting that Jesus used the word Covenant because that word is how the world started. When Jesus said the words in John 6 about eating his flesh and drinking his blood, he used the word “Trogo,” which means to chew loudly or gnaw, instead of “eat politely.” He truly meant to EAT HIS FLESH and DRINK HIS BLOOD. She took brochures about the Eucharist, Confession, Salvation, and Hell, and took Ed’s card as well and said she would listen to the MP3 talks about the Eucharist on them. When you know and understand the Eucharist, you never leave the Church!

Ed, Terry and Robert prayed over two people who were sick, one of whom was in a wheelchair. Ed gave a flyer to those who did not go to church which described how people who go to church weekly live longer and happier lives. Many people thanked us.”

Praised be Jesus Christ! We are nourished by the Body and Blood of Christ. Without the Eucharist we have no life in us–it is central to our Faith! Have you ever thought of inviting someone to Adoration, just to spend a few moments before the Lord truly present in the Blessed Sacrament? It can be a powerful way to expose someone to grace and power, love and mercy, spirit and life made fully present. A great way to evangelize. Way to go team!