Explaining the Sacrament of Reconciliation 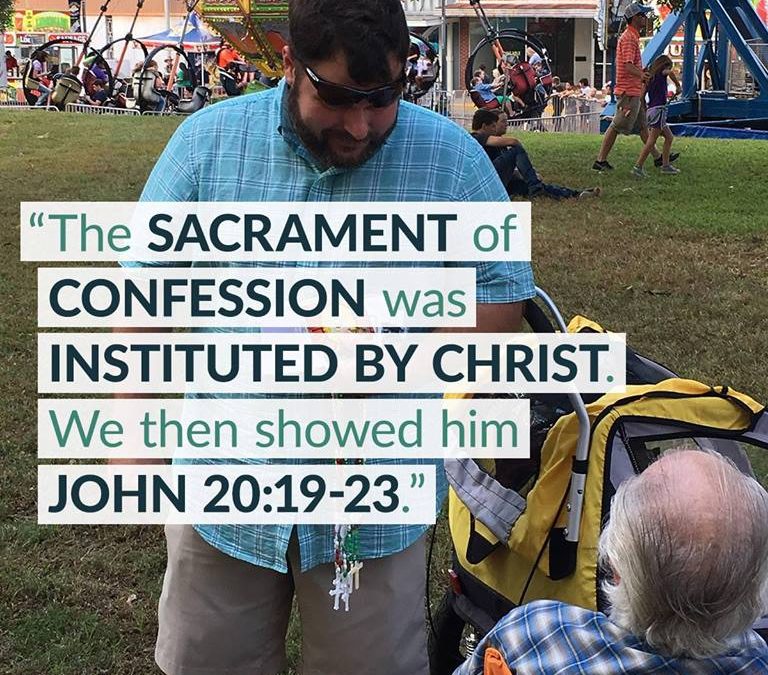 Gilmer, TX. This story came to us from Allison: The Tyler and Gilmer SPSE teams went out to the annual Gilmer Yamboree, a very popular local event visited by thousands of people over several days. Henry, Janet, Sherman and Allison walked around handing out rosaries, holy cards and pamphlets to numerous people. We met many wonderful people.

Philip had never considered becoming Catholic for several reasons but most importantly, he said, because – he said – “the Church invented the practice of confessing sins to men.” He felt this was unthinkable since God alone forgive sins. Allison explained that the Church agrees that it is God alone who forgives sins, but the Church did not invent this practice. The Sacrament of Confession was instituted by Christ.

When it was pointed out that we can even see this in Scripture, he contested there was no way his King James Bible said this anywhere. We then showed him John 20:19-23, explaining that elsewhere in the Gospels, Jesus tells us we need to forgive others without fail. Yet here, Jesus gives the Apostles a unique authority not only to forgive sins but also the authority to NOT forgive sins, which is significant and remarkable. Jesus is establishing the Sacrament of Confession. And having this authority, how could the Apostles know my sins unless I confess my sins directly to them.

We also see that Matthew, one of these Apostles, will refer to this unique authority in his own Gospel. In Matthew 9:1-8, Jesus meets a paralytic. He forgives the man’s sins and then heals him physically as a sign Jesus has the power to do everything He says. In verse 8, we are told the people “marveled” and “glorified” God because of the authority they now see had been given to “men.” What authority does this refer to? The healing of the paralytic, though incredible, would not have likely made His Jewish audience marvel because the Old Testament Prophets worked wonderful healing miracles like this. But what was new and shocking to the people was Jesus’ claim to have the authority to forgive sins. And then Matthew is indicating to us that this same authority that astonished them was given to “men” –plural. And who were these men? We refer back to John 20 – the Apostles, with Matthew being one of them!

As we continue to read the New Testament, we see Paul, a bishop and successor to the Apostles, refers to his own ministry of reconciliation and his authority to forgive sins (2 Cor 5:18; 2 Cor 2:10). Throughout the early Church, writings outside of the Bible also confirm the Church has always held that Christ uses the priests and bishops as His own instruments through which He forgives our sins. This has nothing to do with the holiness or power of the individual human beings but God uses these ordained men to heal us spiritually.

And hearing the words of Christ from the lips of the priest, ‘Your sins are forgiven,’ is a moment that truly does move your soul and leaves you with no doubts about God’s merciful love and transforming power. We explained the amazing personal experiences we have had through the Sacrament of Confession and how this is a beautiful gift we’ve been given.

Allison gave Philip several pamphlets including one on Confession and asked him re-read these Bible passages in prayer. He said he would definitely do that and commented that if we were right on this, he would join us for Mass one Sunday to learn even more about the Catholic Church.

We met so many other people so please keep them all in your prayers especially Philip, Brian, Brenda, Peggy and Gloria.

Praised be Jesus Christ! Thanks team, for being willing to share the ancient faith of the Church with our separated brethren!

We could use more Catholics evangelizing publicly. Join us!