“When The Holy Spirit Takes Hold” 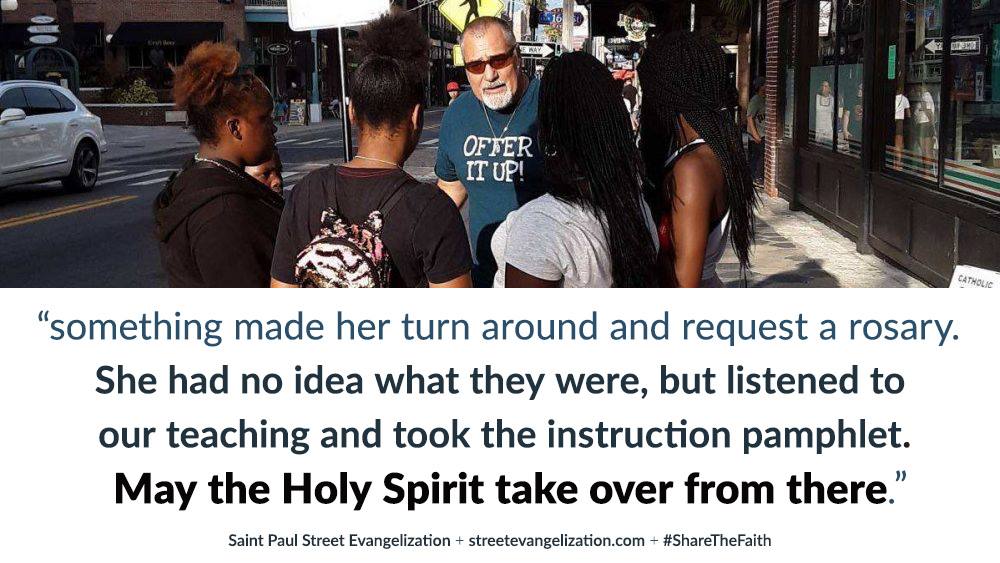 Tampa, Florida. The Holy Spirit has a way of working through the most subtle actions. Whether it is a subconscious impulse, a gut feeling, or a gentle prompting, the movement of grace often comes in a whisper, a stirring. It is as it says in scripture, “The wind blows wherever it pleases. You hear its sound, but you cannot tell where it comes from or where it is going. So it is with everyone born of the Spirit” (Jn 3:8). One minute you may be walking down the street when you feel the Holy Spirit tugging at your sleeve, and the next thing you know you are talking to some Catholic evangelists!

The following report comes from evangelist Bill of the Tampa, Florida SPSE team:

“For June we decided to try Ybor City but switched to the night (5:30 – 9pm) to avoid the heat and the loud, hate-filled group we encountered in January.

The evening was a resounding success. The foot traffic was high and we encountered about 100 individuals, received many prayer requests and handed out many rosaries, medals, and pamphlets.

In the picture above I am telling the story of the miraculous medal to some non-Catholic teenagers. They loved hearing about the angel and identified with St. Catherine as they enthusiastically placed their medals over their heads.

We also had a lengthy conversation with a Baptist preacher who emphasized literal based creationism as his way of “debunking” those who believe science over the Bible. We explained to him that as Catholics, we have no such issues since we know that the Book of Genesis was never intended to be a scientific explanation of how God created the world. We tried to avoid his “scientific” arguments for a 6,000-year-old earth by pointing out our salvation has nothing to do with the age of the earth, but that’s where his focus remained.

There was also a young lady who had a tiny “aha” moment. She gave the typical “I’m good” response to our offer of a rosary, and then after she had traveled 20 paces down the sidewalk, something grabbed her, made her turn around and request a rosary. She had no idea what they were, but listened to our teaching and took the instruction pamphlet. May the Holy Spirit take over from there.”

Praised be Jesus Christ! God’s grace can cut through in those little moments when we stop to listen to the voice of God. This is the two-second window opportunity that our evangelists have to share the kerygma, plant some seeds, and get people thinking about life beyond just this world. As they consider these things more and more, it is Truth that awaits them at the end. Join us!