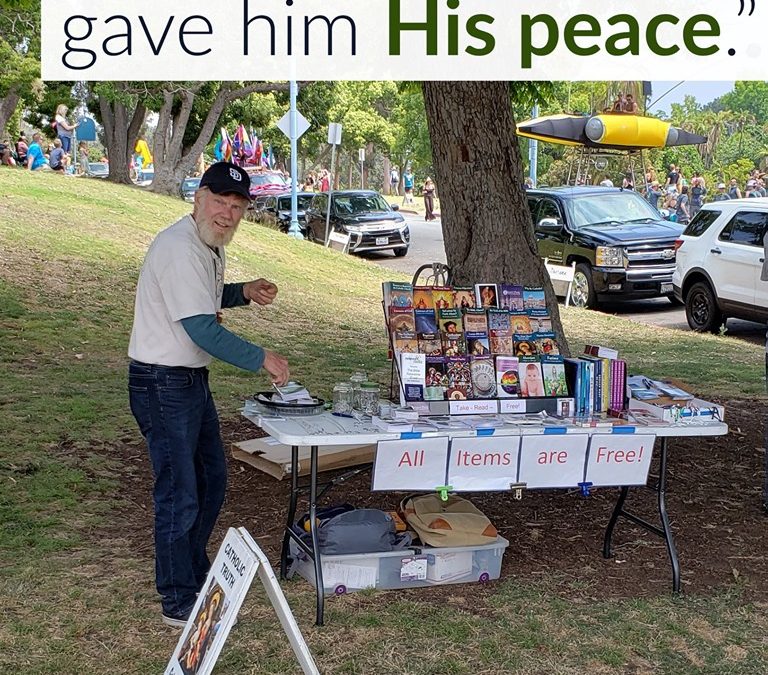 San Diego, California. There is a parable in scripture of two sons: the father asks them both to work in his vineyard. One son said no initially, but changed his mind and went. The other said ‘I will go’ but never did. Which one did what the Father asked? (Mt 21:28-32)

This parable is a great reminder that sometimes we can “change our mind” about a variety of spiritual things: we may want to sleep in but decide to go to Mass anyway. We may decline prayer initially, but then realize we could really use it. As we will see in this report, one young man had just such an experience of “changing his mind” and being blessed as a result.

“Joe Carton, a team leader from East County, San Diego, was leading a group in Balboa Park on a recent Saturday. This was his third year doing it. I was actually there the day before in Balboa Park leading a team street evangelizing at another part of the park. So at first, I was telling myself I didn’t need to or felt called to go. But as it got closer to the event, I did feel the Lord calling me to go. An old missionary friend came down from orange county to evangelize with me. There were five evangelists in total.

We were both a little nervous and knew we had to really pray hard and beg for the Holy Spirit to set us on fire. So we had a time of Praise and Worship in the parking lot with an Icon of Our Lady and the child Jesus. After a few songs, I felt really alive and knew God was with us and I was no longer afraid. We took an electric scooter up the hill a mile to where the team was set up in the park. The SPSE team was set up at the end of the parade but at the beginning of where the entrance of the festival was, so there was heavy foot traffic of all the people attending the event. We gave out our smiles, prayer cards, medals, rosaries, pamphlets, and even some hugs.

One divine encounter I had was with a young adult named Tim. I gave him a Miraculous Medal, explained to him what it was, and asked him if he needed prayers. He said yes but didn’t want to be prayed for. I asked him what was going on and he explained how his mother was deported and his sisters are having a hard time. We talked for a while and I was able to share the Gospel with him and encouraged him to start praying and going to church. He opened up about how he used to be an atheist for a while but because of some recent mental health issues and his mother’s deportation, he started seeking God. I offered again to pray for him but he refused again. Guided by the Holy Spirit, I end up sharing about how my friend suffers from severe anxiety that it gets so bad that he feels like crawling into a hole and doesn’t want to get out. I shared how I would pray for him, and it would help. Right then, his facial expressions changed and he asked if I could pray for him. We prayed for him and asked in the name of Jesus for God to give him His Peace, to fill his heart and let it overflow with His Love, we prayed for God to take his anxiety away, for the healing of his mental illness and prayed for his mom and sisters. Afterward, I asked if he felt anything and now smiling, he said he felt lighter, and that all the muscles in his back released. I told him it was Jesus who gave him His peace. We exchanged info and I plan on following up with him soon.”

Praised be Jesus Christ! It’s more important what we do than what we say. As our Lord says, “let your yes be yes and let your no be no.” (Mt 5:37) But also, the promptings of the Holy Spirit can lead us sometimes to change our mind about doing or saying something that we should pay attention to. We all need prayer, as the saying goes “everyone is fighting a hard battle.” Great job team, in being persistent in charity!