“The demand was simply overwhelming” 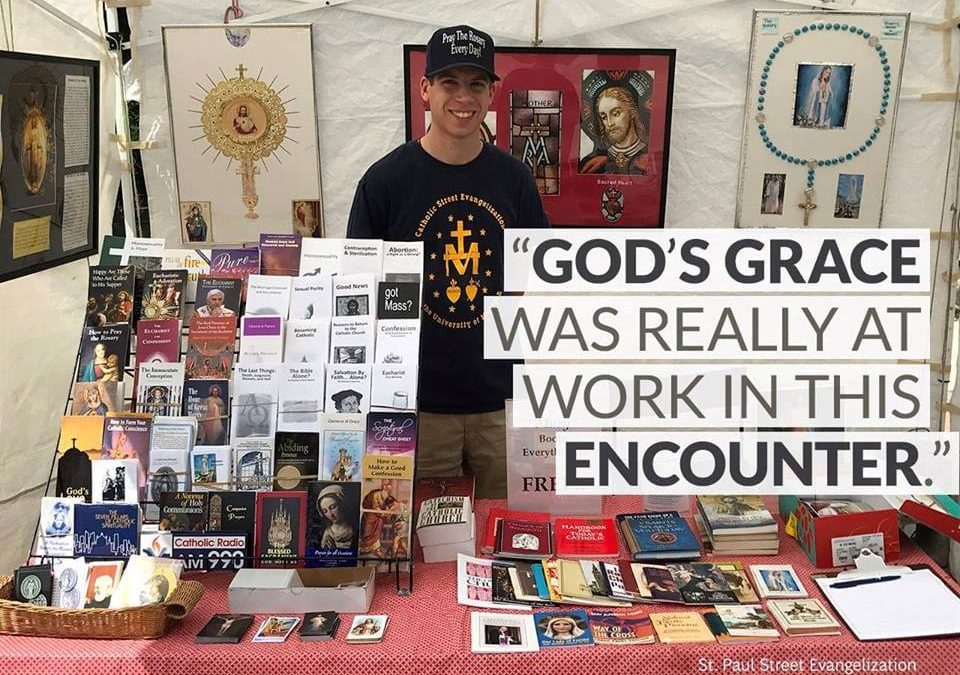 SPSE teams from Ann Arbor and Detroit combined to staff a “Mary, Mother of God” evangelization booth at the National Strawberry Festival in downtown Belleville, Michigan. While this annual summer festival is somewhat of a misnomer (this writer did not eat—nor even see—a single strawberry the entire time), it was certainly not lacking in people with hearts open to Jesus Christ, His Blessed Mother, and His Holy Catholic Church.

Throughout the duration of the three-day festival, our Marian booth offered free rosaries, Catholic literature, miraculous medals, and other religious items to the throngs of people passing by. Right from the beginning, it became apparent that this was one of the most receptive crowds we have ever encountered. Despite our booth for the most part being well staffed, the demand at times was simply overwhelming. Children, couples, families … devout Catholics, lapsed Catholics, lots of Baptists … people who were shocked to find out the rosary wasn’t a necklace; people covered in tattoos and bodily piercings; people who wanted an extra rosary for their friend, grandchild, or significant other.

While so many people and conversations tend to all run together in the memory, one unforgettable highlight involved one of Michigan’s U.S. Representatives, who was taking part in a parade that passed by our booth. For whatever reason, the parade was momentarily held up, leaving the Congresswoman stopped right in front of our booth. Wasting no time, our evangelist picked out a rosary to match the Representative’s bright-red dress and offered it to her. She accepted, and even more surprising were the words that came out of her mouth: “I could really use this right now.” The sincerity in her voice led our evangelist to believe that God’s grace was really at work in this encounter. Indeed, please say a Hail Mary right now for this congresswoman’s conversion—especially regarding the sanctity of human life and marriage.

We originally brought around 1,000 rosaries to the festival, thinking we’d probably have quite a few left over at the end. As it turned out, we had to have several hundred more rosaries dropped off to get us through the final day. We also collected names of over a hundred people to add to our prayer list. In your charity, please pray for these people—and for the salvation of the souls of all those who God led to our booth.