“Blessed are you when men revile you” 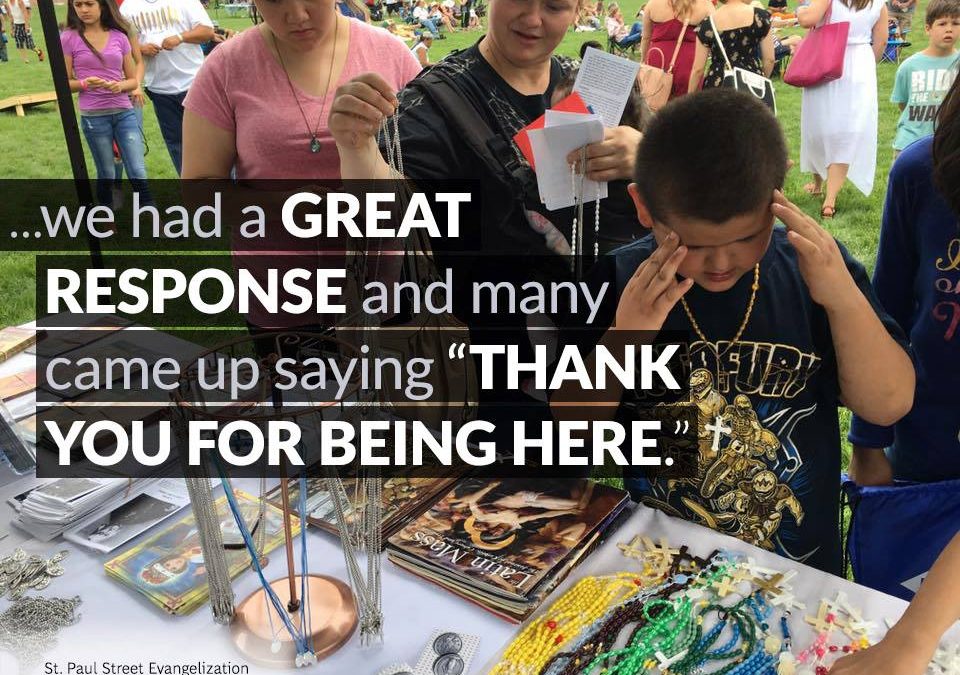 Denver, CO. This report comes from SPSE evangelists in Denver, Colorado: When our teams go out to evangelize, open conflict is very rare. This is because our peaceful approach. But on occasion, our mere presence in public, sharing the Catholic faith, is enough to draw forth hostilities. This was the case for a recent outing led by Steve, the coordinator of the Littleton, Colorado chapter.

We recently attended the “People’s Fair” in Denver, as well as a fair in Colorado Springs. In Denver there were people who had real problems with us. Probably ten people approached us on the first day just to yell at us. Planned Parenthood and NARAL were there, the Freemasons were there, and LGBT groups and atheist groups were there. The “Who’s Who” of who hates us were there!

Despite all the pushback we had, we had a great response, and many came up saying “thank you for being here when all these other groups are here.” A guy came up and wanted to learn about Confession and the Eucharist because he had read about these Sacraments in prison, from where he had just recently been released. We heard quite a few good stories. We also chatted with the Muslims for a bit – they were there giving out Korans.

Praised be Jesus Christ! In his sermon on the mount, Jesus Christ taught, “Blessed are you when men revile you and persecute you and utter all kinds of evil against you falsely on my account. Rejoice and be glad, for your reward is great in heaven, for so men persecuted the prophets who were before you.” As long as we continue to fulfil our vocations to share the Good News of Christ, we will not be without persecution. If they persecuted the Lord, they will persecute His servants. Let us continue to be His servants by proclaiming the truth, and drawing near to Him in prayer and the Sacraments!