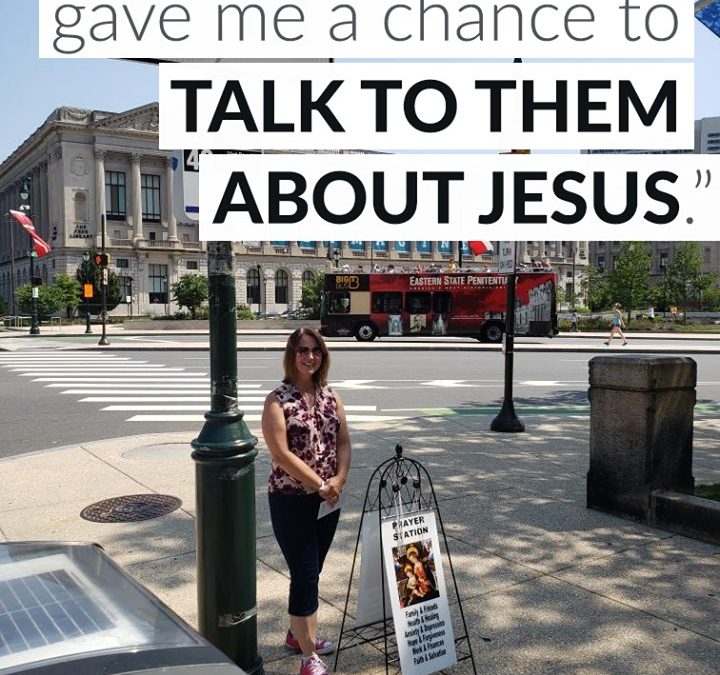 Camden, NJ. The following report comes from evangelist Brenda with the Lower Bucks/Philadelphia team: I approached four men who were standing in the shade by a car, listening to music and drinking. They took rosaries and directions for praying it from me. Explaining the rosary gave me a chance to talk to them about Jesus. When I asked if they had any prayer requests all but one did. I asked if they wanted to pray now together. Three liked the idea, but one said no, not while they had been drinking.

I asked him if he had ever heard the story of the Wedding Feast at Cana. He hadn’t, so I shared it with the four of them. I explained that it was obvious that Jesus doesn’t object to responsible drinking in moderation. He agreed that we could pray together. As I concluded praying, he turned away. It seemed because he had tears in his eyes. The one who didn’t have a prayer request now wanted to give me one and one of the others asked if he could have another rosary for his son. It was such a good encounter.

Later, I approached a car with a gentleman sitting in it. It ends up that he had come there to pray, he was looking at the water and the trees, but didn’t know what to pray, he had nothing with him, when I walked up to him and asked him if he would like a rosary. He got out of his car and shared his story with me. His son back in October went to Mexico for a shot, I believe it was for his arthritis, he asked his dad if there was anything he wanted from Mexico (they are Mexican) and said he would be back next Wednesday. He has never come back. The FBI and the police in Mexico have been searching for him. The Mexican police asked him to come down and give a DNA sample to check it against dead bodies. So far they have had negative results for 100 bodies. He goes down every two months to do his own searching, but has to keep coming back for economic reasons. He was sitting in his car feeling empty when I approached him. After he shared his story with me and we had talked for sometime, I asked him if he would like to pray together. We knelt down on the ground and prayed together. He was so grateful he said. It meant so much to him praying together and that I showed up at his car offering him a rosary exactly when I did. Before I left, I gave him two (one for his wife) Our Lady of Guadalupe medals. His missing son, not only left parents behind, but a very young child. Please pray for all involved. As you can imagine, they are really hurting.

Praised be Jesus Christ! If we desire to be God’s instruments, He will use us in the most amazing ways. All we have to do is imitate Our Lord, saying “not my will, but yours be done” (Luke 22:42)