“Nothing is free! What’s the catch?!” 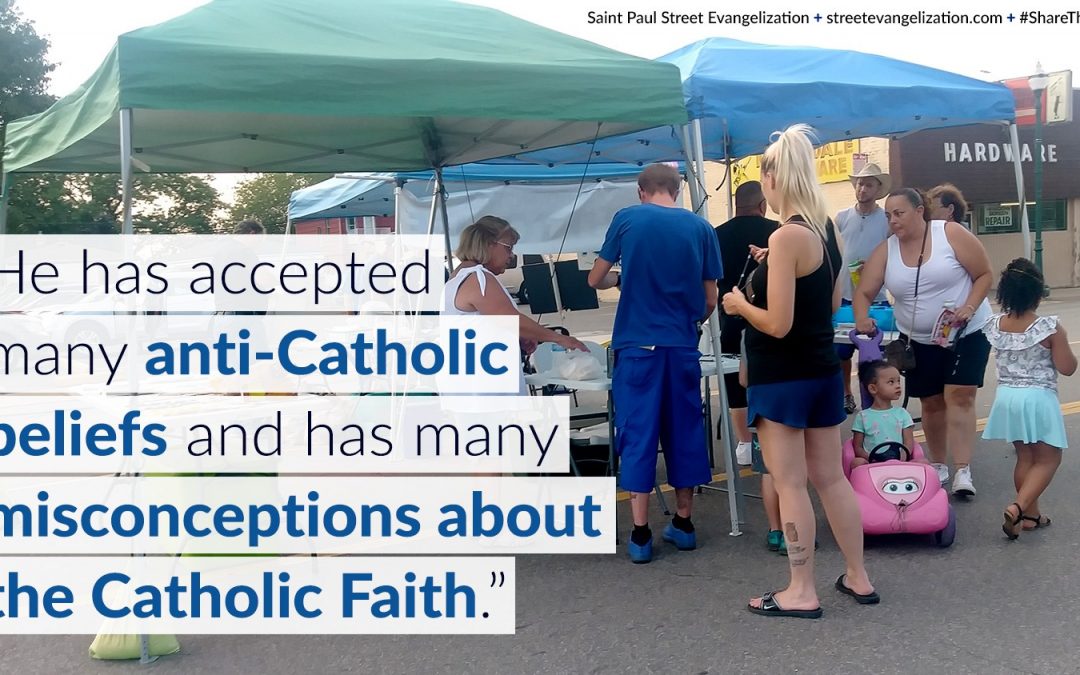 Melvindale, MI. We encounter many souls who believe false things about God and the Catholic Church, or perhaps they simply don’t care. Thankfully, our God continuously comes after us. In Psalm 23 (“The Lord is my shepherd…”), we read the line “Surely goodness and mercy shall follow me”. We usually think of shepherds as leading their flocks, but this one also follows. In fact, the word “follow” in Hebrew, radaph, has a greater intensity than simply follow. It means to pursue, chase or even persecute. What a strange and wonderful thought…God “persecuting” us with his goodness and mercy! May we as evangelists be open to sharing that persecuting love with the lost.

The following report comes from evangelist Mark with the Detroit Downriver team:

For the sixth straight year, we had a booth at the Melvindale Street Fair. Bill, Jovita, Margaret and I evangelized and gave away about 150 rosaries. We had many fruitful discussions, and evangelized many Muslims as well as Protestants and fallen-away Catholics.

One encounter involved Cathy, an elderly devout Catholic, and her middle-aged son, Clint. They approached our table, and I offered free rosaries to both of them. Clint, who is not religious, exclaimed that “nothing is free!” and “what’s the catch?!” I said that we are simply encouraging people to pray and inviting them to take their spiritual life more seriously. Despite being non-religious, Clint has an appreciation for Catholic art, architecture and sacred music. He recently visited France and lamented about the fire at Notre Dame. He also visited Sacré-Cœur and brought back souvenirs for his mom. They did not accept any sacramentals but our conversation certainly “watered the seed that God already planted” in the heart of Clint.

We talked to Tony, a former Catholic, who would be best-described as non-denominational. Unfortunately, Tony has accepted many anti-Catholic beliefs and has many misconceptions about the Catholic Faith (especially Marian devotion and the Real Presence). Bill admitted that many people, Catholic or not, have misconceptions about what the Church teaches. Tony asked us many questions and we were able to answer all of them. However, he answered less than half of our questions and often changed the subject. We ended the conversation by talking about the problems of an increasingly secular society. We both lamented that people are becoming more and more hostile towards God and Judeo-Christian values, and we agreed to pray for the conversion of sinners and the world.

Praised be Jesus Christ! Please pray for both Clint and Tony, that they return to the Catholic Church, and pray for all of those who live separated from grace.