“I know what they are … they’re rosaries!” 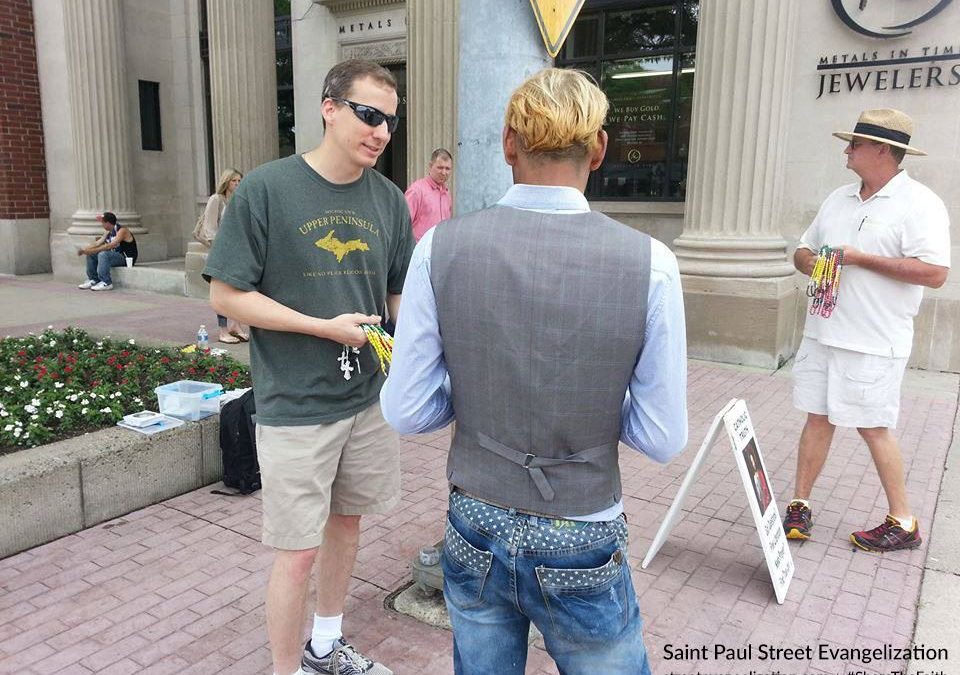 Royal Oak, MI. A recent Pew Research Center report shows the number of Catholics in America continues to decline. Some say it’s due to the recent scandals, while others have trouble with one church teaching or another. Still others, like the man in today’s story, just never found a church that met their expectations after leaving a beloved parish. Whatever the reason, it’s a great opportunity to share the power of the Eucharist and confession, and that God is very anxious for their return…just like the Father in the story of the Prodigal Son.

The following report comes from evangelist Anne with the Royal Oak team:

Aaron and his teen daughter sat on a cement planter while we put some rosaries out so people could choose one as we stood nearby. I went over to collect the rosaries so more people could be seated on this beautiful summer evening in front of a busy coffee spot. I greeted Aaron and said “let me move those.” He responded, “I know what they are…they are rosaries…I was an altar server for many years at St. Luke’s”. Then he continued with how after the parish had merged with two others, he tried out the others but never felt like they were the right place; he moved to a neighboring city and never wound up back in any church. Then he shared how four family members died in a short period of time and the devastation this had on his family. He had lots to share, from details of two of the deaths to how he has no church now…and everything in between. His daughter listened with interest to the conversation. I listened with love asking the Holy Spirit to guide my words. I gave a brief testimony about feeling far from God for a period of my own life and the effects of coming back in full swing. I mentioned the importance of the Eucharist and confession. They both accepted a rosary and a pamphlet on confession and praying the rosary. It was a great conversation, and they were open to prayer at the end as well! The daughter had some academic and friend concerns that were included in the prayer along with all that Aaron had shared that he wanted prayer for. Included was a petition for the two to find a spiritual home.

Praised be Jesus Christ! Sometimes all it takes is a friendly ear and a warm, loving invitation to get former Catholics to seriously consider reverting back to the faith. Let’s pray Aaron and his daughter ultimately accept Anne’s gentle proposal to return, and that more and more souls respond to God’s generous invitation to come back home.