“When did you last go to Confession?” 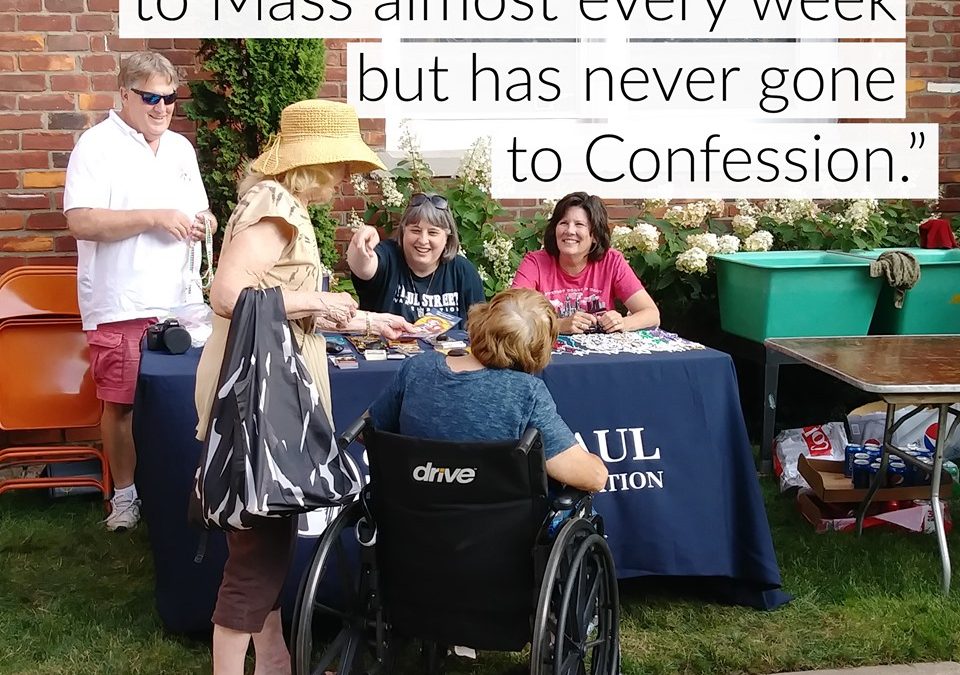 Detroit, MI. This report comes from Mark with the Detroit Parish Festival Evangelization team: Our team returned to the annual Pierogi Festival at Sweetest Heart of Mary Church in Detroit. This is the largest church festival in the city with thousands of people gathering for traditional Polish food, beer, polka music, and tours of the magnificent church. Our table was perfectly placed just outside the main door to the church. Bob encouraged everyone to go to Confession and asked them, “Do you go to church every Sunday? When was the last time you went to Confession?”

We spoke to Bill, a lifelong Catholic who goes to Mass every week but has never gone to Confession. Bob immediately gave him one of our pamphlets on the topic and urged him to speak to his pastor. I told Bill there were several priests at the festival, and if he were to ask one of them to hear his confession, he would probably say yes. I reminded Bill that it is a precept, a requirement, to go to Confession at least once a year. Bill was now eager to go and I pointed out a priest that I know, a faithful spiritual director, sitting 50 feet away. Bill approached Father, and they went to a corner of the yard and spoke in private. We certainly hope that Bill was able to make a good Confession during their conversation.

We also spoke to Tim, a retired U.S. Marine in his late thirties. He was offered a free rosary and promptly pulled out a paracord rosary from his pocket. Tim started praying it when he was serving active duty and continues the practice because it helps him deal with PTSD. Despite his devotion, Tim had only an introductory knowledge about the rosary and didn’t know how to meditate with it. We gave him a “How to Pray the Roary” pamphlet and briefly explained the different mysteries and promises to those that pray the rosary every day. Tim was thankful for the help, shook hands with each of the evangelists, and we prayed with him before he left.

Praised be Jesus Christ! What a joy it is to serve Our Lord at these gatherings, whether it’s helping bring lost sheep back into the fold, giving some spiritual instruction, or just some words of encouragement.