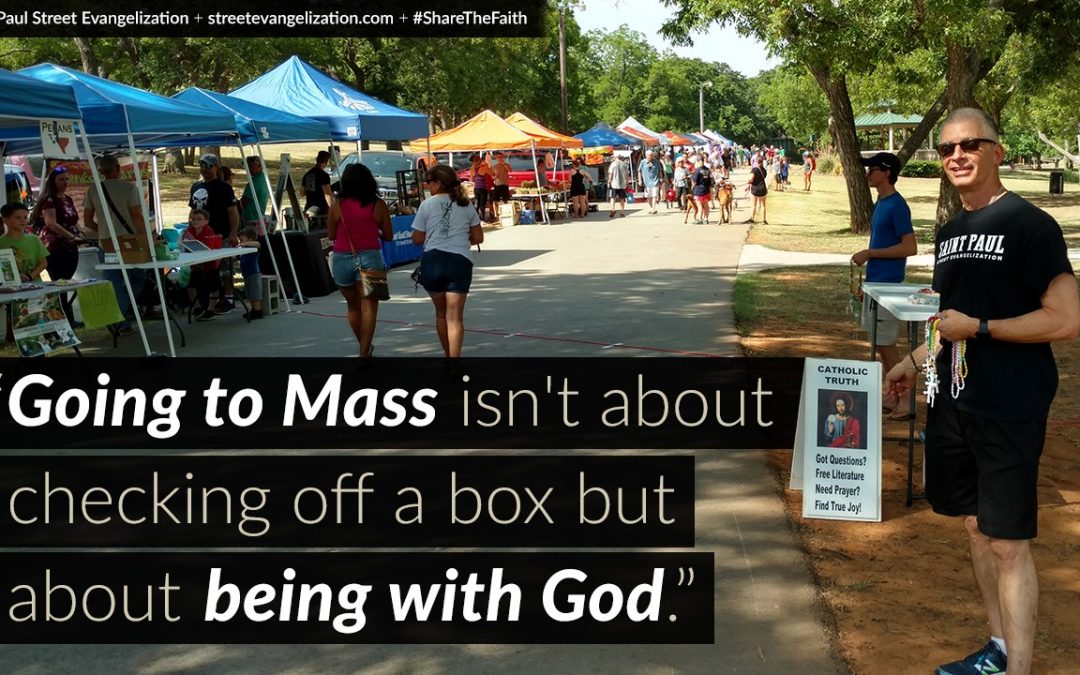 Fort Worth, TX. Sometimes outings take on a theme. It seemed like this outing we were often encouraging former Catholics to come back to the Church, although each were at different points in their journey. Such an important thing, to bring back a wayward Catholic. “My brothers, if anyone among you should stray from the truth and someone bring him back, he should know that whoever brings back a sinner from the error of his way will save his soul from death and will cover a multitude of sins.” (James 5:19-20)

The following story comes to us from the Fort Worth team in Texas:

Two evangelists from the Fort Worth SPSE team evangelized this past Saturday morning at the Keller Farmers’ Market. It was sunny and hot, and there was a lot of pedestrian traffic. We engaged with many people and gave out many Rosaries.

I spoke to a former Catholic man who is now Methodist. He was upset by the changes made by Vatican II. I encouraged him to attend an Extraordinary Form parish. He said he had seen a remarkable example of Christianity in his grandfather, who was a Methodist minister; consequently, after he left Catholicism, he went to be Methodist. I invited him back to the Church.

We met a couple who attend the SSPX parish in North Richland Hills. We pointed out that the SSPX is not under the jurisdiction of the Diocese of Fort Worth and the husband acknowledged many difficulties the Society has. We invited them to attend St. Benedict in Fort Worth, staffed by FSSP, under the jurisdiction of the diocese. I attend St. Benedict, and the following Sunday, I saw him come to Mass at St. Benedict. We met in the courtyard afterward and I told him it was great to see him there and he was most welcome. He thanked me for telling him about it. Thanks be to God.
We also spoke to a young mother with her children. She was Catholic but had drifted away from going to Mass because she is busy. We reminded her not to neglect her relationship with Jesus. Going to Mass isn’t about checking off a box, but being with God. She acknowledged this. We invited her to come back to Mass.

Praised be Jesus Christ! Please pray for the people we spoke with that they may find their way (or way back) to the One True Faith.