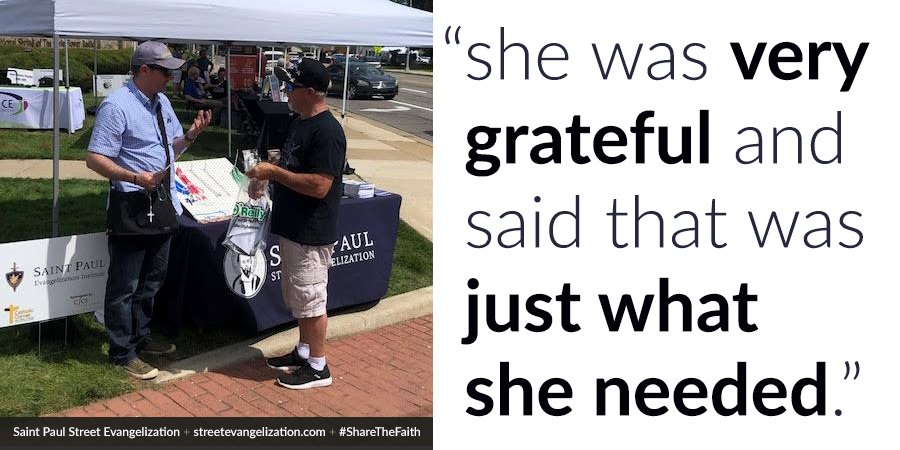 Royal Oak, MI. It’s no surprise that a huge event like the Woodward Avenue Dream Cruise is so popular in Detroit, nicknamed the Motor City. Over one million people turned out to reminisce and also see what kind of cars would be on the road this year. But during this massive spectacle, little moments of grace were also happening at the corner of 12 Mile and Woodward. And those who received were grateful. “Give something, however small, to the one in need. For it is not small to one who has nothing. Neither is it small to God, if we have given what we could.” -St. Gregory Nazianzen

We handed out many rosaries, pamphlets, medals (and a few books), and had quite a few good conversations during our time at the “Catholic Corner”. Here are a few of them:

A middle-aged woman stopped and chatted for a few minutes, and when asked if she had anything she needed prayer for, she shared that her neighbor was in trouble. She said he is an elderly man who is very wealthy, but has no belief in God. When she asked him about Our Lord and their relationship, he inexplicably responded, “He better sign on the dotted line.” So we prayed that God would remove obstacles and soften his heart so that he would turn to the Lord and change his life. After we finished praying, she was very grateful and said that was just what she needed.

I also encountered a couple who wanted prayer for their nephew who was struggling with a debilitating disease. After praying for his healing, I mentioned that there is something called healing prayer, and perhaps we could pray over him. They told me that he lives out of state, but hopefully they will pass this information on to his parents.

Praised be Jesus Christ! We persevered throughout the Dream Cruise weekend in sharing the Gospel, and are hopeful that some of the talks we had will eventually bear good fruit. “Let us not grow tired of doing good, for in due time we shall reap out harvest, if you do not give up.” (Galatians 6:9)