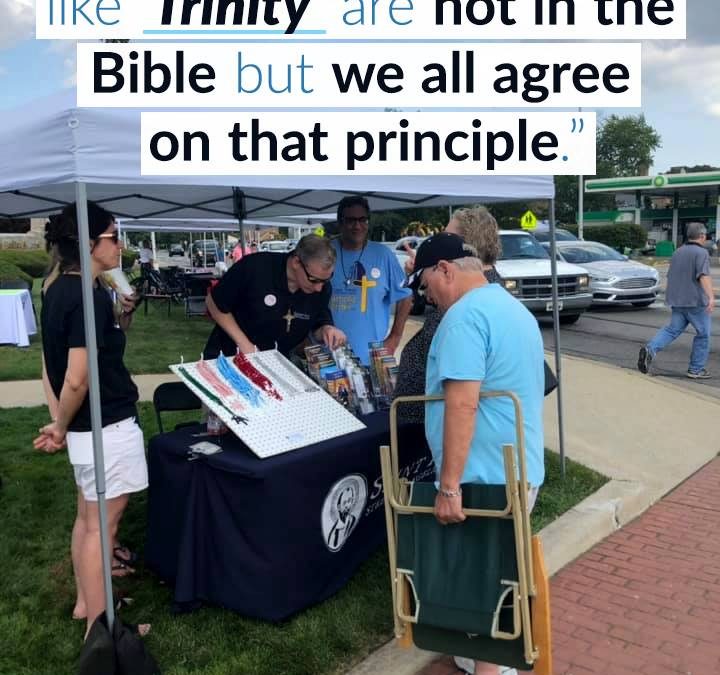 Royal Oak, MI. The following report comes from evangelist Mark with the Detroit Parish Festival Evangelization team. For the fourth consecutive year, I joined several evangelists at “Catholic Corner” during the Woodward Dream Cruise. This is the largest car festival in the world and the National Shrine of the Little Flower Basilica is right in the middle of everything. We offered free sacramentals to thousands of pedestrians walking by as well as drivers stuck in traffic.

We offered free rosaries to an elderly brother and sister, and asked the brother, Carl, if he was Catholic. Carl was baptized and raised in the Church but left after he married a Baptist woman. They couldn’t agree on which church to attend so they simply stopped going for decades. For the last few years, Carl has occasionally attended a large, nondenominational church. He professes a pluralistic view of religion and spirituality, saying that “all religions are the same” and “we all worship the same God.” Evangelist Bob referenced Matthew 16 where Jesus appointed St. Peter as the first pope and briefly explained apostolic succession. Carl surprisingly agreed that the Catholic Church is the one true Church founded by Jesus Christ. Despite this, Carl still attends a non-Catholic church.

Carl’s sister, Susan, holds on to many common misconceptions about Catholic doctrine and she goes to the same nondenominational church as her brother. Susan said that she does not believe in the intercession of saints and said that we should pray directly to God. Bob explained “the prayers of the holy ones” in the Book of Revelation and that saints pray to God on our behalf. Susan believes that a soul who is in heaven is incapable of intercessory prayer, to which we replied with “if a soul on earth can pray for you then why not a soul in heaven?” Susan changed the subject to Purgatory, which she doesn’t believe in because the exact word isn’t found in the Bible. I noted that, while “purgatory” is not explicitly named in the Bible, similar words like “purgatio” and “purgationis” are found in the Latin Vulgate. I also stated that common Christian terms like “Trinity” are not in the Bible either but we all agree on that principle.

We also spoke to hundreds of practicing Catholics from across the region. Many families graciously accepted our offers of rosaries, medals, and holy cards and promised to share them with their friends and family. Hopefully, our presence and ministry will inspire more Catholics to share their faith in public.

Praised be Jesus Christ! We were able to provide a spiritual work of mercy by instructing the ignorant while out at the Dream Cruise. This is truthfully the greatest gift we can give a person: knowledge that will potentially lead them to eternal life with God and the saints!