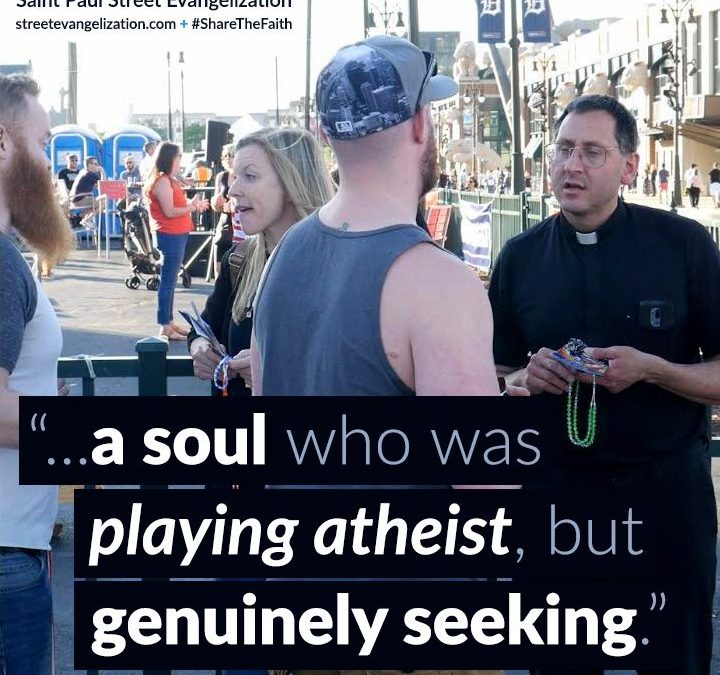 Detroit, MI. Ven. Fulton J. Sheen once said “There are not one hundred people in the United States who hate The Catholic Church, but there are millions who hate what they wrongly perceive the Catholic Church to be.” Some of the most important work evangelists do while they are out on the streets is to simply clear up misconceptions about the church. Let’s pray that those we encounter who are biased against Christ’s church may have open hearts to hear the truth.

The following report comes from evangelist Cindy during our Immersion 2019 conference in Detroit:

We had an awesome evening evangelizing at Comerica Park, with attendees from Immersion coming from all over America! Fr. Mike and I plunged right into the crowd with rosaries in hand. While handing out the sacramentals, I noticed a group of three guys, one with a vulgar t-shirt on. I asked if any of them wanted a rosary. One began to laugh, and really let me have it about the Catholic Church’s recent scandals.

I listened with empathy and apparently also made some good counter points, because he said things like ‘I can’t deny that’. I could see he was a real thinker, who had real disappointments, because of real expectations that clergy should be able to live a little better example than the rest of us. Raised Lutheran with a grandpa who was a pastor, he stated that God give him a reasonable mind and expected him to use it. His sisters always told him he just needs more faith. Fr. Mike joined in the conversation and genuinely captured his attention. I think he was more than a bit surprised to see an actual priest on the corner at a Tiger’s game! Fr. Mike was so sincere, jovial, and patient, looking beyond the salty language to see a soul who was playing atheist, but genuinely seeking. When asked to pray, he said ‘Not going to do that!’ but then he let Fr. Mike pray for him, and accepted a rosary from us which he put on around his neck.

After quite a long time, Fr. Mike decided it was best to tactfully end the conversation, but I think our new friend was enjoying hashing through some serious issues he’s having with the Church and would have been happy to keep right on chatting! Hopefully our respect and willingness to dive into meaningful issues with this one searching soul, will bring about better feelings for him toward the Catholic Church!

Praised be Jesus Christ! By just being themselves, speaking the truth in charity, showing genuine compassion, and leaving the rest to God, our evangelists are really helping to change hearts about the Catholic Church. Let us pray that confused souls continue to come to our evangelists on the street and are willing to hear the truth.