“God is Always There” 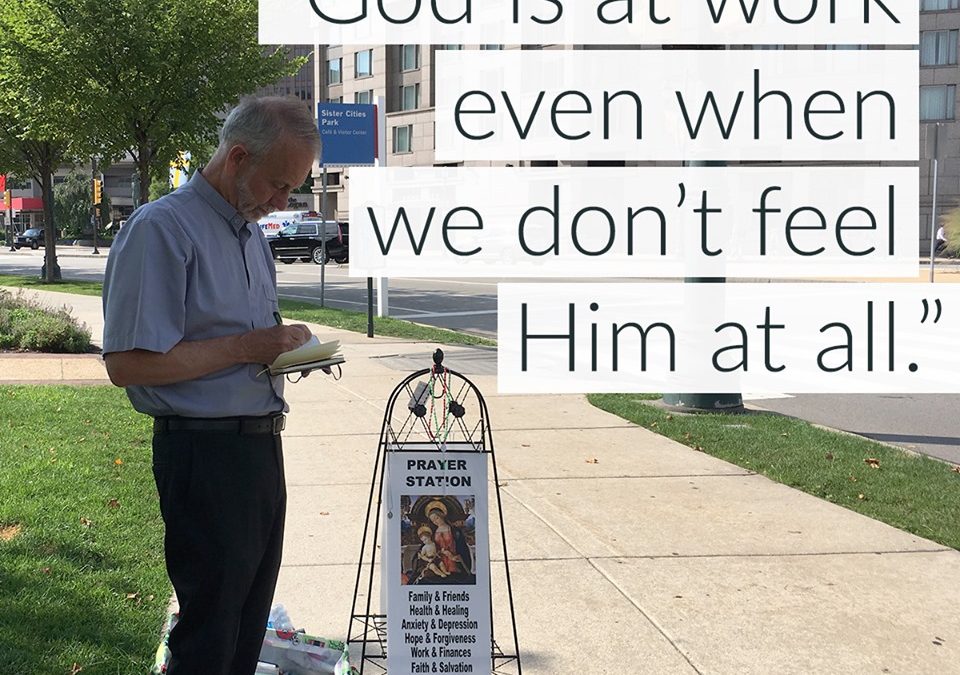 Philadelphia, PA. How often we see deep suffering in the lives of those we encounter on the streets! The best response an evangelist can have is to try and comfort them, pray for them, and to remind them that they are in good company when they suffer. “Those who share in the sufferings of Christ are also called, through their own sufferings, to share in glory” St. John Paul II, Salvifici Doloris

The following report comes from evangelist Nancy with the Lower Bucks team in Pennsylvania:

Deacon Mark and I went downtown to Logan Circle last Saturday, where many people were out and about at 9:30 am (probably trying to beat the worst of the heat coming later that day). We met some tourists, many people homeless or living in shelters, and other city/suburban folks. Altogether over 50 blessed medals and rosaries were shared in a two hour span.
Early on Dcn. Mark met a fellow named Carry from Kentucky who had been living on the streets of Philly for 3 weeks. He appeared tired and beaten down. Carry spoke of having recently lost his fiancé to a sudden heart attack. Dcn. Mark told of how God is at work even when we don’t feel Him at all. In our depths of suffering, He is always there. They prayed together and Carry was pleased to be given a crucifix to wear and he planned to try to let God show him what to do with his life.

Frequently people on bikes ride by without any stopping, however, that was not the case with Marshall. Nancy asked as he was pedaling by if he would like a blessed medal or a prayer. Marshall stopped right away, got off his bike and said he would love to have both! Marshall asked us to pray with him about his finances. He said that he had been at work and was dropping his bike down the street where he could safely leave it, to get a train or bus back to Upper Darby where he has a small studio apartment that doesn’t fit his bike. Marshall told of how he got behind on some bills but made phone calls to the companies and setup payment plans and that he knew it would work out alright. He prays greatly for God to bless him in making it work out alright and making ends meet. We talked about how working out a situation instead of just hoping it will go away is what God wants us to do and that He guides us how to do it always, if we be quiet and listen in prayer. Marshall agreed greatly. He was glad to put on a crucifix and ride off.

Praised be Jesus Christ! As Catholics, we know that without the cross, there can be no crown. While we are out evangelizing, it is crucial to help others make sense of the suffering in their lives. And the only way it can make sense is if they know Jesus.