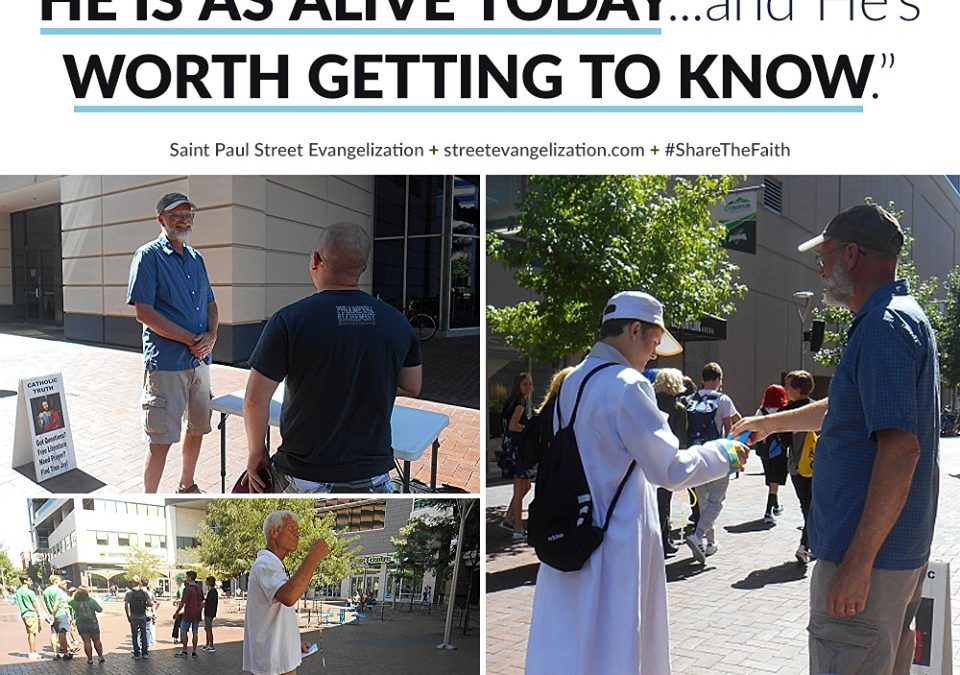 Boise, ID. Modern humanity has forgotten about God. It’s evident everywhere you look. Earlier this year, L.A. Archbishop Jose Gomez lamented that “The crisis I see today is this. In our society, we no longer seem to share any coherent or common understanding of what it means to be a human being. As I see it, this problem is rooted in our society’s broader loss of the awareness of God.” SPSE evangelists encounter this during every outing. Let us pray for an increased vigor towards sharing the Gospel, to assist God in rescuing our human race which has gone astray.

The following report comes from the Boise, ID chapter:
Three evangelists were available for today’s outing. A dad stopped and wanted his three young children to know about all different religions. He explained the Rosary to them as being “the same as” what practitioners of a non-Christian religion use. Our evangelist tried to explain the devotion a little more accurately, as a meditation on the life of Jesus Christ. They each accepted a Rosary and its pamphlet.
Two separate people stopped at our table asking evangelist Lucy to explain Catholicism. She gave them a variety of pamphlets and exclaimed, “Know this: Jesus is real. He is as alive today as He was on the Day of Resurrection. And He’s worth getting to know.”

One woman politely declined to receive a Rosary from us. A few minutes later, she returned with her aged mother-in-law, who was delighted to receive a Rosary. The elderly woman kissed it, and our hands, over and over. Though she spoke no English, her actions told us how much she loved the Lord. She also accepted a copy of our little prayer sheet with the Rosary prayers in Spanish. Her daughter-in-law said that it was because of her mother-in-law’s devotion, and that of her own mother, that she and her family are people of Faith.
A convention was going on a few blocks away, celebrating a genre of art that lends itself to costume wearing. Several groups of young peopled dressed in costume passed our table. Very few of them, though, seemed open to Christianity. One group accepted Rosaries, but not its accompanying pamphlet. One of them proclaimed she herself was divine, while another professed to serve her enemy and that of all mankind. God save them!

We received a particular prayer request: for “Marilyn”, a non-believer diagnosed with aggressive cancer, and for “Joy”, her non-Catholic Christian daughter. Lord, grant Marilyn the grace to come to believe before she dies.

Praised be Jesus Christ! Humanity still needs a Savior, whether we know it or not. Please pray for the Boise chapter and all the SPSE chapters asking God to grant that much good fruit for His Kingdom comes from all our efforts.