“Our Leader rolls up His sleeves” 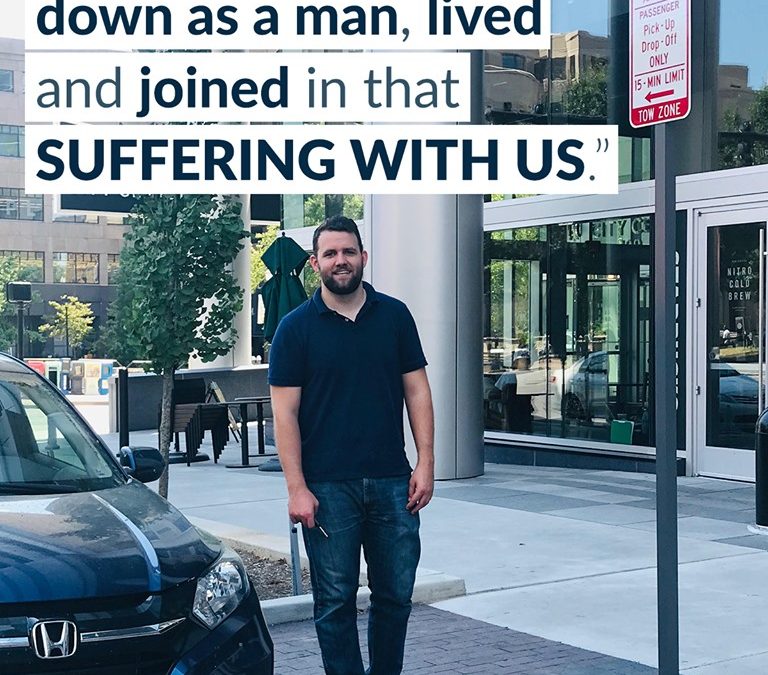 Lexington, KY. Suffering is one of the biggest hurdles that many encounter in their growth in relationship with God. If God is truly good, why is there suffering? While it is somewhat of a mystery as to why there is so much suffering, we do know a few things: 1) suffering is a consequence of original sin, 2) it is also a consequence of free will, 3) Our Lord chose to suffer for our sins, and 4) He has great compassion for the pain we endure every day. That alone should give us comfort, as it did to a man from Kentucky in today’s story.

The following report comes from new team leader Chris with our Lexington chapter:

Today, I absent-mindedly parked in a 15 minute parking spot downtown Lexington, KY for almost 3 hours during the SPSE outing. Miraculously I didn’t receive a parking ticket! But the more important miracle was the Holy Spirit reached out powerfully to several people during our outing. A man named Johnny was warily eyeing our “Need Prayer” sign from a distance when I was setting up so I asked him if he needed prayer. He reluctantly approached and told me he believed in God but struggled believing in Jesus and was angry at God for taking his mom from him when she was young (she apparently deeply loved Jesus). He asked me if it was wrong for him to pray to God when he is angry, bitter, and hurt. I told him it’s OK to be angry with God in prayer and that in some of David’s psalms, he expressed anger and frustration with God and yet God did not give up on him.

Next, he said he also had a hard time believing with all the suffering God allows in the world and that he knew the answer to that was free-will but that answer wasn’t good enough for him. In response, I told him the mystery of suffering can’t be fully explained now but God will reveal this fully in the end. Then, I related to him my Army experience and how I had to follow the orders of many good and bad leaders. Very often I was ordered to do tasks that included a good bit of hard work and even suffering. In that, there was only one Army leader that truly inspired me and motivated me to live by his example. He accomplished this cause he was the only leader I had that would give us an order/task and then roll up his sleeves and get to work in helping us complete the task. Even when it was back-breaking and often required suffering. Seeing him “get-to-it” inspired us guys to do the often difficult tasks with eagerness and even a sense of joy.

I explained to Johnny that this is what God did through his Son Jesus Christ. He not only calls us to live holy lives even in the face of suffering, but he came down as a man and lived and joined in that suffering with us. He didn’t leave us here to suffer on our own but came down to lead by example and suffer even to the point of death. It’s so weird and wonderful at the same time because all this came to me in that moment and was the first time I’d even thought of that example. It was probably the best I’ve ever spoke in my life. At this point Johnny was tearing up pretty hard. We prayed together and I believe he had a deep encounter with God at that moment.

We had a few other people come along throughout the day. One man named Josh approached who seemed to know quite a bit about God, Angels and the Trinity but had struggles with other things like Our Lady. Patsy, Debbie and I had a really good conversation on the Blessed Virgin Mary which ended in him better understanding and acknowledging her importance. He also said he really enjoyed reading so I gave him one of my Rome Sweet Home copies and left a note with my number in it. It was a slow day, but a really good day!

Praised be Jesus Christ! Whatever suffering and hardships we endure on earth, we can take comfort in the promise mentioned in 2 Tim 2:11-12: “This saying is trustworthy: If we have died with him we shall also live with him; if we persevere we shall also reign with him.”