“Called to be Faithful” 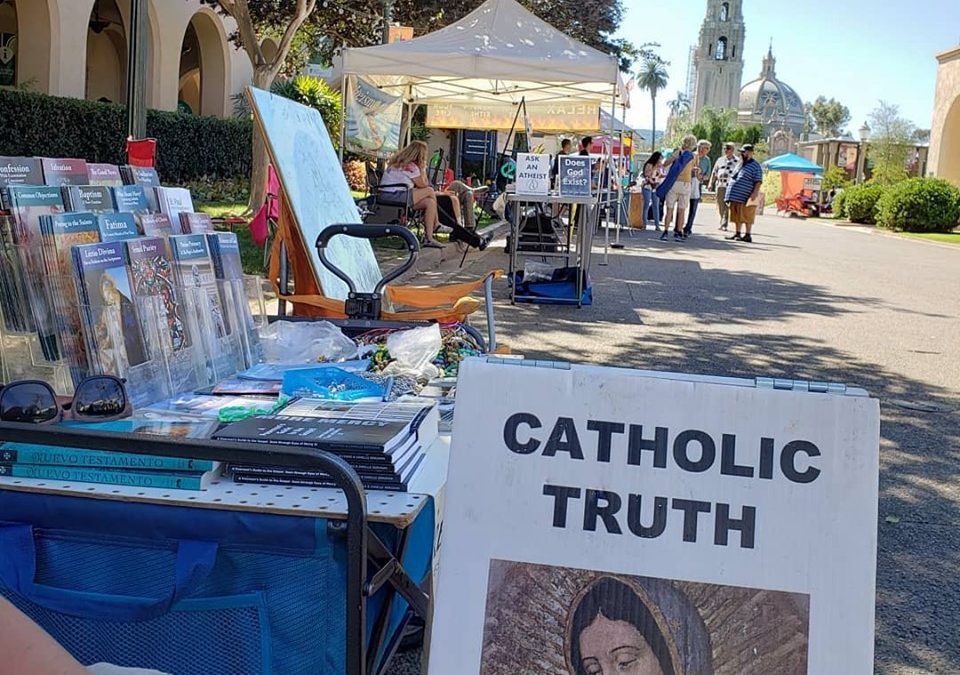 San Diego, CA. Balboa Park in San Diego is an amazing place situated on 1200 acres of land. It’s a refuge for residents and visitors alike so they can relax and enjoy God’s creation. It boasts over 16 museums, several performing arts venues, trails, luscious gardens, and the world-famous San Diego Zoo! That’s where 12-15 million people go to recreate each year, so of course, that’s where you can find SPSE talking to people about Jesus.

The following report comes from evangelist Reggie and the San Diego – Central team:

Last Saturday was a beautiful day for evangelizing. Unfortunately, no one else was available, so it was just me and the Holy Spirit this time. I went out to Balboa Park to see if I could strike up some conversations. When I got to the park all the shady spots by the koi pond were taken by other vendors. There was one shady spot open a little further down, but next to the Atheist group. The Atheist group is always about 5 or more people strong, there from 10am till 5pm or longer every Saturday (I admire their faithfulness).

I’m not intimidated by the Atheist group. I’ve had some good conversations with them in the past and know a few of the regulars, but I usually like to give them their space. I prayed about it whether to set up next to them or somewhere in the sun and I got prayer to set up next to them. (The funny thing was, I didn’t realize, directly on the other side of them was the Christian Group.)

Who knows what effect I had just by showing up and obeying what I received in prayer. But as Mother Teresa says, “God does not require that we be successful only that we are faithful.” I had an awesome time street evangelizing, and later on had some great encounters with a few people. One last thing — the three palm trees were right in front of where I set up and reminded me of the Holy Trinity and that God was with me.

Praised be Jesus Christ! What a confidence boost it is to remember that we only need to be faithful to what God is asking us to do, and knowing that He will reward us for it. “May the Lord repay every man for his righteousness and his faithfulness…” (1 Sam. 26:23) Let us abandon our selfish wills to the will of God, who only wants the good for us!