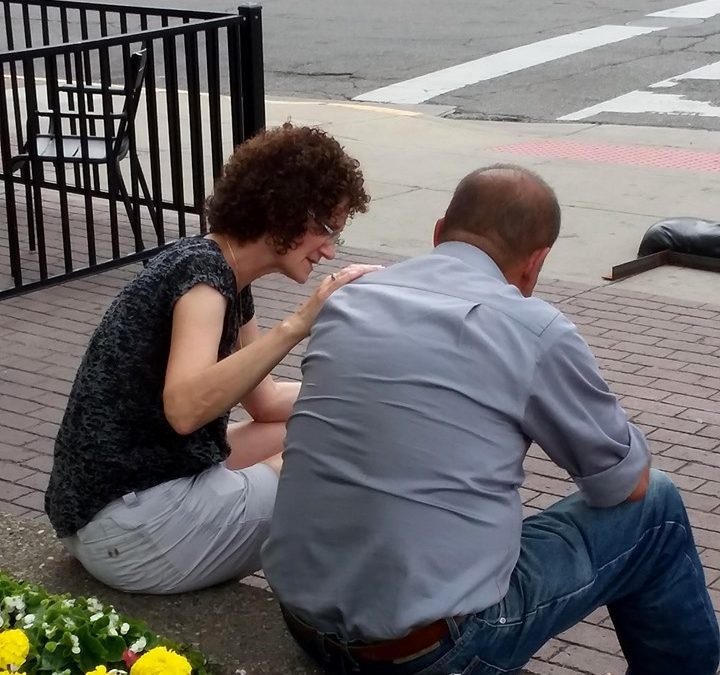 Royal Oak, MI. This story comes from SPSE evangelist Anne: Joe started our longer conversation this way after watching us evangelize for a little while. He sat in the outdoor seating of the coffee shop. I went to the edge of the seating area and offered him a rosary after greeting him. He accepted the rosary and a brochure and said, “ I’ll study this”.

A few minutes later I went over to him and he asked, “What does Mary look like?”. When I’ve gotten this question before it was from people who insisted that Mary did NOT have blue eyes and blond hair like some depictions of her. I prayed and simply said, “Mary was a young Jewish girl so she most likely looked Jewish.” Joe went on to tell me his story which included being baptized as an infant and then again as a Baptist. His story also included an incident from 1984: He had the feeling as if he was going to die and go to hell after smoking a marijuana joint that was laced an extremely strong drug. Because he did not want to die and go to hell he made a gesture (he showed me) with his hand.

This gesture (and whatever he said while gesturing) were a call out to God for help. In an instant, all the effects of the drug were gone! And then A Woman appeared to him! She had blue eyes and golden hair. He wondered if this was Mary. Now I understood why he was asking me about how Mary looked. I listened intently and encouraged him in his faith walk especially how he could easily return to the faith of his family (Catholicism). He then accepted prayer for many things including for his COPD and the effects of a past stroke. He was not in any pain but felt his walking had suffered after the stroke. After prayer, he did not want to stand up and walk to test his legs. I encouraged him to and finally, he got up. “I’m going to walk to that bench and see.” He pointed to a bench across the street. He never returned. Another life touched through loving conversation.