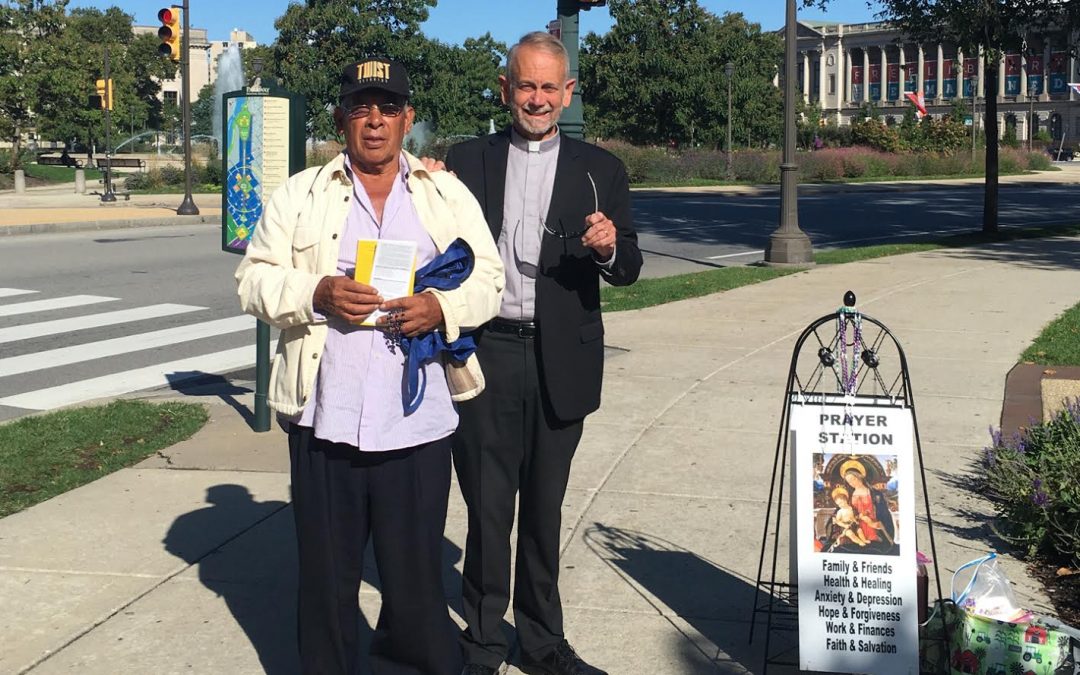 Philadelphia, PA. One of the seven spiritual works of mercy is to comfort the afflicted. Today’s story features a Deacon and a team leader doing just that: comforting two homeless men who need some kindness, encouragement, and a little catechesis.

The following report comes from the Lower Bucks team in Philadelphia:

After attending the 8 AM Mass at Saint Christopher in NE Philadelphia, Nancy and I headed down to the cathedral in Logan Circle. The skies were bright blue and the air temperature was pleasant, so we set up our equipment on Logan Circle. We only had to wait a minute before we had two visitors to our stand, and we had two very long but powerful encounters: Nancy with James, and Mark with Gary.

James was born in Taiwan of mixed Chinese and American heritage and is now homeless in Philadelphia. He is extremely articulate and intellectually curious and asked Nancy many thought-filled questions about the Catholic faith. James talked animatedly with her for more than 45 minutes and accepted a Bible and religious medal before heading off to the nearby park.

Gary, whom we first met three weeks ago, has been living in Logan Circle for six weeks. Gary lost his three-year-old son Luke to leukemia on July 7th, 2018. Exactly one week later, he lost his fiancee Amy (Luke’s mother) from a heart attack. Gary was born and raised in a troubled family in Kentucky, became a nurse working in pediatric oncology, and eventually moved to California. He fell into a deep depression after the death of Amy and Luke, and headed eastward to reassess his life. Gary has all his belongings in a backpack and became so despondent yesterday, his 46th birthday, that he climbed onto the side of the Walnut Street bridge, ready to leap to his death. After resisting the temptation to end his life, he went to Jefferson Hospital for assessment, but they turned him away because he is legally a resident of California and was told he should return there for treatment. I spent more than an hour talking with Gary, got him a cup of coffee, and then headed over to the cathedral to give him a tour. Gary was raised Baptist but listened attentively to my explanations about Catholic theology and worship, and we spent a good half hour in the cathedral before meeting up with Nancy. We showed him how to find Catholic Social Services, and after we got home, Gary sent us an e-mail from a main library computer. He thanked us sincerely for our help, and promised to seek assistance. On Monday, he was given a one-way bus ticket back to Los Angeles, and he should reach the west coast by Thursday. He will still need lots of prayers, as he needs to get on his feet and back to work.

Praised be Jesus Christ! Rarely do we encounter someone who has been through the wringer like Gary. Thank God our Lower Banks team was there to show the face of Jesus to a desperate soul in need. May this story inspire all of our evangelists to go the extra mile for those we encounter.